Boba Fett and Fennec Shand look for answers as to who has put a target on their backs – but it’s not a short list given those who might be interested in taking over Jabba the Hutt’s empire.

Meanwhile, during one of his medical treatments, Fett’s memory returns to his time with the Tusken Raiders and Sand-People of Tatooine as he forms an alliance, formulates an audacious plan and takes on seemingly impossible odds to stop those who infringe on their territory…

The first third of the series’ second episode – entitled The Tribes of Tatooine – involves a large amount of talking and political posturing as Boba Fett and Fennec Shand make their presence known, looking into who tried to assassinate them. They manage to scare a supposedly stoic assassin – with a nice rancor/mouse bait-and-switch deceit – into some revelations, though it’s a minor step-forward as we learn that the Hutt family is seeking to reclaim Jabba’s empire. This is an excuse to bring on two said members of that dynasty, one of them female (though I wouldn’t want to be the one who had to check). Their carriage through the streets of the sandy enclave is, inevitably, the work of CGI and the result is about what you’d expect. There’s always been something that works on a more physical, animatronic level for this specific species of monster, the post-production pixels somehow softening their sheer and obese beastliness. They snark and insult and shift sweatily on their platform, but they don’t really scare or intimidate. Much more interesting is the brief if silent screen-time given to Black Krrsantan, a legendary wookiee and mainstay bounty-hunter held on retainer by the Hutts. The character actually originated in Marvel‘s Darth Vader and Doctor Aphra comic titles and it’s interesting to finally see a live-action version… one we’re likely to see more of given his history and prominence here.  The appearance of the wookie and the Hutts seems to be laying groundwork rather than pushing the story forward with any major events. Ming-Na Wen once again makes her presence felt, but though she could be just as important to the series as the title character if treated better, she’s not asked to do as much in this week’s chapter as one might like.

A majority of the episode is more physical and faster-paced, taking place in the ongoing flashback format (with Fett once again submerged in his medi-tank and reliving his tale of survival post-Sarlacc Pit).  In this case it continues his time with the Tusken Raiders and it’s a stylistic story that offers the most satisfaction and intrigue. We saw Fett’s capture and cautious alliance with the Sand-People in the previous chapter and here their tolerance of him becomes a more concrete alliance. A group of sharp-shooting bandits regularly speed through the area on a gravity-defying train, randomly picking off the nomadic tribes and a weathered Fett sets out to oppose them and make the lands safer for those who have taken him in. The Tusken Raiders get fleshed out more, their societal ways under closer scrutiny and depicted as far more than the opportunistic savages from A New Hope – definitely drawing parallels to North American Indian communities as the frontier encroached on their land. Even their specific gait is noticeable and there are some scenes when it’s possible to tell the gender of the heavily-wrapped Raiders simply by the grace with which they move.

It’s impossible not to note the influences that inform the scenes that follow. Firstly, there’s the nod to 50s’ biker movies (as Fett takes on a group of bullying Nikto reprobates in a neon-hued diner), a sequence that also giving nods to classic western bar-brawls. Then there’s the outlier’s journey into acceptance with the tribe that spared his life (think A Man called Horse or – if you must – Dances with Wolves). Finally there’s the rites of the samurai/ronin (as he gains his weapon, forged in the flames that lick around a recreation of a classic Ralph McQuarrie concept painting).  It’s not a case of huge originality being displayed, but there’s certainly a deft hand at paying homage to those classics as they blend seamlessly from one to the other and the genre traditions of lone wolf anti-heroes and their pain-filled journeys.

The biker bar sequence has a lot of in-jokes and nice touches, the scaley antagonists wearing what largely amounts to leather jackets with logos that may have rancor outlines but could easily have been tweaked from the Sons of Anarchy. Morrison’s grizzled Fett strides in like a cross between Brando and Eastwood and makes quick work of the problem and steals their ‘wheels’. Die-hard Star Wars fans will note that the couple Fett rescues are later credited as Camie and Fixer, Luke Skywalker’s old friends who featured in a famously deleted scene in A New Hope which itself was set four years before this episode. The subsequent set-piece assault on the speeding train (echoing many a wild west moment) is well-executed, making strong use of choreography and the cutting-edge VFX capabilities (it certainly doesn’t look like a set with back-projection, though undoubtedly that’s part of the top-notch illusion) and punctuating the fighting with some good physical humour along the way.

One of the show’s most important tasks will be not just showing the past and the present of the man called Fett but convincing audiences there’s a believable through-line – at the moment they seem quite adrift. The contemporary Fett, claiming to be a benevolent dictator is far more ‘talky’ than in his past and seems somewhat ill-at-ease in the way he presents himself – it’s easy to see why competitors feel tempted to usurp him before he’s begun to consolidate his position. It’s like watching a Sergio Leone western era Clint surgically joined to later Eastwood outings – it’s easy to see some common thematic ground and reflections but also the notable gaps between the skin-deep seams.  Later Fett seems quite far removed from the weathered, in-your-face survivor we see in the flashbacks and – frankly – far less interesting so far.

There’s much to like here and a lot of groundwork being laid out, but like all Disney+ shows of the last year or so, the wider judgement of its success will only come as we get a better idea of direction and pacing and whether it is ultimately the sum of its many beautifully-rendered but not always smoothly interacting parts. 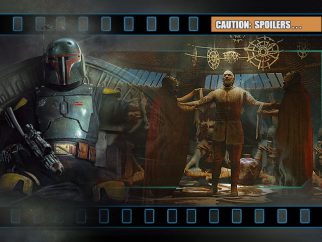