The third episode is full of pop-culture references and nods, paying homage to heritage - but forgets to name most of its new players....

As Boba Fett and Fenecc Shand continue to investigate who is standing against them, it becomes clear there’s competition for that position – with Mos Espa now divided into three areas of shady commerce. But as Fett takes his regular medical-bath to heal old wounds (and remember deep, emotional scars), one of those forces suddenly moves against him.

On a desert planet like Tatooine water was, is and always will be a valuable commodity, but can it be used to entice some unlikely allies to work with them against the Fetts’ interests…

There’s a lot in the latest episode of The Book of Boba Fett which should feel major, significant and dramatic – so it’s disappointing that with all the talent involved it feels more journeyman in its execution than it should. It’s… fine. But that’s about it.

It might be due to modern expectations and the behind-the-scenes post-production values that Lucasfilm have already demonstrated, but inappropriate levels of ‘speed’ seem to be an issue in this episode. On one hand Fett riding the Bantha into town (and back) seems a very slow, unnecessary method of transport that barely reaches walking pace at any point and seems selected for a good visual rather than practical purpose. Equally the eventual chases through the Mos Espa streets feel as artificial as the connective tissue you’d find in the back-drop of an amusement park ride… yes, they’re packed with people, aliens and nice-set decoration but the vehicles and their formula motion are moving far too slowly to create any real tension. The wheels may have been CGI’d out later, but this looks like another example of returning director Robert Rodriguez wanting to have tweaked practical effects and orchestrated camera-angles wherever possible… and that simply makes the chase more clunky and less daring than the wholesale, more sweeping CGI we know is possible. All the ‘gags’ are set-up in unapologetic fashion – various stalls are knocked over, pedestrians run for cover and there’s even that ‘two-workmen carrying a heavy load’ routine – in this case what looks like a Ralph McQuarrie production painting – where it’s split in half by the chaotic run-through.  It’s a chase being played for laughs, with fugitive Mok Shaiz’s Majordomo (David Pasquesi) often gurning and frowning almost directly into camera. but it really doesn’t work as well as you’d hope, even on that level.

Reversing the last episode in formatting, there’s actually very little of Fett’s flashbacks. In somewhat disappointing fashion, the build-up of the Tusken Raiders as more than the previously-seen barbaric race… actually a tribe full of tradition and nuance, seems instantly wiped away. The individual characters we’re beginning to invest in are slaughtered off-camera and the development feels like an icy case of tropey fridging under an unforgiving red-hot sun. Yes, it provides motivation for Fett (though we haven’t got to see the pay-off  as yet), but really wastes an opportunity to give some depth to the supporting cast of characters.

That’s somewhat true of the contemporary support structure in Mos Espa. Going to a street-level dynamic both in title and execution, would seem to open an interesting window into the nitty-gritty and dusty nooks, crooks and crannies that a writhing hive of scum and villainy would populate. After all, one of the show’s central themes is Fett taking over a dirty-handed criminal enterprise which, however you want to spin it, certainly isn’t based on pure altruism. There’s a lot of exposition and talk of split-territories, allegiances and retribution, but there’s never a moment when any of the chase through the streets and alleyways feels truly dangerous. One can only expect so much from a Disney+ series designed to attract all ages, but the story itself skews older and needs that edge. This is a disappointingly average PG representation of an enclave that should at least hint at R-rated concerns just off-camera. The ‘Mod Squad’ hired by Fett feels like a punchline that quickly becomes indulgent. It’s all well and good giving a nod to a street-gang that use the Tatooine equivalent of vespas, but the costuming, design and the umpteen mirrors on one of the models are so ‘on the nose‘ they’re already halfway up the nostril. For a non-Earth planet situated in a galaxy, far far away, it’s another aspect that feels too much like a needy pop-cultural joke more than a clever aside. (Frankly, five minutes of the punkish reprobates of the animated Arcane season felt far more fully-rounded and three-dimensional than the screen-time given to Fett’s live-action and vividly-attired Irregulars).

It’s a nice surprise and delight to see one of Rodriguez’s go-to actors Danny Trejo taking on a supporting role, grizzled and intimidating in his look as usual, but also bringing that more soulful and understanding aspect as an un-named Rancor-handler giving Fett the Star Wars equivalent of pet-care. It looks like he may stick around for a while. As the raft of new supporting players appear, mainstay Ming-Na Wen, one of the show’s greatest assets going in, is still being somewhat wasted. It’s highly likely that we’ll get an episode centred on her before the season’s over, but so far she’s been little more than an enforcer who looks disapprovingly at Fett’s decisions yet stands loyally by his side kicking the occasional bad-guy.

In an episode where we rush from one thing to another without the sense of true consequence, there’s some good hand-to-hand combat between Fett and long-haired wookie bounty-hunter Black Krrsantan (Carey Jones) and it takes multiple characters to bring him down. However, by the time the episode’s done and the Hutts have basically left Fett to decide how to dispose of their ‘assassin’, Fett simply lets Krrsantan go, almost as a professional courtesy and certainly not in any way that makes a lot of sense for his self-preservation. Yes, this enables us to see the character again (he’s become a fan favourite and The Mandalorian itself made sure all the anti-heroes eventually did the right thing)), but to be honest, Fett going so far out of his way to NOT kill his opponents while complaining about looking weak doesn’t sit very well.

The third episode whizzes along with pop-culture nods – but in doing so it’s telling that it forgets to even name most of its new players and that sums up the problem that the Jon Favreau-scripts and Robert Rodriguez episodes seem to have – lots of ideas but no deeper throughline (yet) on exactly the tone and story they want to tell. Gangster-flick? Samurai-screener? Western frontiersman? Family-friendly actioner? It’s nice to have the nods and homages, but sooner or later The Book of Boba Fett will have to decide where to spend its page-count and plant its foot-notes… 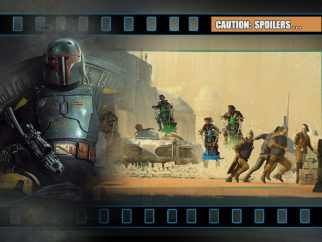