All FX, no cause: Pointless Wachowski ‘Resurrection’ offers no new ‘Trix…

Metatextual 'Matrix' is a hollow-gram revival that can't think outside the box-office...

Thomas Anderson is a game-developer who is being pressured to write a sequel to his best-selling ‘Matrix’ games. He is surrounded by young acolytes who muse about the deeper meanings of the franchise and takes medication to keep him from obsessing too much about his nightmares, but still has deniable flashes of deja-vu. The woman who drinks at his local coffee-shop seems eerily familiar and somehow he knows kung-fu without knowing where he learned it. But that sounds like crazy-talk, right?

And a world away, someone is watching. Someone is always watching. It’s decades after the death of Neo and Trinity, so how can those personas still exist in a twisted form in a small part of the creation known as the Matrix?

Perhaps Neo is not quite as dead as everyone believed, but if Thomas Anderson can’t save himself, he’s going to need help…

Many years ago I interviewed Wes Craven who was releasing his eponymous ‘New Nightmare‘ into multiplexes. After several Nightmare on Elm Street sequels and their box-office proving nothing to lose sleep over, he took the rather inspired idea of rebooting the tale and making it the story of a powerful force that transferred over from the ‘fictional’ films into the ‘real’ lives of himself and original star Heather Langenkamp, essentially the existence of the original films creating the monster that would be the heart of this new approach.  It was an interesting idea and pivot of tone, if not financially successful enough to revive the franchise fortunes.

I was initially reminded of that approach when sitting down to watch The Matrix: Resurrections, a release that that’s ultimately more like a desperate, attention-seeking meme made flesh than a tentpole movie. While Craven’s imagery might have been a creative way and narrative twist to breathe new life into an iconic idea and say something else, Lana Wachowski returns to her and her sibling’s cyber-classic (a milestone movie followed by two sequels of often diminishing returns on both a creative and financial level) boasting no such lofty ambitions.

The final film of the original trilogy basically killed off most of its cast and closed off the story, so to stagger back into cinemas, the concept has to be refined, reboot, remastered and regurgitated. Thus we find Thomas Anderson as a programmer kept in check by his employer and who has dreams of flying. Or are they? The first half of Resurrections is less a set-up than a string of in-jokes, name-checking all the original characters of the franchise and re-establishing them as possible game constructs created by programmer Thomas Anderson (Reeves) – with even Warner Bros. allowing itself a few self-referential hits as characters mope around talking about their ‘art’ and bemoaning demands for an updated sequel to the concept. Or are they? The film sets out its ‘what’s real, what’s not?‘ premise by doing everything except wink to camera about its own cleverness while the older audience sighs and waits for things to get interesting and the younger audience ponders if they should have gone to see Spider-man. The Matrix may have famously introduced the opportunities of bullet-time and freaky, kinetic camera-angles, all of which it reproduces and tweaks here for your enjoyment, but the industry has taken up the baton and run with it in the decades since – the likes of Inception, Spider-man and Doctor Strange have been even more mind-bending and gravity-defying.  So, while Resurrections boasts an unlimited supply of physical twists and turns, some of which they acknowledge are pre-existing conditions, they come across as decoration and affectations, there to make pretty up the illustrations of the illogical story.

It would have been wrong to expect Shakespeare from a concept grounded largely in ever-devolving pseudo-psychology, camera angles and post-production techniques, but the most frustrating thing (apart from losing nearly two and a half hours of your time for this) is that there was an actual, real opportunity here to make something interesting and relevant. In smarter and more savvy narrative and directorial hands, one can imagine a true and timely, even satirical Matrix revival that spoke to modern consumerism, mass-media and the cowered masses tilting towards whatever demographic windmill instructed – nothing less than a They Live! for Generation Oculus.  For a little while, you hope that its overt self-awareness means it is going there. Instead, the only reinventions that transpire are the formulated excuses needed and presented to wring out one more drop from a long dry source. That’s personified and demonstrated by intercutting original footage from the previous films at key moments and then re-enacting them with some of the new supporting cast. It’s a rinse-and-repeat formula that eventually can’t hide the lack of momentum and the head-scratching effort made to justify such a running-time that contains no coherent story, just set-pieces.  To be brutal, this is nothing new…the Wachowskis are now to action epics as M. Night Shyamalan is to twisty thrillers – lightning-in-a-bottle creators who momentarily reinvented the wheel and then, threatening to further redefine their genres, merely slipped into inferior and indulgent, bigger-budget offerings that only spoke to their limitations (think Speed Racer, Jupiter Ascending and Cloud Atlas). Put aside the distracting, dancing pixels and Resurrections is simply more of the same, navel fluff portrayed as stardust, less Oculus Quest and more Commodore 64, a film that screams ‘This isn’t your grandaddy’s Matrix…‘ while simultaneously telling you to get off its digital lawn.

Good blockbusters have a clear journey, a cause or a quest, but Resurrections‘ imperative is far more muddled. It would be hard to explain the plot as any more than ‘An awakened Neo sets out to find Trinity‘ because for all the profound introspection and world-building that the film-makers dream of, they can’t deconstruct what they haven’t bothered constructing first. Everything that needed saying – and so much more – was addressed in the original trilogy and so Resurrections wanders around either repeating its ‘greatest’ hits or lampooning them like a never-ending SNL sketch. The virtual vistas of the machine-world into which Anderson/Neo reawakens are rendered as perfectly as ever: dark, swirling masses of tendrilled creations and askew skyscrapers – but they are also the least interesting element. If this is the ‘reality’ that’s raging against the machine then it’s a miserable, dangerous, bleak and uninviting neighbourhood – so what exactly are we fighting for? The cause may be to ‘live free or die..!‘ but if so, it only speaks to the possible attraction of living a far more pedestrian, recognisable world where there may be overseers but at least they serve Starbucks. By the time we get to the end, the only resolution is for Neo to put Trinity ahead of humanity and then for both of them to remake the world to their own whims – and frankly, that goth-lite leather-look is SO last century.

What works? There’s some solid production-design in both the cyber-world and the ‘real’ world and camera-work to enhance it, though its inconsistently apllied. A large percentage of the hand-to-hand combat is well choreographed and approached with steely-determination by a cast who can handle some of their own stunts (applause to Reeves and co-star Jessica Henwick, late of Iron Fist, for their commitment to that side of proceedings). Though Hugo Weaving and Laurence Fishburne both (wisely) passed on the opportunity to reprise their iconic roles, Jonathan Groff  and Yahya Abdul-Mateen II, respectively, do respectable jobs  though neither supplants the original, just supplying their own brand of cool detachment. The always welcome Neil Patrick Harris sneers a lot, but his dialogue runs solely on snark and eventually runs out.

By the end you won’t so much be thinking ‘What about…x?‘ but rather ‘What was ANY of that about?‘  The answer is nothing. The holograms are hollow. There are martial-arts outings with more street-smarts, blockbusters with more art, computer games with a more substantial half-life and religions with more coherent doctrines. However, as a measure of virtual vanity projects, it’s hard to beat the commitment to decorating the void… 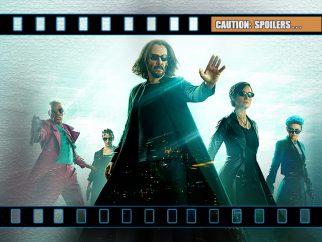