Discovery gazes into the void and the void bites back as the ship looks for a way out of its becalmed status...

The Discovery’s latest mission to investigate the damage left in the wake of the mysterious anomaly, a tear in subspace. But having ventured through the tear, the ship and crew find themselves in what appears to be an empty void with no obvious way to get back out. As both Gray and the ship’s sentient computer ‘Zora’ struggle to deal with their respective new status and Book’s survivors guilt becomes manifest, Burnham faces more hard choices.

Alone on the bridge, she’s about to experience some cosmic stormy weather of her own…

Jonathan Frakes helms the latest episode, entitled Stormy Weather, the closest thing to a pair of safe hands as you can get – an actor and director with a knowledge of the craft and the universe to which he’s returning. This is another episode of Discovery that feels like a large portion of it could almost have been written for any previous incarnation of Star Trek – a ship stuck in in a cosmic dead-end and racing against time to find a way out  – in fact there’s a couple of obvious episodes that immediately spring to mind and some of them are referenced. The idea of a dark and empty ‘gap’ in which Discovery can detect almost nothing, including its boundary, admittedly saves a little on the usual barrage of VFX, but also allows the ‘action’ to be largely internalised, with many earnest conversations to be had. (There’s also some echoes of The Langoliers in the way that an ever decreasing boundary appears to ‘eat’ anything into which it makes contact).

And that’s mostly what this episode is: for better or worse, walk and talk with some decorations. That’s not to say some VFX aren’t needed and an implosion/explosion/hull breach around halfway through the episode (in which a crew-member is lost) is presented in a quick, hard, fairly brutal way that leads to some serious questions about Zora’s handling of the situation (technically the ship’s computer was likely right in the fast response, but as a literal second would have made all the difference it’s an uncomfortable moment).

The notion of Discovery’s computer – now formally calling itself Zora – becoming sentient is one of those threads that has been around for some time, somewhat introduced in the flash-forward Short Trek minisode Calypso (also voiced by Annabelle Wallis) in 2018 and then a slow-burn aspect ever since the resolution of the Control storyline at the end of Season Two. But it’s also an element which has never felt particularly earnest. It occasionally gets lip-service, but what would seem to be a narrative of huge import has often been reduced to a few lines of dialogue and simply an addition to a ‘must-eventually-check’ list as other story-lines take the spotlight.  As a strong staple of sf, the idea of evolving AI rarely works out well for it in the end (an aspect we’ve already seen in Discovery‘s Season Two battles), usually ending up in de facto annihilation or sacrifice… so it feels as if, now introduced, the show really hasn’t wanted to decide how it’s going to address the obvious implications. This episode at least suggests it can’t be ignored much longer, though whether this will tie-in to the main anomaly story-arc remains to be seen though clearly there are already links to Calypso – none more so than the return of Zora enjoying some truly nostalgic musical memories, this time with a haunting rendition of the Etta James / Lena Horne classic of the title. (There’s also some connective tissue, allowing the loneliness that Gray – Ian Alexander – is feeling since becoming corporeal, being essentially a passenger on a military-structured vessel, to be matched with Zora’s own ‘feelings’ about how she/it fits in.  That Gray helps Zora to focus on what the short-term needs and long-term issues so that the two don’t conflict and overwhelm is useful advice for both of them).

How Book(er) is dealing with the recent massive losses of his homeworld and family now seems to be one of the ongoing themes of the season. While it’s good that such a loss isn’t conveniently solved in one episode, it does feel that issues of survivor’s guilt and innate anger seem to be cyclical with something triggering him every episode and advice being given thereafter. Here, after getting nearly electrocuted by feedback from the spore-drive, he starts seeing ‘visions’ his late father – with whom he didn’t have the most healthy relationship – and that dysfunctional dynamic continues with Book being told he’s wasting his time with Michael and that a real man would be going after the cosmic bad-guys. Book’s wise enough to know that’s not true, though it likely speaks, once again, to that inner turmoil about action and inaction as they all search for answers.

The episode, with its high-stakes and Michael alone on the bridge facing almost certain death, almost feels like a season finale in its execution… though it won’t be until next week that the show reaches its mid-season finale (in itself something of a surprise as even the likes of IMDb had it running on consecutive weeks for its entire run). The upcoming break seems likely to be on account of COVID restrictions and post-production time. After a short break, the show will return for the rest of its episodes in February 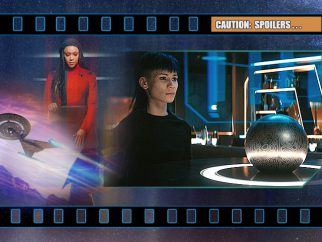 All FX, no cause: Pointless Wachowski ‘Resurrection’ offers no new ‘Trix…