Less ambitious in cosmic scale, 'What if..?' shows how Killmonger's revenge plans could easily have gone differently...

During a promotional tour to Afghanistan to help his company’s arms-sales, Tony Stark’s convoy is attacked. But in this reality, Stark is saved by the intervention of Navy Seal Erik Stevens, nicknamed ‘Killmonger’ because of his efficiency.  Stevens quickly becomes Stark’s right-hand man, exposing corruption within the company and making himself invaluable, even inspiring Stark to work on nanotechnology and  a robot army that wouldn’t need human pilots.

But ‘Killmonger’ has his eye on a bigger prize. Far away, hidden in the mountains of Africa lies the land of his birth and a birthright of which he feels robbed and betrayed: Wakanda. And all he needs to return there is a robot army, the support of the American government and lack of witnesses to the details of his long-game…

The latest What If..? may prove something of a marmite entry.

While many forays into alternative realities deal with cosmic-level ramifications and universal scenarios, it’s worth remembering that the original source-material comic frequently played with events that might be pivotal story-arc changes for the fate of its characters, but the results of which were ‘different’ rather than world-ending.

So it is with ‘What If Killmonger had saved Tony Stark?’ The stakes here are lower by comparison to some recent entries, though they still involve death, betrayal, war and big nasty robots. But the tone is far more personal. In the Black Panther live-action film we saw Michael B. Jordan’s take on being a pro-active soldier and a ruthless strategist and a character who feels – perhaps with some justification – that he’s been wronged by the land of his birth and unfortunately seeks brutal retribution.

That version pales in comparison to the groundwork that this version of Navy Seal Erik Stevens undertakes. Joining the dots between two important MCU movies, at first it’s not clear if this version of Stevens/Killmonger is going to be more heroic – he does, after all, save Tony Stark from the attack on his Afghanistan tour convoy (rotoscoping several scenes from the original Iron Man outing). This world, then, doesn’t get an Iron Man, Stark’s epiphany and course-correction never taking place due to his lack of capture – in fact, quite the opposite. But even as Stevens exposes the machinations of Obidiah Stane, Tony’s mentor (and the villain played by Jeff Bridges in the film, providing its climax) it’s soon clear that Killmonger is equally manipulating those around him. There’s a certain satisfaction into seeing more of a character who was only given a certain amount of space and time in one singular Marvel movie, flesh out his motivations and duplicity in just thirty minutes of animation. (There’s more characterisation of Jordan’s character – or, if not more, then better illustrated – in the first five minutes here than for Benedict Cumberbatch in the whole Dr. Strange entry). And for all that Killmonger is a decorated solider and fighter, it’s that manipulation of people’s egos in which he excels. Though the billionnaire is no push-over, Killmonger ultimately plays Tony Stark like a fiddle and before Stark can stop events, he’s already sealed his fate on the end of a spear and there’s already an army of robots in the works for which our bad-guy has world-shaping use.

This a thirty-minute blueprint of warfare: political and industrial machinations that go from Afghanistan to Wakanda and work as an almost Shakespearian tale of duplicitous power-grabs and could have well have done with a longer running time to fully satisfy (a complaint of several entries in the run that seem either rushed or incomplete in their exploration of a one-line pitch). In this alt-history, Stevens’ plans, consistently underestimated by others, work almost perfectly and by the end he’s engineered a multi-level tale of revenge that sees him controlling the world’s most advanced country and army and able to stare down America.

There’s some timely inferences here. The opening salvo re-showing Stark’s journey through Afghanistan comes weeks after America finally pulled out of the area and the exploration of the US war machine (rather than War Machine) as well as its over-confidence in its ability to take on all-comers (especially those it considers inferior and ill-equipped to stand up to them, until shown otherwise) is pretty scathing.

Animation-wise it’s decent, as usual – with some nice nods to anime for the robots – but once again key scenes are lifted from the MCU movies and tweaked to fit. The voice cast is impressive. Returning names include Michael B. Jordan as Killmonger, the late Chadwick Boseman as T’Challa, Angela Bassett as Queen Ramonda, John Kani as King T’Chaka, Andy Serkis as Ulysses Klaue, Danai Gurira as Okoye. Jon Favreau is Happy Hogan, Paul Bettany is JARVIS, and Leslie Bibb is reporter Christine Everhart. True, there’s no sign of Robert Downey Jnr, Gwyneth Paltrow or Jeff Bridges but they are ably replaced by the impressive vocal talents of Mick Wingert, Beth Hoyt and Kiff Vandenheuvel, respectively. Don Cheadle once again essays James Rhodes, though if you’re going to get technical, it should probably have been Terrence Howard.

There’s quite a few lessons for What If..? to learn before a second run next year, but if it combines some of the narrative blueprinting from this episode with the scale of some of the other entries… and perhaps increase its running time so as not to short-change its actual strengths, there’s every reason to think this anthology show could start to build something as epic as the prime MCU. 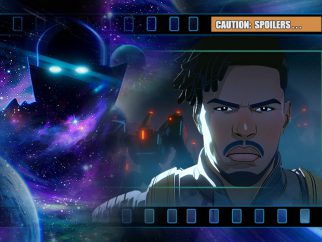