"He's behind you!!!" James Wan's latest veers between stylistic shots and some truly ludicrous plotting...

Madison ‘Maddie’ Mitchell cuts a tragic figure, a woman who has had multiple miscarriages, at least some possibly at the hands of Derek, her violent husband Pregnant again, she’s the victim of abuse and has her head slammed into a wall by Derel. She finally locks him out of the room and he slinks off to the couch. But hours later he’s woken by noises in the kitchen. However the shadowy, distorrted figure he sees doesn’t appear to be Madison.

Madison awakes the next morning to find Derek’s twisted body, the presumption by both herself and the police is that it’s the work of a sadistic intruder. However as there’s no sign of a break-in some suspicion falls on Maddie herself, though the police can’t find any proof. In the days that follow, several murders are reported, medical personnel whose bodies are left in the same broken way as the murder in Maddie’s flat. each time, Maddie perceives the events like a vision, unable to interact with the carnage but ‘seeing’ every detail.

With suspicions rising against Maddie, despite her having alibis, Maddie and her sister Sydney set out to find out about Maddie’s connection to the killer… but as secrets from Maddie’s past come to light and memories from before she was adopted begin to surface, it seems that her (presumed’ imaginary companion ‘Gabriel’ is now a force to be reckoned with…

Malignant is another of those many recent screen-experiences where it’s possibly to acknowledge that there’s the glimmer of a good idea somewhere in the cells of its premise, but that any chances of a positive diagnosis have long since been eclipsed by the poorly executed procedures and ludicrous plotting.

James Wan is a writer/director responsible for notable entries in several franchise titles. He’s the man most closely associated with the grand-guignol Saw, the ‘slightly-inspired-by-reality’ The Conjuring 2 and the inventive Insidious movies but also at the helm of blockbusters such as Fast 7 and Aquaman….. Here it seems he’s merely on low-budget autopilot: visually inventive as always but with minimal interest in any sort of consistent story. One hopes that the blend of the bad acting on show (which begins as ‘openly over-the-top’ in the opening scenes and then vacillates between being ‘tropey and cliche’ and just ‘horrendously overwrought’ thereafter) is an intentional choice and a bargain-bin-budget ‘homage’ to earlier eons of the genre and other notable directors (very early DePalma, Craven, Argento and even James Cameron if you must ) also embracing their tropes and flaws rather than their triumphs… because if not, there’s really no excuse for the tonally-adrift mess on show.

If there’s a selling point it’s in some of the visuals – a scene-changing CGI effect repeatedly works well enough and the memorable use of camera-movement and position…one horizontal dolly-sequence shows Maddie running through the house as if you were looking down from above and tracking her progress, offers a fresh perspective (literally) on an obligatory chase sequence. Wan picks some good angles to increase dread and tension but even these, as we progress, become more noticeable as a mood-technique rather than making the film work any better. And to balance any triumphs, there are moments when the scenery veers from enigmatic to just ‘staged’: an abandoned hospital long-shot sees a car drive up to a cliff-edge for no real reason, all in front of the obvious post-production gothic building… and the lighting streaming through a window into a massive apartment opposite the iconic Silvercup sign (hello, Highlander fans) is blatantly a soundstage-light rather than any real ‘outside’ influence. Some of the physical actor choreography and the way it’s lensed works in a retroactive sense once the ‘big reveal'(tm) occurs, but even in that specific case, the ‘hows’ of that choreography are then quite obvious and simply made interesting by flexibility and fast-editing.

Far too many aspects require the ‘only in the movies’ description – singularly, they might have been excusable, but collectively they simply can’t get a pass. The Seattle police-station is vast, but minimally-lit, minimally-occupied, three storey-high cavernous institution with a handful of desks (all with name-plates depicting character names but not their rank?)  – the kind you only see in the movies. A prison sequence sees Maddie incarcerated in a holding tank that’s not only the size of a small NYC apartment (and probably cleaner) but is populated with soon-to-be collateral-damage hookers who look like they’ve been drafted from a 1970s cable show or a very off-Broadway version of Chicago – or the kind you only see in movies. (They had it coming… even the almost-unrecogniable Zoe Bell). When a cop rather stupidly chases Gabriel through the Seattle underground he ends up in an ancient sub-city space inexplicably full of old but intact vehicles including abandoned horse-drawn carriages surrounded by with swirling tendrils of mist (read: Acme dry ice) that floats obediently around knee-level – the kind you only see in movies.

Such cinematic affectations and flourishes would be fine if  Wan could get a real handle on any of the characters that populate his vision, but they flail around like archetypes in search of random traits and prove hard to care about. Annabelle Wallis as Maddie Mitchell should be the centre-piece holding it all together but despite some early promise it’s almost as if the film loses interest in her predicament and instead of empowering her wants to focus on the ‘big-bad’ that shadows her footsteps. ‘Gabriel’ is even more sketchily-drawn, sometimes an ethereal, supernatural presence, sometimes a lumbering grotesque, sometimes a back-flipping paranormal parkour contestant – as if the film wants him to be both face-obscured Ringu reject and vengefully-Janused Jason Vorheese wannabee. The fact that he seems able to control electricity is highlighted on several occasions from the outset, but bears no real importance to the plot, except to add the obligatory ‘uh-oh’ moments when the lights start to flicker. Maddie Hasson (Impulse, Mr. Mercedes) fares just a little better as Maddie’s pro-active sister Sydney, but is largely reduced to being the person whose drive to protect Maddie compels her to join the dots for any viewers who’ve failed to guess the third act. She fits neatly into the ‘Hope she doesn’t die, but…‘ category.

The disbelieving cops, suspicious that Maddie is somehow the person behind the increasing body-count, are firmly from Cookie-Cutter PD. George Young’s ‘Kekoa Shaw’ is alternatively a young, naive and possibly smitten detective and bargain-bin action hero happy to charge into buildings and cellars without back-up because that’s what the script demands. His partner, Regina Moss (Michole Briana White) is the more hardened half of the team with the script’s snarkiest lines and a performance/look that suggests Wanda Sykes was originally approached and turned it down, but no-one else on the production got the memo. Elsewhere, victims hang around waiting to be killed off and the prosthetic and make-up department to earn their keep.

Treat Malignant as a badly-scrawled love-letter to the earlier days of the genre and approach it with the kind of eye-rolling, guilty-pleasure toleration that could only be more on-the-nose if actual eyeballs rolled across the screen, then the result is a beer and pizza movie that may satisfy far lower expectations than its decent trailer, indicating something more coherent, encouraged. (Its ‘pointy’ poster perhaps revealing a truer template). But otherwise, it all feels like a forgotten 80s movie that got re-edited with CGI tech. Sadly, all that 21st century upgrade can’t save this patient and its prospects are terminal. 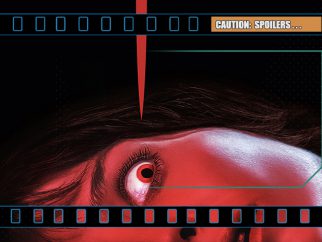