David, Kristen and Ben tackle Unidentified Flying Objects and Leland has a lot on his plate...

The church asks Kristen, Ben and David  to listen to testimony of an air-force pilot that claims an encounter with an unidentified object left her feeling a sense of spiritual peace. It turns out that the Vatican itself takes such incidents seriously and sends someone to assist and gauge the validity of the sighting.

Elsewhere, Leland seeks out both David and Sheryl in separate parts of a plan to solidify his influence… and Kristen has some big personal decisions to make…

The pitch for Evil originally felt like an ecumenical X-Files and though it quickly established as something quite different, the latest episode U is for UFO certainly feels like a doff of the hat to that conspiratorial series.

Ironically the investigation into the sighting of strange aerial craft and the feeling of almost blissful peace they allegedly create, is the least interesting part of this episode – one of the times that the show addresses a ‘phenomena’ or ‘issue’ with only vague links to its main remit of holy dis/orders. The shadowy forces of government intervention (complete with a threatening not-smoking-cigarette man) and their ability to circumvent holy investigations (will we see more of Anthony  DeSando’s Father Katagas?) is not quite as interesting as it wants to be for a show with more ethereal things in mind (and soul). While there’s a few developments that work as a tangent to proceedings, a mention of the almost-forgotten fertility clinic that was a growing staple of the first season, it’s once again the character interactions that hold everything together.

One of the more controversial parts of a deliberately provocative first season was one of the final scenes – Michael Emerson’s Leland openly talking to a traditional cloven-hooved demonic beast in his office – a surreal image but one that seemed to dispense with the subtlety to date. Many pondered that just because we saw it, it didn’t mean that it wasn’t a vision, a hallucination or just symbolism – something that the creators have said may sometimes be the case, including last week’s ‘sex-goo‘). However the events of this episode would seem to suggest the beastie was real and solid enough – otherwise Leland wouldn’t be able to suddenly behead it and serve it up as a stew to Sheryl. (Masterchef, this isn’t). It’s another example of the show putting something on the screen that actively flies in the face of faith and perception and continues to divide the show’s followers as to its effect.

Speaking of Christine Lahti’s Sheryl, her ill-advised family interference continues (showing her grandchildren Kristen’s grocery-store punch and leading to Lexis being suspended) and there’s still clearly more to the ‘relationship’ with Leland. What we dismissed as outright hatred from her now seems to be almost a managerial power-game, like two workers vying for influence over each other… and maybe favour from something else.

There’s some movement on the David/Kristen front, though Kristen’s recent behaviour-shift leads to a husband and wife discussion with psychiatrist Kurt. Just as husband Andy agrees to work hard on their marriage and decides to return to Colorado to wind up the business so he can ultimately return home permanently (and ensure his convenient absence from the series again), Kristen clearly remains conflicted. She’s actively touchy-feely with David in what could possibly be dismissed as close-friend caring – surrrrre –  but is clear intimacy… especially in her casually-voiced wish that she wish David wasn’t about to become a priest. In his own efforts to get closer to God again, David himself has an apocalyptic vision that certainly includes getting very close to Kristen, so things are definitely heating up, even if it’s only mentally so far.

Still fun and intriguing, this ultimately feels a little like a less essential entry, certainly providing some food for thought and great moments but while more than a place-holder, it’s only edging the main thrust of the series forward in its B-story. 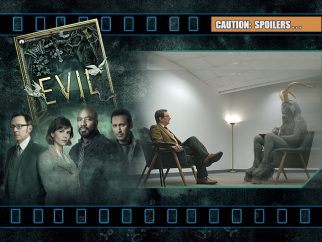 An animated Tomb Raider looks to get Carter…