'Leverage' was the caper escapism show that tipped the scales. Now an IMBd TV 'sequel' series brings the team back...

Nearly a decade ago, the Leverage team went their separate ways, still working together occasionally and pursuing their own ways to make the world a better place. But now, on the anniversary of losing one of their number to circumstances even they couldn’t stop, there’s an urge to shake off the cobwebs and do something a little dangerous, a little exciting, a little… illegal.

But in scoping out a possible outlet for that pick-me-up, Sophie, Eliot, Parker and Hardison realise that their intended target might already have been compromised by a man who seems to be planning something similar. But just who is Harry Wilson? He’s certainly not as good as the Leverage team, but they’re fascinated on his reasons for risking it all to take down his own boss. Perhaps this is just what the team need, one last job before their other priorities call them away again.

One more worthy cause… and who knows where that might lead? What could possibly go wrong?

During its original incarnation, I once described Leverage as ‘not pushing boundaries, but ticking all the right boxes’. It was meant wholly as a compliment to a show that walked the line between classic nostalgia and modern quirk. It was built to celebrate the downtrodden and gently eviscerate the high-flyers in an era where there were far too many real-life examples of both. It was, simply put, a show that usually left you with a smile, grift-wrapped in caper escapism.

Perhaps it’s not surprising, then, that the show is making a return. As even the characters themselves note, for all the good the original team did (and in-universe/off-camera, setting up similar teams around the world to help fight the good cause), the villains just upped their own game as well… often finding ways to not break the law, but merely to be powerful enough to ignore it and rewrite it in their favour. There would be few who would argue that the real world seems to have more influential, often-unaccountable opportunistic getting away with things, so the appeal of turning those tables and balancing the odds is an ever-appealing one, even if its a tv drama rather than the news. So the question isn’t, is it time for a Leverage return, but – sadly – when has it not been time?

At the end of the original run, Timothy Hutton’s Nathan Ford and Gina Bellman’s Sophie Devreaux decide to hang up their crime-fighting duties and forge a life together, with the rest of the team considering expanding their enterprise into new territories – Leverage: International, with multi-currency alternative revenue streams, as it were. We learn that’s exactly what happened, with Parker (Beth Reisgraf) and Hardison (Aldis Hodge) essentially overseeing other teams in far-flung places. However, the execution of the show’s main remit remains largely the same: find an arrogant white-collar villain, pinpoint the weak-point of their hubris and then humble them, often having something go askew and need to go to a Plan B to wrongfoot the villain and the audience.

With a sense of continuity, co-creators Chris Downey and John Rogers are back and familiar directors are on board including Jonathan Frakes,  Noah Wyle himself and also mainstay Dean Devlin. But there are some differences with Redemption.  We’re told that Ford, the man who brought them all together originally, died a year previously, possibly from a heart-attack, leaving Sophie quietly devastated and adrift. (In real life Timothy Hutton, who played Ford, has been facing serious off-screen allegations which may or may not have affected the bottom line on his inclusion). The team come back together to momentarily commemorate the date with the intention of all going their separate ways again, ships in the night held together but at arms length by strong friendship a loose anchor. However the urge to celebrate their ‘family’ with a one-off ‘job’ is too much, leading them to the Boston Museum. It’s here they stumble into the middle of a heist that has nothing to do with them, but is going to impact them significantly. Coming in to the show is Noah Wyle – familiar to audiences for his roles in ER and The Librarians franchise (the latter of which is another John Rogers collaboration and which also starred Christian Kane aka Leverage’s Eliot). Wyle essays newcomer Harry Wilson, a lawyer whose conscience finally catches up with him when he realises the extent of the arrogance and damage that his clients have loopholed their way out of – often with his help. But rather than a ‘leader’ he’s the newbie who wants to do the right thing and who the team decide to help ‘rehabilitate’, which creates a new and interesting dynamic.

Christian Kane is always engaging as Eliot, Beth Reisgraf retains the zany outlook of Parker, perhaps slightly tempered by experience (though she still loves her air-vents!) and Gina Bellman has that refined but dangerous demeanour down.  Aldis Hodge is in demand with other projects (such as Showtime‘s acclaimed City on a Hill) which means that Hardison will  now a ‘recurring’ character rather than in the show every week (the on-screen reason being that his altruistic enterprises need to take priority). However we’re introduced to his foster-sister Breanna Casey, played with immediate charm by Aleyse Shannon – a sassy but engaging character that will take over some of Hardison’s tech duties. It may be an answer to scheduling requirements, but it’s also an instant fit that should sit well with long-term fans.

The series has been based (and lensed) in various locations and while some of the more far-flung places on show this time are a feather in the hat of set-dressing and production-design, Leverage is making good use of some on-location filming in New Orleans, the group’s new base.  Plot-points aside, there’s also a welcome return of the show’s innate nerd credentials. By the end of the first eight episodes we’ve had overt references to Star Trek wardrobe routines and yet more entries in the growing list of name-dropping Doctor Who references that were such a delight to find in the previous run. (Hardison’s alias is ‘Alistair Lethbridge-Stewart’, Breanna’s is ‘Billie Potts’ ).

There are moments when it’s a bit uneven as a run and a few opportunities missed: the Hallowe’en-themed episode The Paranormal Hactivity Job is fun but just a little too silly and full of prat-falls and The Card Game Job initially seems like it’s sharpening its claws to darkly skewer the pharmaceutical business (giving us a thinly-veiled version of smug price-gouger Martin Shkreli) but then segues into a more genteel Ren-Fayre-based job involving collectibles. On the flipside, one could argue there are moments when it’s arguably too topical – the fourth episode has a housing-block collapse due to a cost-cutting exercise which might resonate a little too closely with the recent news from Florida.

Yes, it still remains wish-fulfilment rather than edgy drama and something of a safe harbour in a primetime of rougher seas, but that’s no bad thing…  Leverage  – in practice and in principle – endures.

All the first eight episodes of Leverage Redemption are available on IMDb TV with the remaining eight to be shown later in the year. 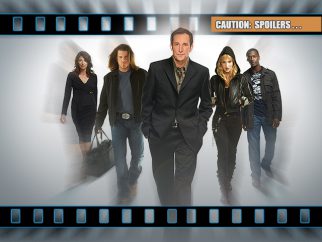