Loki and Sylvie have found the seeming power behind the throne and the real architect of the TVA. But his story of how things came to be  – and his seeming knowledge of the future – provokes very different reactions from his visitors.

Both would like to see him dead, but Loki – ever the pragmatist says they need time to digest the story told by ‘He Who Remains’. Would removing him actually cause even more chaos in the multiverse? Sylvie disagrees – her whole life was taken from her and she needs to punish the man who admits he was responsible.

As fateful, irreversible decisions are made, what will be the cost to Loki, Sylvie, the TVA and the entire multiverse?  (And can it be solved in one season?)

One wondered how Loki could possibly tie up its multichapter and multiversal story in anything like a neat bow with only 45 minutes left to do so. The answer is, like its protagonist, both bad and good. The ‘bad’ is that it couldn’t and we’re left somewhat hanging with a reality-altering climax that doesn’t offer many answers at all… the good is that as of today we now know it has a second season in which to do so. It shouldn’t be a surprise, but it is the first of Marvel‘s tv series on Disney+ to formally confirm a return.

One obvious aspect of all Marvel Studios‘ / Disney+ outings so far is that they often feel like connective tissue, simply there to fill a gap and ignite a tease, to most importantly, kickstart intrigue for what’s to come in ‘Phase 4‘. That’s doubly so of Loki which (disappointingly) has been far less an expected centre-stage masterclass for Hiddleston to dazzle in the spotlight (where was the potential passionate panache of a sky-punching SDCC appearance?) and more for he and the character to be chess-pieces moved around by the writers in service to a greater, often sprawling and abstract plot that extends beyond the television screen.

We already know that the Doctor Strange sequel will be dealing with a ‘Multiverse of Madness‘ when that film arrives in 2022 and Antman and the Wasp: Quantumania (set for a 2023 big-screen debut) will have Lovecraft Country‘s Jonathan Majors playing Kang, the time-travelling villain of the piece. Both of those outings seem relevant given that Majors is finally revealed in this week’s Loki as the power behind the TVA throne. He is never named as specifically as Kang, merely as ‘He Who Remains‘, though his casting and his alleged back-story (“I’ve been called a conquerer…“) seems to join a lot of quantum dots in formulating a backstory. He tells us that he was originally a scientist from the 31st century who proved the existence of the multiverse and how to access it, but that in doing so he discovered an infinite number of variants of himself who were also making the same conclusions. Most worked together for the betterment of all reality/realities, but some were less… altruistic and ‘He Who Remains‘ says it was only his pragmatic-if-cold pruning of all other realities that halted a cosmic, multi-dimensional collapse and war. ‘We’re all villains here…‘ he tells Loki and Sylvie, with some truth and acknowledging the faults found within his methods, but noting that his absence would only make this worse, creating a chaotic multiverse at war with itself.  He knows everything that has ever happened and ever will.. until now. Loki and Sylvie will either kill him or become benevolent dictators of the TVA. Needless to say that they disagree on that strategy.

The production values and visual effects are as strong as expected, even up to feature-film quality in some scenes – expansive nebulae, symbolic time-stream cosmic strings and even the castle itself. But that can’t disguise the fact that a good 75% of this finale is talking, banter and dialogue. The other 25% is solid combat – with Loki and Sylvie coming to blows with fists, kicks and sharp, pointy daggers. Though neither really wants to hurt the other, there’s a drive on both sides to prevent the other delaying (what they see as) the inevitable. Against the impressive backdrops, it makes good television.

There’s much to appreciate in Loki, but over-all, it feels like a story that, had it been a feature film, could have been told more effectively in around two hours or if it had been a full series (or at least twice the length) could have played its hand more slowly and seductively. Hiddleston is good, but simply hasn’t been given free reign to do what he does best and the result is abstract, weird, fun but ultimately – and ironically – a bit ‘safe’. The plot is wild, but the central character who should be steering the maelstrom, strangely becalmed, bewildered and bemused. Sophia Di Martino has held her own but her Sylvie remains a fractured, fragile survivor under a harder skin. Owen Wilson, Gugu Mbatha-Raw and Wunmi Mosaku have all done what the script required and hopefully will all be back for more.  As for Jonathan Majors’ introduction to the MCU, it all starts here and one expects will only get bigger…

Season One has been a tentative tinderbox where everyone’s running around looking for a match. Here’s hoping its second season is a variation on its theme and make his purpose finally burn more gloriously… 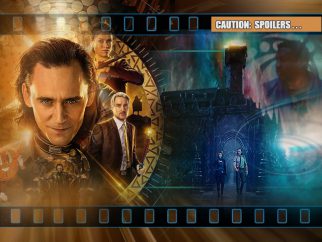