Hooked on classics: The latest Star Trek 'short' 'Calypso' has debuted and proves to be something moving and magical...

A life-pod drifts through turbulent space and after many months is picked up by a much larger craft: the USS Discovery. But the sole occupant of the pod finds himself in a sick-bay with no-one else around. Eventually a voice tells him his location and begins to supply his basic needs. Though it’s not his real name, the arrival identifies himself as ‘Craft’ and the voice claims the name ‘Zora’.  But it soon becomes clear that there’s no-one else aboard the ship and that it’s been that way for a while.

Where did Craft come from, what has happened to the crew of the Discovery and will the two strangers manage to find a connection that will sustain them and allow them to make fateful choices about their needs and commitments to each other and those lost to them?

Television appears to have come along way when it comes to what may once have been called ‘bonus content’. While DVDs have sometimes contained extra elements or deleted scenes and the internet gave online material that supplemented the main shows, it is now getting harder to distinguish between the mainstream title itself and some of the additions. When it was announced that Star Trek: Discovery would be getting some ‘shorts’ in the run up to its second season (starting in January), many might have thought they would be nothing more than rather inconsequential placeholders. After all, none of them would run more than around fifteen-to-twenty minutes and the plan was to focus on a small cast of two or three performers in each segment with stories that took place in the Trek universe but which weren’t beholden to current storylines or massive arcs.

Runaway, which aired last month was fine. It gave Mary Wiseman’s Ensign Tilly a nice and deserved showcase and never felt as cheap or throwaway as it could have done. That being said it equally didn’t have the feel of anything special.

So, it’s wonderful to watch something like the second Trek short, Calypso, and note that in the right hands, a short story can glide past any practical limitations and spin a truly magical experience.  Inspired, but not a slave to, the story of Homer’s Odyssey and Odysseus, specifically his time held alone on an island by a lonely water-nymph, it’s a brief and bittersweet story that defies its restraints and takes a long hard, beautiful look at commitment – of both the military and the emotional kind – and the elements that both divide and bring people together across the miles. Cultural touchstones sometimes age badly. Something that feels vibrant and relevant can wither like a mullet when viewed from a little distance off, but it’s hard not to warm to the appearance of Betty Boop, Fred Astaire and Audrey Hepburn as fairly safe bets and sips of beautifully-aged vintage wine rather than cheese.

Aldis Hodge – an often under-appreciated actor who most will know from his time on Leverage and TURN – shows his worth in every department and excels. Whether it’s a close-up on his troubled face or a pull-back to show his dancing chops, Calypso‘s short running-time still gives him plenty of space to stretch and work his significant stage presence. Anabelle Wallis as Zora also deserves high praise for what is largely a voice-performance for a majority of the running time, bringing a range of qualities  – a sense of fun, mischief, regret and loneliness to a fluctuating graphic – that would likely give Alexa some sleepless nights.

The camera-work is a strong addition to the tone as well. Some nice visual effects to tie in with the ‘Funny Face‘ elements aside, the use of the camera, particularly in the opening minutes as Craft finds his feet and gets orientated to his new surroundings works very well. In a lesser episode, the perspective shifts and camera tricks might have been there to hide deficiencies in a script, but here, they simply add to the experience.

Star Trek: Discovery has had its moments to date, though its first season felt like it was being pulled one way then another as it struggled to find a throughline and an identity beyond its franchise legacy commitments. This Calypso short, on the other hand, echoes some of the classic Next Generation episodes (The Inner Light, Relics, Yesterday’s Enterprise) or Deep Space Nine‘s The Visitor, tales that stood tall as standalones, held together by great ideas and small but powerful moments and performances.  It would not be wrong or unfair to say that with Calypso, Pulitzer Prixe-winning author Michael Chabon has set a high benchmark for others to emulate and raises hopes that the Captain Picard series he is working on can also be something quite special. 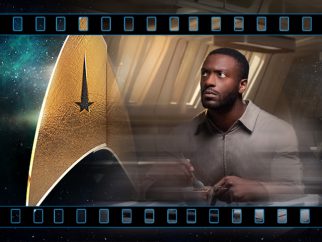