Kitty O'Neil, one of the industry's most revered and ground-breaking stunt-people has died at the age of 72...

Even the most capable Amazonian warrior may need the odd bit of assistance and for many years that came in the form of Lynda Carter’s stunt-woman Kitty O’Neil.

Born in 1946, O’Neil proved to have an inspirational life on a variety of levels. At only five months old a bout of measles, mumps and smallpox caused her to lose her hearing, her life being saved by her mother who put her in a bath of ice to calm the fever in the short-term. Thanks to her own will-power and the determination of her mother, Kitty learned to read lips and play the piano and cello at an early age, using vibrations to ‘hear’. As an adult she pursued sports, becoming an accomplished, award-winning  diver. At one point she looked a certainty to represent the US at the 1964 Olympics in Tokyo but she  suffered a broken wrist and contracted spinal meningitis which derailed her training. Also facing and beating two outbreaks of cancer in her twenties, O’Neil was determined to live life to the full and fought back to health to pursue as many activities and sports as she could master.  In 1976 she was the first woman to be employed by Stunts Unlimited. 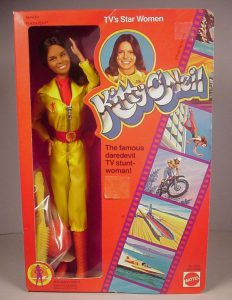 As well as being Carter’s double in Wonder Woman (from 1975 to 1979) for which she set the women’s high-fall record when leaping from the Hilton Hotel balcony to an air-bag 127ft below and would later break it again jumping from a helicopter to a air-bag 180ft below, she also performed in 120 other on-screen productions including another iconic female-led action series The Bionic Woman television (from 1976 to 1978) and the cop show Baretta and films such as Airport (1977), The Blues Brothers (1980), Smokey and the Bandit II and Damien: The Omen II.

She was so successful that Mattel created a doll for her and in 1979 she was the subject of a television movie herself with award-winning Stockard Channing taking the lead in Silent Victory: The Kitty O’Neil Story – though O’Neil noted there were a lot of liberties taken with the story. In 1982, she formally retired from stunt work  and citing the loss of several friends and colleagues in the business as a factor in making her decision. She also stepped away from another pursuit, land and water racing for which she set the women’s water-speed record of 275 mph in 1977 – which still stands to this day. However, she remained active and said in a 2015 interview that: “…I’m not afraid of anything. Just do it. It’s good when you finish, (you know) you made it.”

O’Neil passed away in South Dakota after suffering a bout of pneumonia.