As the team seek their wings, Leland Townsend finds that his plans of torment aren't going quite to plan...

The church asks David, Kristen and Ben to look into a parishioner’s concerns that her husband has become possessed. The further wrinkle is that Ashley (Joniece Abbott-Pratt) claims Raymond (Brandon J. Dirden) is possessed by… the Archangel Michael. On further investigation it appears that Raymond is being told to do altruistic things, but is it at the expense of his family. When David begins to see similar visions of a  ‘Michael’, it’s clear the original medical diagnosis could be wrong… and the implications more serious.

As the team prepare for Leland Townsend’s requested exorcism, he continues to play mind-games with them. But as he reveals his true feelings to Sheryl, she proves more than capable of handling herself…

Though each week brings a similar mix of the sacred and the profane, Evil continues to be the kind of show that’s hard to pigeon-hole. There’s nothing quite like it on the schedules – a rich mix of theology that never pulls a punchline and doesn’t take any prisoners.

Katja Herbers impresses in the way that she and the show give Kristen an edge, even as a ‘disbeliever’ of sorts. We now know for sure, even if we don’t know all the details, that she’s definitely committed murder and though it appeared to trouble her very little last week, there’s a few cracks showing in her demeanor this time around. It’s not that she regrets protecting her family, but she is obviously looking for further ways to justify her feeling that lack of remorse. It’s also clear that the investigation into the circumstances of Orson LeRoux’s death isn’t going away any time soon.

Furthering an earlier discussion about the nature of angels  – Kristen notes that if you read Bibical accounts they’re far more savage and dangerous than the delicate-winged cherubs on Christmas cards  -David shares his own visions of  Archangel Michael , more like a cross between an alien and a bird-of-prey.  Raymond’s visions might have been put down to a chemical imbalance, but not so David’s. The idea that ‘Michael’ is asking Raymond to do things that appear generous and kind but will ruin his family, raises serious questions for the trainee priest and the visions unsettle him even further. Could they have something to do with predictions of a deadly Biblical plague?

Michael Emmerson is one of the great screen villains. Though he was also excellent in a more heroic capacity in one of my favourite series, Person of Interest, he’s far better known for more duplicitous parts, most famously ‘Ben’ in LOST.  For Evil he’s just so deliciously twisted that half of you is wanting him to get his comeuppance as soon as possible and yet you are also willing the next scene with him to arrive as soon as possible.  This latest episode has him in fine full-bastard form. Far sooner than the audience might have expected (again, this is a show that zags when you expect it to zig), Leland reveals to his betrothed, Sheryl (a quite superb Christine Lahti as Kristen’s mother) that his love for her is totally fake and simply a means to antagonise Kristen herself. He makes this ‘confession’ as brutally as possible, with even the audience wincing at his casual venom. But the marvelous aspect of the scene is Lahti’s reaction – showing a character hurt to her core but far from felled… and by the time the episode ends, she’s given as good as she’s gotten, savage in her responses (though Leland seems amused by her painting “die you stupid pig bastard” on his office wall) noting “Do you know how many demons I dated before you?“. Wonderfully, the stature of the show means  – as is so often the case here – we don’t know if she’s talking literally or metaphorically… and not sure whether the answer would change anything.

The appearance of a new character, Sister Andrea (Andrea Martin) is also a quiet delight. In what might nominally be perceived as a small part with a few knowing lines, the character quickly engages – taking an instant dislike to Leyland and becoming a source of sage advice for the troubled David. There’s absolutely no doubt that there’s going to be development there and more of her to come – perhaps even becoming a kind of heavenly counterpoint to Leland’s diabolical ways.

There’s serious consideration given to altruism, deceit, atonement and punishment – all with some wry smiles and punch-the-face/sky one-liners.

As always, a clever guilty pleasure… 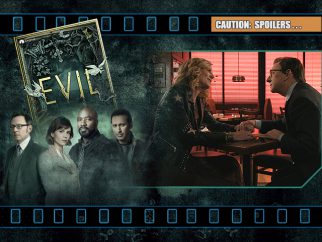