Pay close attention to the woman behind the curtain as the Lokis fight for their lives...

As Loki accepts he/she/they might be about to die on Lamentis 1, the innate entente cordiale between them seems to trigger a Nexus event allowing the frustrated TVA to finally locate them… but they are out of the frying moon, into the ire as they are once again in custody at the TVA base and under the watchful eye of Ravonna Renslayer (Gugu Mbatha-Raw)

Loki attempts to tell Mobius about Sylvie’s revelation that all the TVA workers are actually variants themselves, but Mobius is understandably skeptical that this is another ruse.  But what if it isn’t?  Mobius isn’t the only TVA operative beginning to have doubts about what they are being told and when HunterB-15  (Lovecraft Country‘s Wunmi Mosaku ) also acts on it, demanding answers from Sylvie, it sets the stage for a climactic confrontation in front of the Time Keepers.

It’s all a matter of life and death, but perhaps our Loki isn’t the only one prepared to stab someone in the back to survive?

Though last week’s episode was almost devoid of the Time Variance Authority, a majority of the action takes place at the TVA after our two Lokis are scooped up just in the nick of time and seconds before Lamentis 1 succumbs to its crashing moonageddon.  (In what feels very much like a Doctor Who scene, but on a better budget). Given that Sylvie claims that her enchanting powers only work on manipulating real memories (which means all the TVA agents are variants with past lives, though they aren’t aware of it), it was only a matter of time before ‘our’ Loki spills those beans to Mobius. Understandably, Mobius initially believes none of it – seeing it as a vain trick from the ‘God of Mischief’ and so happily locking Loki in a Lucifer/Hell-like time-loop where he consistently gets Sif’s knee in his Asgardian crown jewels. (It’s good to see Jaimie Alexander back as Lady Sif, even if it’s a brief appearance but it’s interesting that while every other character is in the credits, she doesn’t get a mention). But Mobius’ suspicions are piqued when boss Ravonna Renslayer (Gugu Mbatha-Raw) clearly lies to him about the death of another TVA agent and he learns her real fate. Sadly, he doesn’t get much time to act on the information when his own behaviour comes under scrutiny by Renslayer and is suddenly ‘pruned’ into oblivion. Wait – Owen Wilson, a major film star still delightfully essaying the laid-back, by-the-book only-good-guy-in-the-TVA, killed off? Hmmmm.

Sophia Di Martino is holding her own in the series (though I occasionally wonder what Killing Eve‘s Jodie Comer might have done with the role) and keeping things interesting.  We get to see a little more of Sylvie’s backstory and two things are made clear: from a very early age she was fast on her feet and – secondly – that her anger and defiance of the TVA are well-placed given the fate they had intended for her. The scenes that Di Martino shares with Hiddleston – both the hard-talking and the fight-sequences – are well crafted and it’s easy to buy that their characters are both cut from the same genetic cloth.

After much referencing, the Time Keepers make their first actual appearance this week – or do they – and there’s something deliberately hokey about them from the very start… which it turns out is just that, deliberate. The ‘throne room’ scene, complete with multiple ‘sword’ fights and hand-to-hand combat feels like a mashed-up homage to The Wizard of Oz and The Last Jedi – presented well-enough and executed with some good choreography, but the discovery that the said keepers of time are just artificial constructs doesn’t come as a huge surprise or plot-pivot. But another surprising ‘death’ does – no less than our own beloved series Loki – and might wrong-foot the audience. Would the show really pull the plug on Hiddleston, their main attraction? Yes, there’s certainly an whole lotta alt-Lokis going on this week who could step up – apart from the series Loki, there’s Sylvie the Loki Variant, Young Sylvie (essayed by Cailey Fleming aka Judith Grimes of The Walking Dead) and – if you stay around through the credits (and what discerning fanboy doesn’t when it’s a Marvel project?)  the quotient goes even higher with several more variations on a theme and, technically, the debut of none other than Richard E. Grant as a ‘classic’ and… wait… an Alligator Loki???  You don’t have to have a brain the size of Asgard to think that  having TWO major deaths (especially the key ‘names’ of the production) might just be a tad too much to trust and ultimately think it’s a sleight of hand. So, to some extent, that multi-Loki mid-scene credit should stop you fretting for the next week.

Again, the Marvel / Disney+ series are good in concept and strong in actor delivery with decent direction throughout, but the pacing remains off (the first two episodes could easily have been one) and often with far too much going on to pay everything off, so stuff does gets dropped.  The second episode ended with Sylvie activating multiple off-shoot time-lines that seemed like a ‘Crisis’ (see what I did there?) beyond anything the TVA had had to deal with – but taking the events of this episode… and that is barely mentioned or referenced – indeed, Renslayer seems positively calm by comparison when she has the Lokis under lock and key.  The young Sylvie/Loki flashback is good, but – again – there’s very little detail on why she was removed to begin with – and these details are the connective tissue that matter. Though it’s not the case, it often feels like Marvel come up with a good story to tell but only find out how many episodes they’ve got to tell it after they’ve started, thus affecting the nature of its telling – sometimes quick and punchy, sometimes feast or famine with the details as time permits.  There’s certainly more to come, all packed into the last two episodes. Not only must this multiverse mess be sorted (or at least set things up for the forthcoming Doctor Strange movie), but sharp-eyed fans of the mid-season trailer will have glimpsed the USS Eldridge (re: The Philadelphia Experiment) in ‘drydock’ which must play a part, even if it’s just a cute /acute historical reference. 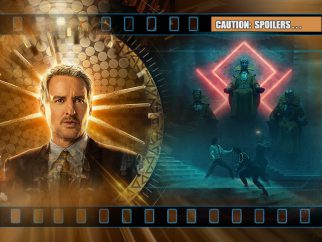