In 'Family is Freedom', the season draws to a close with some home truths for pursuer and pursued...

As the ViCAP team realise the full implications of the River Murders and their connection to Alastor, it becomes a race against time to find Clarice. But Starling has already been taken by Tyler and her only hope of survival is in  holding out until her colleagues arrive.

Understanding Tyler’s complicity in events and knowing all too well how a father’s legacy can shape their children’s lives, will Clarice be able to find common ground with him or have things already gone too far?

And so we reach the season – and, sadly, most likely series – finale of Clarice.

The show has had a distinct Criminal Minds: 1990s vibe throughout and for the most part it has often been the subtle touches to production design that have populated the offices rather than overt ‘Look at me!‘ props that have sold what is now a ‘period’ piece (shocking for those of us who lived through it).

Clarice certainly hasn’t been perfect. The irregular scheduling with huge gaps between episodes, Kal Penn’s notable absence mid-season, the overt ‘don’t-mention-his-name’ scenes, a few too many plots to track and to do justice and Clarice’s shallow learning curve on personal safety certainly didn’t help things. That being said there was a considerable counterbalance with the quality of the ensemble performances (lead by Australian Rebecca Breeds capturing excellent cadence in the title role), consistently strong direction and an under-appreciated ability to highlight the dated attitudes of the era with modern sensibilities, but without compromising either. In particular the transexual story-arc with Jen Richards as Julia Lawson could easily have been a well-intentioned but manhandled disaster and instead walked the line pretty well, avoiding and amending dated tropes.

Specifically, this episode had to round-out a lot of the series’ beats and there were quite a few to deal with.

The through-line from the River Murders at the start of the season to the nefarious, creepy and generally ‘ewwwwww’ embryonic  predilections revealed to be at the heart of the  Alastor company. Nils Hagen (played by Peter McRobbie) is a genuinely creepy, malevolent individual, but also the kind you often find skulking and posturing like a mature-audience version of the Scooby Doo villain in  a range of creepy psychological thrillers. Or perhaps a Mr. Burns by way of a John Connolly novel. His late introduction as the main threat of the piece (rather than Raoul Bhanej’s obtuse lawyer Joe Hudlin) speaks as much to a shift in tone as it does misdirection and it’s a pity that Hudlin was essentially wiped out with the stroke of a pen when a more fitting denouement could have been more satisfying. There was an attempt at misdirection regarding Hagen’s son Tyson (Douglas Smith) but in the end he’s essentially a weak, tragic figure, complicit and ruined long before we ever met him. Both Tyler and Clarice face moments of epiphany when it comes to how far their fathers screwed them up and left them traumatised. It’s unusual, but overtly more honest, that Clarice doesn’t dissuade Tyler from ultimately killing himself, aware of the sheer volume of weight of his collusion with his father is something he’d always have trouble emerging from. He asks if she’d really ‘seen’ him the way he’d seen her and the unforgiving ‘Not until now‘ is fairly brutal. In most shows, the hero would have had sympathy for such an individual or done ‘the right thing’ in talking him down, but here Clarice – as an individual more than an agent – has clearly had enough of people not being accountable for their actions and disappointing her. She’s recovered from her traumas, but she’s far more cynical in their aftermath.

It looks for a moment as if we’re going to lose Michael Cudlitz’s Krendler, felled by a bullet during the siege and insisting that the team continue on to save Starling, though thankfully the irascible team leader makes it through surgery, well enough to say he will accept Clarice back on to the ViCAP team but only if she takes some mandatory time off and treats it accordingly.

The other members of the supporting cast also have their moments. Lucca De Oliveira’s Esquivel steps over an important professional and personal line to obtain enough information to track Starling down to where she’s been held captive. There’s subtle call-backs to the character’s personal familial loss in the way that Nick Sandow’s Clarke cares for the fleeing young women from the Alastor compound. Kal Penn’s Tripathi continues to show his knowledge of art history by explaining the memento mori portraiture. The Martins – Jayne Atkinson as Ruth and Marnee Carpenter as Catherine – each have key scenes in which it shows they’ve learned hard truths and have become better people as they make it out the other side.

At the time of writing this, Clarice’s fate is not official, though it now seems unlikely we’ll see a second run. That means that we probably won’t see Devyn A. Tyler/Ardelia Mapp’s continued struggles within the systemic racism of the era’s FBI (we leave with her job in jeopardy though with the respect of her colleagues) or understand quite how Clarice’s flashback-to-childhood dangers and her cowardly father actually played out in the short-term. But as the older Clarice heads home along country roads, to the place she finally belongs in West Virginia (to a haunting rendition of that John Denver classic), there’s an ending of sorts and if there’s no more, then Clarice the show like Clarice the character may finally have emerged from long, dark shadows and ready, if called, to fulfil that potential. 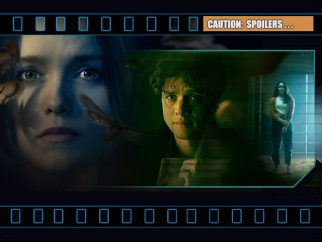 ‘Supernatural’ gets Winchester prequel. But are brothers grim?