In the penultimate episode, the team make their case, but is the crime even worse than they thought?

Despite threats from powerful people, the ViCAP team finally have enough evidence to raid Alastor Pharmaceuticals. But Hagen and Hudlin seem ready for the raid and the team will have to dig a lot deeper if they want to understand the guilty party’s true motivations. As tracks are covered and scapegoats punished, it appears time is running out to close the case.

It doesn’t help when, under pressure from both the River Murders case and her own stirring memories about past traumas, Clarice finds herself striking out, verbally and physically and in a way that may have personal and professional consequences.

But even as the team finally piece together the extent of the true atrocities and those really responsible, Clarice – now without a gun or badge – may be in more danger than she realises…

We’re in the endgame of Clarice and with chances of a second season suddenly fading, there’s a lot in the mix that needs to get tied together. One of the strengths of the show is its procedural aspects and that’s helping as we hit the penultimate episode Father Time. There’s also been a balance with the faults and foibles of the ViCAP team – none of them without issues of some kind and in an era where procedures and politics were hardly as enlightened as we hope they are today. Once again, the episode shows good police-work and bad attitudes – both the clash between competing departments, the pressure of politicians and the toll on those on the front-line.

The script makes a disposable member of Herman’s team so overtly racist and sexist (even for the 1990s) that it’s no wonder that it ends up with Clarice slugging him and though we can blame it on Starling struggling with repressed memories and feeling under pressure, there’s probably not a regular character in the room that wouldn’t have been tempted to do the same. But it is a moment that’s been coming all series: Clarice needing to be in control all of the time but her past traumas informing every move to the point of fracture. It’s now more than clear that Starling’s father was far from the saint she’s pictured him as all her life and that he made her do things which compromised him – and possibly her (we’ll likely get the specifics in the finale next week). Clarice’s ability to profile everyone but herself is also shown in her confrontation with her psychiatrist  Dr. Renee Li (Grace Lynn Kung). When Li pushes at Starling to finally admit to and face her anger, Starling fairly accurately pushes all of Li’s own buttons, pointing out physical and mental traumas her doctor has likely faced (severe burns, moving to a new city).  It’s either a major development between the two in their profiling techniques or a final session, depending on how you see it).

And Starling essentially quits the department, thanking Michael Cudlitz’s Krendler for his support but saying that the job is killing her. It’s hard to argue against her – she brings a unique insight to the team and they’d be less effective without her, but as things stand, she’s also a liability to herself and others.  It looks as if events in the finale may upturn that decision (one suspects Krendler is filing any immediate paperwork), but there’s a solid and growing argument that Clarice should be nowhere near the ViCAP offices for quite some time. However, it is good to see the likes of Krendler, Attorney General Ruth Martin (Jayne Atkinson) and Catherine Martin (Marnee Carpenter) not giving in to the pressures and attention they are obviously about to face themselves.

All the team raise their game, proving this is an ensemble show. Kal Penn is making up for lost time since his return, with his Agent Shaan Tripathi being something of an art expert and that scrutiny leads to the team discovering the kind of evidence that can solve their case and give a CSI team the cold sweats. It’s a pity we haven’t seen more of Tripathi/Penn and his absence has been felt during the mid-season episodes.

For most of the season, Joe Hudlin (Raoul Bhaneja) has been painted as the nefarious ‘big bad’ that the team need to take down – made all the more effective by Bhaneja’s excellent serpentine delivery. But the situation pivots when it becomes clear that Alastor’s actual CEO Nils Hagen (Peter McRobbie) is more depraved than anyone suspected (don’t even ask what lies beneath the paint-strokes of the canvas in his office) and that Hudlin is going to be their fall-guy – murdered at his home with a convenient suicide-note ‘confessing’ to all the crimes that ViCAP are investigating. Krendler, who spoke to Hudlin by telephone in the lawyer’s dying seconds (and that’s really the only blip in some otherwise effective ‘wetwork’) knows otherwise and though it hardly invokes sympathy for the blackmailer, the team redoubles their efforts to go after Hagen.

Without being smug – largely because I think the plot development was obvious – I totally called out Tyson (Douglas Smith) as a bad ‘un several weeks ago. Thrillers have a tendency to hide their biggest monsters in angelic faces and the whole ‘Alastor’ mythology and metaphor is about the son usurping the works of the father. That’s not good news for Clarice who looks to be in harm’s way at the end of Father Time.

Though, at time of writing, Clarice hasn’t been formally cancelled, the news that the original plans to move it to Paramount+ have suddenly fallen through and that no slot exists for it on the network’s remaining ’21/’22 schedule, means it’s likely next week’s closing chapter will act as a default series closer.

One can only hope that it will wrap things up in a satisfactory way and not simply fade back into silence. 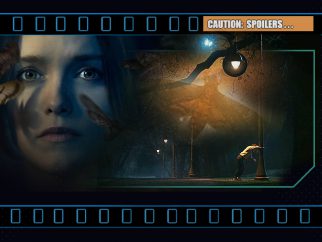