Michael Bryce (Ryan Reynolds) isn’t sleeping well. After managing to get the bane of his life, Darius Kincaid (Samuel L. Jackson), to the Hague to testify against a war criminal, he’s still found his ‘AAA’ license to work in the protection industry business thwarted at every turn and the resentment is starting to get to him.

His psychiatrist suggests a holiday – as far away from his old profession as he can get and though Bryce is initially reluctant, he eventually concedes that it might be a good idea. Unfortunately, it appears that Darius Kincaid has been kidnapped and now Darius’ wife Sonia (Salma Hayek) has tracked Bryce down and needs his help to free her husband.

Getting him back proves relatively easy. However, keeping him out of new trouble and a Europe-wide conspiracy is another matter entirely…

While no-one would confuse 2017’s The Hitman’s Bodyguard as anything close to Shakespeare, it was a decent enough action movie, a frenemy-road-trip of silly but engaging proportions and with two major names propelling it along with testy testosterone. The movie-industry logic must be that if you get everyone to come back, up the stakes and make Salma Hayek an equal partner in proceedings, you’ll be guaranteed to have a hit.

Unfortunately Hitman’s Wife’s Bodyguard proves to be nothing but an opportunistic sequel, the laziness of its script and direction only matched by its desire to be a sub-James Bond outing at odds with the sheer lethargy it must have taken to even miss the ‘The…‘ from its title ( a moniker that you’re almost guaranteed to misquote, regardless)…

Good action movies frequently push the laws of physics,  Hitman’s Wife’s Bodyguard pushes the established laws of Looney Tunes. The original’s set-pieces were extravagant and sometimes silly (with chases in the streets, on rooftops and canals) but the sequel’s commit a greater crime: they are simply boring – sure, grand enough in scale but with so much repetition and unoriginal, quick-cut camera-work that it feels like they were created by point-and-shoot cameras, rather than any directional skill. That’s a surprise as Patrick Hughes is back to helm it all, but showing no memory of his efforts from five years previous.

Familiarity quickly breeds contempt and it generates absolutely no investment as day-player bodies go flying hither and yon in a blur. Though many of the key personnel are returning, it feels as if all involved with the creation of this film had merely had the original film described to them, rather than watched it.  In fact, it’s incredible how much is ignored or discarded for the new entry. In The Hitman’s Bodyguard, Bryce was a more-than-capable protection agent who just happened to be saddled with the guy who’d ruined his perfect-record.  The just-tolerant relationship created in the first film, where Reynolds’ Bryce even takes a bullet for Jackson in the climax, has evaporated – that whole thing played as a cynical joke about everyone thinking Bryce’s career is also a joke. Here Bryce is single again (the previous love-story arc with Elodie Yung apparently AWOL and surplus to requirements?) and he’s a whiner trying to get in touch with his inner feelings, determined to take a sabbatical and swearing-off gunplay. He’s now even a disappointment to his own father, Morgan Freeman. Yes, Morgan Freeman. Even Jackson has the respect to see that singular stunt-casting joke for the lack of hilarity it produces.

While it’s admirable that Salma Hayek is proving that passing 50 is rightly no obstacle to being sexy (and is currently undergoing a welcome career-resurgence that will include Marvel‘s Eternals) her Sonia Kincaid is largely a one-note character and struggles to even achieve that singular dimension. In the first outing she was fun but little more than a punchline and a cameo and – unfortunately – it feels like someone has stretched those brief scenes out to 90 minutes, landing her centre-stage but without really expanding the material or character to match. Yes, Samuel L. Jackson has made a career out of foul-mouthed hard men, but there’s usually more to him that profanity and volatile punctuation, even when delivered well. Hayek’s Sonia merely shouts obscenities and shoots people and, well, that’s it… there’s nothing else to say about Sonia.

Reynolds own career, perhaps personified by the likes of Deadpool, has been built on sardonic asides and irony-aware characters and has thankfully managed to be self-deprecating in the process – but a few quips about Kincaid’s collateral damage tendencies and Sonia’s suitability to have an maternal aspirations aside (“Your mouth needs an exorcism…” being one of the highlights), there’s also nothing of note here to add to that résumé. Reynolds plays Bryce as conflicted, but consistently looks like he’s woken up on set and is trying to work out the best way to exit. It gives me no pleasure to go for the jugular and say that his performance in Green Lantern had more to recommend it.  As for Jackson, he also seems to sleepwalk through a part he originally made fun, but is now is just annoying. He laughs, sneers and shoots – but there’s nothing likeable any more.

Banderas, who has the dramatic and comedic chops for almost any role he gets his hands upon, has clearly been told to take his character, a flamboyant, corrupt Greek shipping magnate as a joke – which he does. Named Aristotle Papadopolous (because, again, the film isn’t wasting its budget on nuance or originality), Banderas is largely required to snarl, bitch and prance around with a plan that is something to do with getting diamond-tipped drill bits so that he can drill into secret ‘power-boxes’ scattered around Europe that can bring the countries to their knees. If that’s not convoluted enough you also have side-story-arcs about rival protection agents and clumsy. Another major disappointment is to see Frank Grillo wasted. With a growing reputation as a gritty screen tough-guy with genuine hand-to-hand combat credentials , his compromised Europol agent (desperately wanting a return-ticket back to his native Boston) gets virtually nothing to do but look annoyed and shake his head in frustration – not unlike some of the audience. Richard E. Grant also makes a brief appearance, but it seems like a favour rather than a job.

With one hand flipping the bird and both feet jammed on the accelerator, the film is an utter mess: rapid-fire punches and rapid-fire punchlines refuse to take prisoners or seem to care much about their bruising effects, so, really, why should we? Not bad enough to be good, not clever enough to be a pastiche, not stylish enough to be anything other than derivative… yet bland enough to be frustrating Hitman’s Wife’s Bodyguard has very little to offer other than the fading echoes of its original casting and even fans of that original will likely feel that’s not nearly enough to recommend it… 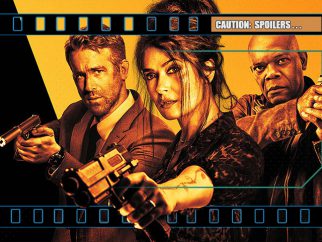