Nevers - More or Less: Joss Whedon's latest is fantastical but familiar, but a little late to the party...

It’s 1896… and something is in the air, especially over London. Though people will later argue over what they saw, didn’t see or felt, it seems to be the origin point for a select minority, mostly women, to find that they have suddenly acquired strange new abilities. Three years on and for some it seems like a blessing, for others a curse. Many do not see it as either, simply something for which they don’t want to be despised or hated.

Amalia True – who can see a little way into the future – has helped protect some of the other ‘touched’ people and is bringing then together for their own protection and to perhaps create a force to be reckoned with. Others, like Lord Massen bristle at the thought of the ‘natural’ order being over-turned. Elsewhere, even as a manic killer named Maladie stalks the dark alleys, others draw their own plans for power or chaos.

Because, in the wake of these blessings or curses, something has come to London and amongst the death, life, beauty and squalor, many of the Touched will have to pick sides that will decide their fate and that of the planet…

There are a lot of eyes on new series The Nevers for a variety of reasons.   One of those reasons is creator Joss Whedon and – undeniably and unavoidably – that’s both a pro and a con, even before you’ve seen a single frame. Whedon was, of course, a pop-cultural, generational wunderkind, ushering in a new wave ensemble shows that spoke to female empowerment and disenfranchised youth. Even decades later, the likes of Buffy the Vampire Slayer, Angel and Firefly remain pop cultural landmarks. Then there were the first two Avengers movies, breaking box-office expectations and records. Everything he touched turned to ratings gold.

Recent years have been more…problematic. The Midas Touch is still in force, at least in the sense of click-bait and coverage, but there’s been something of a tarnish. His re-editing and restructuring of DC‘s Justice League (taking over from Zack Snyder) was universally panned and on a personal level a growing slate of actors came out to criticise his professionalism towards them on Justice League and other past productions. So when – in the middle of that ongoing maelstrom – he suddenly stepped away from The Nevers , his latest pet project and one almost seen through to completion, citing extreme exhaustion… well, even trying to be stoically impartial, it’s hard to wholly disentangle one aspect from the other.

Ahead of time, the general feeling was that The Nevers would be his Victorian Buffy and… yes, there’s some truth to that, though it feels far more like Whedon pivoting to a deliberately anachronistic, steam-punk-powered Victorian take on The X-Men (or, more accurately, X-Women). For instance, the idea of a group of ‘gifted’ individuals being given a sanctuary to come together and use their powers without fear and the wider notion of a nation’s powers-that-be trying to demonise or restrain outliers has been that comics’ cornerstone remit for decades. Antagonist Maladie and her own team of less-scrupulous team look like a ‘Brotherhood of Evil Mutants‘ variant;  look closely and squint a little and society lothario Hugo Swan’s (James Norton) appetites for flesh and influence and they seem very much like a version of the comic’s take on the (historically real) Hellfire Club.  Recent show The Irregulars (a series that started incredibly blandly but improved dramatically as it progressed) still felt like the kind of thing that might wither in The Nevers imminent shadow, but – frankly – that shadow isn’t as dark or as foreboding as you might have expected.  It’s fun, competent, stylish and clever, but it also follows in the wake of even more ambitious and better world-building fare such as Carnival Row or Penny Dreadful: City of Angels. There’s even some of Doctor Who‘s Pasternoster Gang in there somewhere too. That’s not to say it’s not good – it’s ambitious, well put-together and it’s clear that the budget is significantly higher. Whedon brings everything expected and there’s much here to appreciate, but it’s also true that The Nevers is far from setting some new yardstick or benchmark. It’s good, but a lyrical tune riffing on an already established theme and just a little late to the party.

The Nevers is populated with potentially interesting characters with even more interesting names, but it’s still hard to tell if there’s ones that we’ll come to love rather than like. Laura Donnelly as our troubled kick-ass precog Amalia True is one part Jean Grey, one part Mrs. Peel. She’s the heroine with a secret, but also a nice line in banter and a fearlessness to be reckoned with. Yes, we’ll root for her and her success but she’s yet to get our hearts racing. Ann Skelly’s Penance Adair  has the gift to perceive electrical currents but while the seemingly more ‘innocent’ of the group, she’s so far seeming more like a ‘Q’ side-kick, able to invent the incredible rather than an equal partner in proceedings. Maladie is the bat-shit crazy antagonist, a cross between Jack the Ripper, Typhoid Mary and Harley Quinn and played with scenery-chewing gusto by Amy Manson. Whether there’s method in her blood-letting shock-value rampage, only time will tell, though – hinting at a tragic back-story – she seems to be the only person so far that remembers how things started.  There’s able support from the likes of  Olivia Williams’ as Lavinia Bidlow –  their benefactor, Ben Chaplin as a compromised detective, Pip Torrens as self-righteous Lord Massen and an impressive Nick Frost as a deliciously dangerous ‘Beggar King’ that all swirl around and complicate matters.

There’s no denying that this mainly dynamic female cast (and a largely grey-haired, male and somber establishment looking on disapprovingly) has the sense of requisite empowerment you’d expect, but there’s also brief, needless if deliberate casual nudity along the way, which suggests a sense that this is a show that wants to have its cheesecake and eat it too. Somehow that ultimately falls somewhere between empowerment and lip-service.

The visual-effects are good, but it’s still occasionally possible to see the composite elements bringing old London Town to life or playing with scale – a ‘giant’ girl has just a little of the uncanny valley about it. It’s the more subtle elements that work best, the nods to fledgling technology emerging ahead of its time and the stylised devices that populate the smartly-lit background that actually delight more than the more bombastic moments. And, as with all Whedon’s endeavours, there’s signature witty banter and snark a’plenty, delivered with style by its confident cast. In a somewhat over-stuffed pilot, with so much to establish, one might suspect that the mystery of what gifted these abilities to select individuals might be an enduring part of the plot, but by end of the pilot episode we see what appears to be an alien ship flying low over the city, casting out almost pollen-like light particles and then disintegrating itself – and then all who have seen it (bar one) appearing to forget it ever happened. It leaves a lot of wiggle-room for nuance and context, but is perhaps more information than we’d expect to see by the end of the hour.

There’s certainly enough to keep existing Whedon-fans and lovers of fantastical Victoriana around for more in the short term, but the longer game might be more difficult to establish as a weekly investment in an already crowded market. Rather than essential, this feels… just ‘okay’, entertaining in the moment rather than profound in the memory: basically an expensive mixing pot of competing spices – one that wants to be adult enough to be able to swear and show breasts in an effort to prove its traditional risque credentials, but yet beat those same chests claiming it’s up-ending an apple-cart it’s already hired for purpose. It’s a checklist of existing, proven audience-friendly concepts weaved together, relying significantly on some aspects of genre-familiarity and with its best selling-point being that creator brand name that HBO also needs to keep at a certain distance.

That’s all fine… it’s still far superior to a lot of things out there. But it’s also Nevers an easy balance to maintain – six episodes in the weeks to come and a further six scheduled for somewhere down the line – and it will need to be a more cohesive sum of its familiar parts to truly be empowering…

In the US, The Nevers is shown on Sundays 11th April on HBO and will begin its British broadcast from Monday 17th May on SKY… 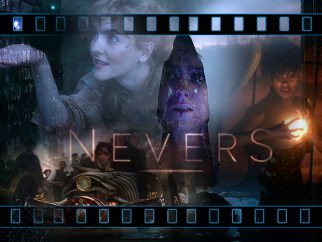