Debris' seventh episode, 'You Can Call Her Caroline', is all about manipulation - of its characters and its viewers...

When a man, Liam Packard, kills himself after being mentally-pressured into handing over a bag of Debris pieces, the event raises even more questions. Why does nobody remember the moments before the death and why doesn’t the person who took the debris have any answers?  The team head to Maine to talk to the dead man’s brother, Luke, and uncover the possibility that the family might have uncovered debris that fell into a nearby lake several weeks before.

But Liam’s daughter Caroline seems anxious for them to leave… and so they do.  It’s only when Jones and Beneventi have departed that they suddenly wonder why they never searched the lake or asked Luke and Caroline any more questions.

In some television episodes you can see where the plot is taking you even before you get there – the demands of primetime meaning there’s only so far you can step from the traditional template. So while the latest episode of Debris still works within those parameters, it also does a decent job of subverting some of your expectations as it makes its case.

The  pre-credits intro begins the mystery well, offering a scene involving the debris in which the outcome is gruesome but the reasoning and context is not yet apparent. Liam (Kynan Foster) kills himself under duress, but why? Did everyone around freeze at a key moment or did time stop? Who was being controlled and to what end? It’s not immediately obvious what we’ve just seen… but it keeps us hanging around to find out.

For a while, veteran genre fans might well feel they’ve stepped into The Twilight Zone, specifically the Bill Mumy classic episode It’s a Good Life where a rural farm-boy controls his quietly terrified family to satisfy his every juvenile whim. When the titular young girl of Debris‘ latest episode, Caroline (finally – an episode title with some overt relevance!) played by Evelyn Burke, makes her appearance, there’s something immediately ‘off’ and her subsequent actions lead Jones and Beneventi and us to believe she has an overt connection to the debris… until our heroes are made to forget. Yup, as an audience we think we’ve already called it – the spooky, murderous kid trope is alive and well and that’s fine because the acting is good and the story, though almost reverential to that black and white classic might still be good. Except… no – *SPOILERS* – we’ve got it all wrong. The perception manipulation at work is almost meta – it turns out Caroline is the one in peril and also the most brave of the bunch. She can attract the debris but isn’t controlling it. It’s her uncle Luke, suffering PTSD and seeing the debris as a way to take revenge on his old superiors, who is the one exerting control and she’s the one trying to distract and divert him and possibly save our agents in the long term.

It’s interesting that we’re been fed little bits about Bryan’s past and military service. We know that being a soldier and operative in a war zone took something of a toll on him and that yet, somehow, he’s been holding on to his better angels and humanity. The connection he makes with Luke Packard (Benjamin Hollingsworth) is a deeply personal and genuine one, both having dealt with the PTSD that comes with battlefield experience and the difficulties in finding any kind of peace thereafter. The moments where Bryan and Luke compare brief verbal notes – with much going unsaid – and then when Bryan extends his hand in friendship and sympathetic brotherhood… is where you find yourself actively willing Luke to accept it and yet it’s not to be.

Elsewhere Maddox (Norbert Leo Butz) is getting ready to further interrogate Anson Ash (Scroobius Pip). For primetime, the inferred ‘ewwwww‘ factor as cuts are made and electrodes are slipped inside his head is pretty close to the knuckle – or , in this case, the scalp. Rather than the old-fashioned shock-treatment torture we think we’re going to get, it looks as if the equally-painful process is actually there to bring up imagery from Ash’s memory. Maddox wants the whereabouts of George Jones and sees this as the best way to get the information at source and it’s undeniably effective. It also certainly goes a long way into changing our perceptions about just how clear the good-guys and bad-guys are. Ash and INFLUX may have been willing to blow up most of Manhattan, but the FBI and Maddox seem to have few qualms about their own grizzly and expedient methods. This is doubled-down upon when we also realise that Finola’s boss Ferris ( Anjali Jay) is applying pressure to her MI6 agent through Finola’s sister, Jules who manages to send a code-word confirming her coercion.

Quibbles? Minor ones. It’s never really explained why Caroline can attract the debris and the show thinks a geographical description that runs to ‘The church in Lancashire…‘ is somehow good enough to narrow it down to one place. (For American viewers, let’s say that’s about as precise as saying ‘The cornfield in Iowa…‘)

We leave with Finola facing a difficult choice… go to her sister or join Bryan who says the FBI have found her father… and we still don’t know all the facts about Bryan’s medical results or Maddox’s son, which will surely start to come further into play soon.

As we noted last week, the Trust No-One factor is out in force and building… 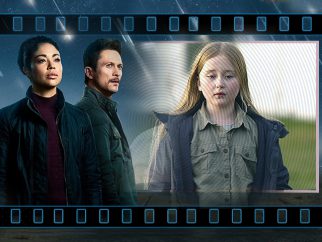