"The Whole World Is Watching..." as Steve Rogers' successor crosses a dangerous line...

It seems that everyone either wants the remaining Super Soldier Serum or wants it destroyed – and either way they’ll go to desperate lengths to achieve their aim. Sam understands Karli Morgenthau’s frustration and  revolutionary agenda but wants to talk her down and show her that violence is not the way to achieve it. However,  both John Walker and Zemo have their own more direct solution to the problem.

With Wakanda sending its Dora Milaje warriors to bring in Zemo, it seems everyone is bound to collide, but who will cross the line first, what will the consequences be… and who will be watching?

Though marketed as spy-fi actioner, in many ways The Falcon and the Winter Soldier is more a deconstruction of the MCU, a look at the collateral damage – physical and emotional – that happens just off the movie-screen and after the heroes have usually left the scene… and it doesn’t paint a pretty picture. Arguably an ever-more cynical show by the episode – almost all its characters are compromised in some way, even if they have good intentions. This week alone there’s a lot to digest, with plenty of slugfests but almost every also character making valid and astute (sometimes subtle, sometimes not) observations on their lot in life.

Those familiar with some of the source material’s stories will have likely worked out in advance where the story was generally going, though John Walker’s descent is no less effective for it. But the writing and direction is careful not to fully demonise Walker. We (as well as Bucky and Sam)  already know he’s no real substitute for Steve Rogers and there’s been glimpses of the underlying cracks beneath the award-winning military service history. But there was also the feeling that Walker wasn’t a bad man, simply a man literally promoted beyond his capacity and thus continuing to make a escalating series of bad decisions in an effort to be something he’s not. Walker’s eventual duplicity in stealing the last of the super-soldier serum and taking it is based on a genuine desire to be a more effective soldier against his perceived enemies and the final horrific action he takes is through the clouded fury he experiences immediately after the death of his partner – the serum boosting his physical capacity and the damage he can do. He can rationalise each step on the road to Hell if cast in a certain light, even if not forgivable and possibly now irredeemable. The one thing we can agree on is that Wyatt Russell does a fantastic job as a man who isn’t.

Erin Kellyman’s Karli Morgenthau, erstwhile leader of the Flag-Smashers is arguably just as compromised but even more nuanced. She’s someone with a genuine, absolutely fair and timely grievance and during her speech to Sam, it’s hard not to fully side with her point-of-view, if not her methods. In a time of fluid, tinderbox’d borders and refugees caught up in political and economic policies that have little to do with basic human needs of the people they affect, her words resonate. Then again, she’s also set off explosions that she knows will kill people and though her killing of Clé Bennett’s Lemar Hoskins / Battlestar is not intended, it’s her negligent and reckless actions that directly cause it, to the point of a murder or manslaughter charge at least. (Bennett’s scene earlier in proceedings, where Walker is asked for his autograph but ‘side-kick’ Hoskins is not speaks to a hierarchy played as a joke, but which has some deeper meanings in the wake of what happens…)

Zemo is resolute in his desire to see all the super-soldier serum samples destroyed by any means possible, arguing that anyone who takes them must be at least buying into a ‘supremacy’ angle and is therefore potentially dangerous, a point-of-view that Sam ironically offers when talking with Morgenthau about morality. But there are also echoes of the speech that Erskine had with a pre-serum’d Steve Rogers back in the first Captain America film, about why someone would even want to receive it.  Like alcohol, the results – good or bad – are often not a change in behaviour but an exaggeration of pre-existing traits and permission to use them. That’s what makes Steve Rogers a valiant Avenger and what makes John Walker a traumatised revenger.

There’s so many people with different agendas here that it’s hard to keep up, but one key action sequence throws all the pieces together in a moment that has action, emotional resonance and punchlines of the physical and humorous. Wakanda’s amazingly resourceful and empowered guards, the Dora Milaje, turn up to bring in Zemo. A condescending John Walker is utterly and embarrassingly emasculated by them in a matter of seconds, Bucky and Sam get to throw in a few delightful quips before throwing in to the battle (though they don’t fare much better) and Zemo, clearly delighted and bemused by the ensuing melee quietly vanishes into the shadows. The only grumble is that after such a collision, it’s not clear where the Wakandans and Zemo end up.

Anthony Mackie’s Sam Wilson gets the main stage, but though Sebastian Stan is more in stand-by action-mode this week,  a flashback to him finally triumphing over Zemo/Hydra’s programming is delivered with style and packs an emotional wallop despite the lack of dialogue.

The core-concept of The Falcon and the Winter Soldier series has seemed to be about WHO should be the next Captain America and yet the truth is that the show is actually asking IF there should be a Captain America at all.  Zemo notes that Steve Rogers noble mix of idealism, patriotism, pragmatism and heart was the exception to the power-corrupts maxim and everyone else who has had the serum has failed to be  ‘better’ than they were before it. But in an era where the real-life country is struggling with its identity and values, how can we expect it to select a singular representation that’s any less adrift?  As the blood drips off the red, white and blue in the closing seconds of the episode, it’s become not just a question of who carries the physical and metaphorical shield of a nation… but how it carries its soul.

It’s likely that the complexities of truth-and-consequences and the cause-and-effects issues will likely produce different and strong opinions around the weekend water-cooler… though there’s so many worthy and difficult issues in the mix, that with only two episodes to go, can it really pay them all off in a way that satisfies the audience? 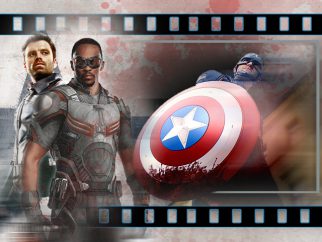