A difficult case brings out some team-tensions which may only increase with Krendler's decision about the conspiracy investigation...

The long-dead remains of a boy are found within a dry-wall cavity. He’s fully clothed but with a mortal wound to the back of the head. It appears to be a new breakthrough on the case of the child who disappeared months before. Thanks to some astute investigation by Ardelia, who remembers a similar case, it’s clear that this tragic end isn’t the first for the killer. But who would want both this young boy and the previous victim dead? DNA might hold the answer, though not the one expected.

Elsewhere, when Clarice realises that her attacker and her boss’ lawyer are one and the same, it complicates the far-reaching conspiracy investigation. But who will prove to have the most power and influence?

Clarice often feels like Criminal Minds: The First Generation, but that’s hardly an insult. There’s actually a nice balance in this week’s episode  – an installment that manages to move along the wider conspiracy angle as well as having a singular procedural investigation to unpeel and still finding time to look at the personal lives of its ensemble.

One might have thought that the show would drag out the fact that we know the lawyer that Krendler (Michael Cudlitz) may be hiring and Clarice’s attacker are one and the same (but the team did not). However it’s mere minutes into the episode when Starling happens to spot a magazine and paperwork on Krendler’s desk with Hudlin’s picture and alerts them. It’s entirely reasonable that the team might initially doubt Clarice’s claim – she is literally hours back into her job after compulsory leave – but to their credit they all accept (reluctantly) that it’s worth checking to make sure all their Ts are crossed and Is dotted. Thanks to Tripathi (Kal Penn) tailing Hudlin (Raoul Bhaneja), further links are established (Hudlin entering the Lockyer DNA labs, who are connected to the murders of various whsile-blowers and which seems to point to further dubious goings-on).  The audience wonders if Hudlin is aware of the information being gathered against him, but whether he is or not, the lawyer makes it clear by episode’s end that while he’s offered to find ‘dirt’ on Krendler’s wife (something Krendler is uncomfortable with), he also has dirt on Krendler himself and demands that the investigation be dropped or there will be consequences. We hope Krendler is a straight-arrow who will be driven to investigate even harder, but we’ve already seen him bend evidence (albeit to protect the team)… and yet it’s a surprise when he goes to the team and tells them the investigation is being dropped. That capitulation seems disappointing to us and a huge surprise to his colleagues (who know nothing of Hudlin’s threats), though there’s not a single doubt that the ViCAP team are going to follow orders in this regard.

The ‘crime of the week’ regards the discovery of a body of a young boy, holed up in a wall.  Ardelia (Devyn Tyler) grew up in the area and spots connections to a previous case with a similar description, but eager to get some of the street-experience being garnered by room-mate Clarice, she wants formally in on the investigation and credit where it’s due. Krendler promises her both. She proves invaluable in getting the trust of a family who already feel let-down by authorities. What’s visually-disturbing quickly becomes icky in a different way. Despite each of the two incidents involving a ‘one-blow to the back of the head’ death (where the victim likely felt no enduring pain) there’s no signs in either example of the child being abused, but the team try to find some causal link. DNA is used to rule out the immediate family of the victim and their neighbours, Marybeth and Gerry. But a further Mitochondrial DNA test suggests the culprit could be a blood-relation of Marybeth. Could it be her longlost son?  Clarice and Ardelia finally work out that Gerry isn’t actually Marybeth’s husband but her biological son who ‘took the place’ of Marybeth’s first husband after he left – with all that implies. Gerry, disturbed by the deceit and his abuse, apparently broke down and told the truth to the two  boys and then killed them to prevent his shame getting out. It’s a twisted, tragic end to a difficult case.

Murray Clarke (Nick Sandow) is becoming one of the most interesting members of the ViCAP team, something of a curmudgeon and sometimes casually racist and offensive without thinking, but loyal to the team and to justice being done. But as he starts to bristle during the child-murder investigation, we uncover more of his background. Those SPANK magazines in his drawer aren’t for any executive relief… his sister was abducted when he was a teenager and there’s been possible sightings of her in illegal videos. he’s been searching for her ever since without luck.  The separate disappearances of two boys – each eventually found in different areas but their bodies each holed up in walls – makes him visibly frustrated and angry, taking out those frustrations on the team for which he’s going to have to apologise.

It’s also great to see Clarice and Ardelia’s time away from the job and in the apartment they share. The acting, choreography and dialogue shows how comfortable the two women are with each other, that natural intimacy and bond of being able to insult and praise each other based on life experiences. When Ardelia’s grandmother shows up with celebratory food, it’s clear the dynamic is a fun one and it all brings a welcome respite from the grimness that often permeates through the dark and cynical vibe the show cultivates.

This is still a strong show, perhaps only now finding the wider balance for a long-game narrative and still with a few errant plates spinning that it will have to deal with to gain true momentum… but on a weekly basis, it’s a strong primetime contender. 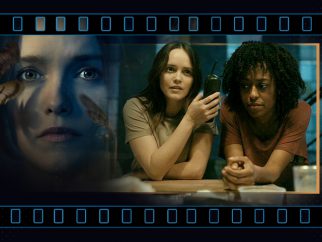