Air gets toxic in a farming community, but what will the consequences be of removing the debris?

When it starts to rain in a rural farming community in Nebraska, the inhabitants start to feel unwell, but quickly recover. However the moment any of them try to leave, they collapse and die within seconds. Alerted to the situation, the team arrive but don’t have any immediate answers.

It appears that a piece of debris is effectively terra-forming the immediate area, making the inhabitants able to breathe the chlorine-soaked atmosphere, but not the original oxygen-based air.  As the affected area starts to grow, the team has an impossible choice. Removing the debris might stop the expansion, but it would almost certainly doom the people inside.  Now it’s not just a race against time, but may be a pragmatic choice between the small community of migrants and the outside world…

Debris demonstrates one obvious concern here, the fact that the solution to the week’s problem is a ‘deux ex machina’ element. Instead of something that organically grows out events, it’s a ‘we have an impossible situation here…wait… perhaps a never-revealed piece of debris can magically provide a stunningly convenient stop-gap?‘  That may work  once in a while and can be forgiven every so often, but here it feels a little like weak plotting that might have been better had that solution been referenced in any way before. Yes, the counter-argument would be that, in reality, this episode is not really about the scavenged dilemma of the week but about the human element, the choices that an individual has to make when presented with an uncomfortable, almost impossible situation where they have to make an immediate choice in how to react. That human, moral and emotional core is what distinguishes the series from other ‘phenomena’ shows, but it’s something that can’t be used as a crutch too often in place of a proper, organic denouement.

The farming community, essentially a well set-up and legitimate migrant-work camp, has lots of possibilities to explore on a social level- but Debris really doesn’t address that, except using them as a backdrop. Yes, there’s the individual tale and  ‘extended family’ aspect of whether late arrival Efraim (Alexander Soto) –  who is given quite the thin, hard edge of the wedge by the gathered scientists and agents – will be allowed to ignore protocols and rejoin his brother’s wife and child, whatever their fate, but one can’t help wondering  how the story and decisions might have differed in priorities if it was a whole town.

The friendly chemistry between the two lead characters continues to be fun to watch, exploring their different outlooks on both life and the job. It’s not adversarial, far from it, there’s a huge mutual respect between the two of them… but their separate Company lines are not quite in parallel and their approaches and experiences sometimes dictate  wholly different conclusions and reactions. Beneventi’s military background is more cynical than Jones, though when we see him talking about the loss of a previous partner with an old comrade (Beck, played by Steve Bacic), it’s important to note that he appears to see emotions and empathy and their results as more important than Beck does. However the show throws in some inevitable dilemmas when Jones is told by her superiors that her father may still be alive. If that’s not enough to halt her in her tracks, her MI6 boss (correctly) notes that the CIA and Beneventi almost certainly know that too. (So the lay of the land is now that Beneventi doesn’t know that Jones now knows and that she now knows he knows… do try and keep up!).

Elsewhere, there’s a small scene with Maddox (Norbert Leo Butz) that’s high on implication as he spends quality time with his son – who has some kind of learning disability. In picking up his wife’s phone and the caller hanging up, there’s a sense of foreboding that something’s up, but as we’re still questioning Maddox’s loyalties, it could go in a number of directions.

A far more template outing than one might like, but Debris still proves to be ambitious in scope. It’s early days – far too early to see if the show has the blueprint/series bible it will so desperately need when dealing with such weighty-issues as terraforming, dimensional rifts and international conspiracies… and to make them connect and work in the long-term – but still enjoyable. 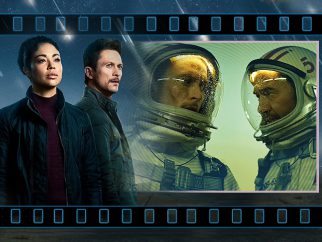