After another Debris encounter, Beneventi is forced to relive a battlefield trauma, but will he survive it?

Investigating a potential debris crash site, a team comes across a lone woman sat in the grass and saying she needs to speak to Bryan Beneventi. When Finola and Bryan arrive, the woman, named Mariel, is taken to a secure facility and Bryan begins to realise that the words she is saying relate to conversations he’s had in the past – particularly during a time in Afghanistan where a decision he made had dire consequences. When Bryan makes physical contact with the woman he’s thrust into a coma-like state… and begins to relive the battlefield events.

Finola desperately searches for a reason and a solution, but first she’s going to have to learn more about Bryan’s past – though Maddox may know far more about past events – perhaps even more than Bryan himself…

Given that the series has, to date, been more concerned with Finola’s history than Bryan’s, this week’s Debris sought to rectify the balance. With virtually no reference to the events and character/plot developments of the last two episodes (which, technically, may or may not have happened), the new ‘debris’ element is really more a narrative device rather than a great mystery – essentially just a reason and way to tell an aspect of Bryan’s backstory. The shrapnel of the week  is a rather nondescript piece of material that seems to have influenced a woman in the vicinity to only respond to questions by repeatedly saying Bryan Beneventi’s name… which, as mysterious effects go in this series, is a bit mundane. However, it does get us to where Bryan encounters the woman and immediately collapses…

Bryan’s sudden lapse into an almost comatose state is referred to as a ‘idiopathic neurological event’ which sounds dramatic but actually translates as a more one-size-fits-all ‘unexplained brain event’. The reasons for it happening are handwavery (Finola notes that the ‘cloning’ aspect uncovered in the You are Not Alone episode, may have led a network within the debris to replicate Bryan’s memory and make him relive it, which feels like something of a leap and offers simply a ‘how’ rather than ‘why’ to the story). But if you excuse the rather distracting beard that’s been stuck on to Tucker’s face for the ‘flashbacks’, it tells an interesting enough war story. Beneventi may have been a career military man – and clearly a respected, weathered operative- but is clearly a man with a conscience, raising many of the questions that haunt soldiers about the difference between original mission, intent and result. He’s probably very good at killing, but genuinely serves wanting to make a difference rather than simply defend a directive.  It’s painfully obvious throughout that Asalah, the young woman he befriends while in Afghanistan isn’t going to get the Elton-John-piano-playing dream she hopes for and will likely come to a sad end. Apart from briefly asserting some lucidity (and the modern conduit / undeveloped sacrificial lamb / collateral damaged Mariel – played by Erin Karpluk – appearing in his flashbacks), this is the kind of story that could have relayed much of its information without any extraterrestrial elements.

We should note however that at least the episode’s title refers to the name of an actual named character in the episode, Asalah (played by Zarina Sterling) and not some vague, obscure reference which has been the pattern thus far.

Elsewhere, Maddox continues to be as shady as ever – taking out some debris from a large warehouse without the necessary paperwork – but with no further clues to his reasons. Jones Snr. has one brief scene where he shares a phone message with his daughter and tells her he’s going off across the US to pick up some needed equipment. In a series about dimension-breaking artefacts, this seems far more fantastical. Almost all the alphabet security agencies want him in custody or dead or believe he’s dead already, so it seems inconceivable that a journeyman joyride would or could be on the cards. Finola might be distracted, but she should have shut down that notion immediately, or, at least, not discussed his continued existence and plans within a mile of a top-notch military installation. Again, this feels like shuffling off that element of the mythology with a few scattered breadcrumbs offered rather than the central urgency you’d expect of it.

And, there at the end, is a disconnected epilogue which seems to obliquely talk of Native American legends. If this is another disparate element to add to Debris‘ growing mythology, the show might want to deal with at least some of the existing mysteries first (for starters: what is Influx’s full agenda, what is George building, why does Bryan have to take injections, what is the greater scope of the debris and how relevant are those audio clips in the closing credits?) especially as there’s only a couple of weeks left in this run and – sadly – no guarantee as yet of a pick-up for a second run, despite the obvious potential in the story. 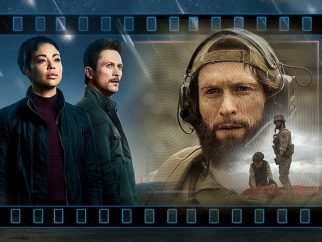