In 'A Message from Ground Control', the Orbital base itself is the scene of strange debris activity...

Finola and Bryan are called back to the Orbital base where various pieces of debris appear to be moving under their own volition, eventually disappearing and reappearing through a portal. Is something being assembled in between and if so why and what? When base personnel succumb to outside control, the immediate thought is that it an attack by the influx group.

But when Bryan discovers that a lower-level of the Orbital facility is getting ready to weaponise the debris material, both he and Finola begin to wonder if they can trust Maddox and what his true intentions may be.

With lives on the line, can they stop the strange events at the base and if not, what will happen next?

It would seem likely – even imperative – that a ‘bubble’ show with a growing mythology would bring its A-Game to the final episodes of its first season, raising the stakes and tensions. And yet the penultimate episode of this run of Debris is frustratingly lean in both departments. It’s not that nothing happens… on paper, a giant warehouse full of accumulated debris and some unknown force joining them together for some equally unknown purpose sounds like a nice ramping-up of the story. But in practise… it’s really just a lot of talking, some unlikely conversations, a few meaningful looks and an ending that makes you wonder if there is an over-all plan at all.

In industry-terms, some series suffer from a character suddenly carrying the ‘idiot-box’, essentially someone doing something completely stupid and unlikely, simply to give the narrative and plot some pace. Debris, despite innovative ideas and high-concept ambition, sometimes suffers from the reverse – a character doing something highly convenient and surmising something that’s a leap of logic to save the day. Here it’s even more overt, firstly with dialogue akin to the casual idea of reversing polarity (having echoes of the famous Doctor Who fix-all phrase) and then  Beneventi  – the more skeptical  and pragmatic member of the team suddenly becoming the convert to ‘greater forces’, a mostly unseen and convenient epiphany – courtesy of last week’s Mariel and Asalah briefly reappearing – something that leads him to tell everyone to simply go with the flow and let whatever is happening at the complex run its course. Puzzles and huge mysteries are rarely compelling when a sudden lack of action is the solution. (With echoes of Close Encounters of the Third Kind, everyone watches the skies as the assembled blue orb flies off, which again feels like something of a trope rather than a homage.)

George Jones is still separated from Finola this time off visiting a a scientific array, once again pushing buttons, muttering and offering sage advice to his daughter on an unsecured line while she’s surrounded by people who would likely kill him if they knew for sure he was alive. For a character whose ‘death’ anchored one of the main characters for the first half of the season and built-up as a huge off-screen shadow, he’s simply become a rather bland exposition device for the latter half, shuffling around and remembering/forgetting key things important to the plot. I don’t wish him harm – but he was far more interesting when he was dead! As for his assertion that he now knows that the machine he can build will help them locate every piece of debris on the planet… well, we all know that’s hardly likely to work out well – otherwise the entire series loses one of its key elements, therefore some of the imperative is immediately lost.

There seems no narrative centre as to what the Orbital project is (is it even trying to work out the truth behind the debris, as we’ve been led to believe, or is it just trying to exploit it?). Frankly, we seem to know  more about supposed ‘bad guys’ Influx than we do the ‘good guys’ (except Bryan and Finola) at this point. We also find out that minutes after George tells Finola he knows where they need to go next, the fact that he’s identified that location is relayed to Influx – so someone (which really has to be George himself because who else is there?) is certainly playing both sides too.

I’ve really been hoping that Debris gets picked up for a second run – the potential for something X-Files and Fringe-like is quite obvious and there’s every chance it could blossom. But its story-engine has definitely been stalling in the last few weeks and feels dangerously like a good pitch in search of something more concrete… so next week’s finale will have to turn things around… and with no renewal announced, will it be a close or closed encounter to follow? 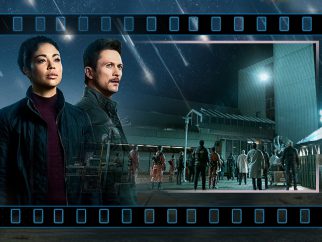