It seems that Layton and Snowpiercer have an impossible choice to make as Wilford heads up-train...

Layton realises that the recent chaos aboard Snowpiercer may have been caused by Wilford, but that despite or because of it, the popularity of the train’s creator is growing by the day as he manipulates events. A series of technical problems begin to happen in Snowpiercer’s systems, some the result of obvious sabotage and some that seem mightily convenient.

When one important system fails, the only way to replace it is with a part from Big Alice and with the co-operation of Wilford. Will Wilford agree and even if he does, can Layton get Wilford to the engine without him exploiting his presence as a rallying-cry.

As things go from bad to worse, it appears that there are only two possible outcomes: Failure… and Wilford will doom them all …or success, but Wilford will finally regain control…

“This train is one dirty look away from civil war…”

The opening monologue of the week is provided by Roche (Mike O’Malley) and in many ways he personifies the internal conflicts of the train. One of the key faces of law and order he is a fair man – having to juggle morality and pragmatism, but in a different way to Layton’s revolutionary approach. Though originally on opposite sides, Roche now sees Layton as a decent man but one who was unable to fully deliver on his promises in the wake of that revolution. He has no illusions about Wilford being anywhere near a decent man, but if he’s the popular choice, then Roche feels he must defer to the will of the people – and as much as Layton is fighting for his unborn child, Roche must take into account the safety of his own family. By the end he seems to have made his choice – but it would be unwise to count that decision as his final word.

It’s easy to write off Sean Bean’s Wilford as an egocentric, megalomaniacal sociopath who is a few signals short of a transportation hub (and all delivered with zealous energy by Bean, in  his best role in years)… and while some of those descriptions are undeniably true, The Eternal Engineer highlights the fact that he’s not remotely stupid. Alongside that monstrous ego with a flair for a flourish, is someone who is a ruthless strategist and by the end of this week’s episode, you may not be sure which elements he planned to perfection in advance and those he simply exploited in the moment, but you’ll see him – by no accident – being exactly where he wants and needs to be and, for the moment, his enemies humbled. You’ll boos, you’ll hiss, but it’s hard not to argue he’s at the top of his game.

There are lots of other, smaller key moments: we see Breachman Boscovic (Aleks Paunovic) finally understanding how much his long-placed and unquestioning trust in Wilford has been misplaced and its devastating for him and his sense of purpose in the wake of the murders that robbed him of his team. Lena Hall as Miss Audrey continues to play the vamp and it’s still impossible to know exactly where she stands and Alison Wright’s Ruth continues to be stoic but clearly troubled.

Director Rebecca Rodriguez once draws strong performances from all and makes excellent use of claustrophobic interiors – sometimes chaotically busy, sometimes still and subdued – dynamic choices of lighting and punctuates them all with frigid exterior shots that chill the blood.

Due to sporting pre-emptions, there won’t be an episode next week, but the following week sees two back-to-back episodes, effectively creating an almost feature-length finale… and with major questions regarding Layton, Wilford, Melanie, Josie and others one suspects there’s simply too much happening to tie off everything with a neat bow. (We’ve already had a glimpse of one upcoming event from Mel’s point of view).

But with a third season confirmed, it could be quite the cliffhanger… 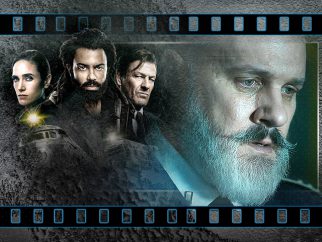