Cold without, colder within: With Mel readying to leave, Snowpiercer's power-plays continue to put strain on the train...

Mel prepares to leave Snowpiercer to spend a month at the tracking station in the hope of tracking the thawing Earth. But everyone is aware it could be a suicide mission and Wilford relishes every chance to use that fact against his enemies. He’s not a patient man, but right now, he’s willing to bide his time, playing theatrically to the galleries and asserting his ruling ways to any who question him.

However it’s clear from the assaults happening on Snowpiercer and from Josie’s words of intent, that the recent revolution has left scars that go beyond skin-deep and even without Wilford manipulating everyone, emotions could be about to heat up aboard the icy train…

Though all of the current story-strands get some sort of coverage, this episode is essentially a study in continuing power-plays between Jennifer Connelly’s Mel and Sean Bean’s Wilford with  Daveed Diggs’ Layton and Rowan Blanchard’s Alex holding them to account.

What is interesting to note is that despite the big name players, the one to watch is probably Snowpiercer newcomer Rowan Blanchard. Alex is the one character, damaged though she may be, really speaking truth unto all powers and very likely to be the lynch-pin around which this entire season turns. Still bristling and righteously angry at being left behind during Snowpiercer‘s original departure all those years ago, Alex has found the reunion with Mel a mixture of conflicting emotions. She reads Mel the riot act for her abandonment but still obviously cares about mother and admires her achievements… and though loyal to Wilford, she’s the person who can casually and firmly stand up to him without feeling his wrath (at least directly) and who is growing less tolerant of his faults. In an episode full of great dialogue, she also has the best lines (“You leave once, that’s a decision. Then you leave me twice. And then, that becomes a choice…” she tells Mel).

Bean’s Wilford continues to be interesting and a guilty-pleasure, both a force to be reckoned with and his own worst enemy – and it’s easy to see why Bean grabbed the role with both hands. In his grandiose demeanour, it would be easy to portray him simply as a crazed villain, but Bean and the script give Wilford leeway to have some sort of method to his madness. He’s driven by absolute power, for which there will never be enough; a man who measures self-worth not by what he’s achieved, but by his ability to humble others and deny them the same. As we’ve seen so far he can inspire pain and tragedy on a whim and revels in the pain and control he feels a constant need to demonstrate. He’s an Ancient Roman emperor made flesh, or perhaps a politician of a more recent and different hue – driven by ‘ego, ‘id’ and a sense of an unquenched hubris.

Connelly (striking in look, demeanour and performance, as ever) as Mel, readies to leave Snowpiercer to activate the equipment that will start to scan the Earth’s slow thawing and this episode often provides focus for what could well be the last moments before a suicide mission. The show is making her one of the heroes of the piece, which she rises to with aplomb, though the unexpected return of Josie is bound to cause wrinkles. (It’s not clear if Mel knows of Josie’s survival but Josie has no qualms about telling Layton her feelings on the matter). The question will be: by the time this season is done, who will people be supporting?

There’s some really artful direction here too, knowing when to be kinetic and when to be still. During the Mel/Alex dialogue the stationery camera merely shifts its depth of field depending on who is talking and it proves very effective. Outside the visuals are equally impressive as the train navigates a region of treacherous track to execute a dangerous maneuver that is essential for the trains’ survival.

Snowpiercer continues to impress, a masterful microcosm of social conscience in a week when the temperatures outside are also plummeting. (One question, though. In all this confusion, where’s Jaylin Fletcher’s Miles, Josie and Layton’s adopted son who was so important last season but hasn’t even had a mention so far?) 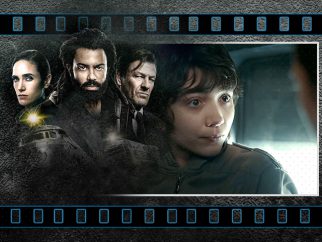