As Vision begins to probe his reality, reality decides to probe back. But who is really in control?

It isn’t easy raising two infants, especially when they age too fast. But that’s not the only thing bothering the Vision as he begins to notice not only cracks in his world’s facade but also that Wanda doesn’t seem to be as worried about them as he is. As much as he seeks answers as to what is outside their town, Wanda seems to be adamant about keeping it out.

And on the outside… Darcy, Jimmy and Monica find themselves at odds with the scale of intervention that  SWORD’s Director Tyler Hayward has decided to implement. Will their discoveries about the changes within West View help solve the problem or merely add more questions?

And they better act quickly, because a silver-haired new arrival is about to cause confusion of multiple levels…

There’s a lot to unpack in the latest episode of WandaVision, the first episode that balances the events inside and outside the West View bubble fairly equally and also very successfully. But it also underlines that this is very much a love-letter series for the die-hard Marvel fan… it’s twisty-and-turny enough for the most loyal viewer to be perplexed and it would be nigh on impossible and perhaps too much effort for a more casual viewer to appreciate the references, character-connections and sheer scale of ambition in its layering. Seek out some of the videos online examining ‘easter-eggs’ in the show and what might have sounded ridiculous for other shows fits all too well here – even minor imagery, words, repeated concepts etc seem all too plausible to be accidental, though it’s hard to tell if these are genuinely fishy or just red (scarlet ?) herrings.

We’re now into a ‘something for everyone’ phase of the story and it’s a tribute to the structure (which, as we’ve noted, has it’s pros and cons) that it is still impossible to know exactly where the show is going and how much is active misdirection.

Olsen plays Wanda very differently in different scenes. Though we now believe that she’s the instigator of the reality-switch rather than its victim, we see moments when she’s in complete and assured control (such as her confrontation with SWORD outside the town’s shielding) and yet seemingly still a little confused about her situation during several sitcom moments. We now know she stole Vision’s body and appears to have reanimated it – ewwwww – in a moment of grief that she’s continuing to play out, but is she the ‘big bad’ here or is something else going on? One other thing is the subtle change in her accent. Between Avengers movies, Olsen dropped Wanda’s original ‘Sokovian’ accent with the explanation being she’s assimilated into western culture… but here it makes a slight return, almost as if she was reverting to an earlier period – just as the faux-commercials reflect aspects of Maximoff’s troubled past. We already knew that Paul Bettany was a great actor but his portrayal of the troubled Vision (and his growing unease / discovery that he and the world around him is being manipulated by the person he loves) works really well. We know that we’ve only seen the beginning of that confrontation, but it’s clearly about to escalate.

Kathryn Marie Hahn continues to sparkle as Agnes (who may or may not be a version of the comics’ Agatha Harkness), Teyonah Parris as Monica Rambeau continues to be a huge asset and Kat Dennings and Randall Park ( as Darcy Lewis and Jimmy Woo respectively) continue to push for an X-Files-type MCU series of their own.

Of course, the main talking point will be the visitor at the door in the closing moments of this sixth episode. While not being the biggest surprise to those who might have seen spoilers about upcoming casting on the internet, many a fan’s head will have exploded at the sheer implications. For the very few who don’t get the sleight of hand here: it’s not just that Pietro/Quicksilver is apparently making an appearance after the character was killed in Avengers: Age of Ultron (a fact already acknowledged by the show), it’s that the character isn’t being played by Aaron Taylor-Johnson but by Evan Peters. Peters played Pietro in the X-Men movies during a time when Marvel Studios and Twentieth Century Fox had strict dividing lines and rights issues about which studio could use which characters. Fox could use X-Men characters from the comics but not Avengers characters from the comics and the reverse was true for Marvel Studios. The catch came that Pietro had ties to both comic subsections and ended up appearing almost simultaneously for both studios in very different interpretations. So how is it remotely possible that it’s the Evans’ version and not Taylor-Johnson’s version we have making his entrance?  Of course, it’s possible that it’s just an in-joke (a ala Darcy’s quip about Wanda ‘recasting’ the role), but as much as a multilevel twist of soap-opera proportions in delivery, it feels like a mission statement and course correction rather than just a cliffhanger excuse for a throwaway punchline. Given that Wanda will be involved in the second Doctor Strange film ( In the Multiverse of Madness), it does feel like some connective tissue and sinew is being established in that direction already.

Previous Marvel-related shows were often good, but they had to work at arms-length from the movies, almost apologising when they paid more than lip-service to big-screen action (think ABC‘s Marvel’s Agents of SHIELD). This first entry in the much-closer working relationship between all arms of the Marvel/Disney empire has no such qualms – everything is connected.  After an interesting start and a problematic slower momentum, WandaVision may now be both playing to the strengths of the MCU to date and yet laying out the groundwork for something totally new… 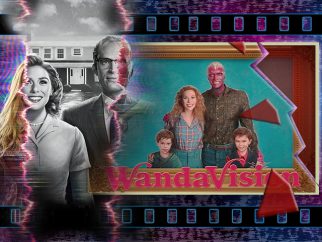