'Star Trek: Discovery' reaches its S3 conclusion, but will all the arc element resolutions feel satisfactory?

Osyraa still has control of the Discovery and as ‘peace’ talks break down she unleashes her forces against the Federation. Despite the timely arrival of allies, it looks as if Vance will have no choice but to blow the Discovery out of the sky.  In a last minute gambit, Burnham persuades him to trust her, but as forces onboard battle for control, will Vance’s reprieve spell victory or disaster?

And far away in the nebula, with time running out because of radiation-poisoning and the structural fractures Saru tries to establish an emotional link with the confused Su’Kal without triggering another ‘Burn’ like blast which would affect the entire galaxy. But how do you clam a child-like persona that has no understanding of life beyond their holographic bubble?

We noted in the the review of last week’s penultimate episode that it seemed like an impossible task to fit in to one episode all that was needed for a satisfying resolution to the current season and though the finale runs a little longer than the average episode, that opinion still feels true. Neither of the two threads – the siege aboard the Discovery and the fate of those left behind in the nebula ultimately feels fully rounded – both are catered to and resolved, but it feels like the season’s earlier story Terra Firma was given the two-part format that it didn’t deserve at the expense of the finale that probably needed more space to breathe to work.

Onboard the ship we have a cat-and-mouse scenario of brinkmanship as the captured Burnham and Book are once again able to slip the clutches of their pursuers (seriously, bad-guys, that’s just careless). While the turbo-lift conflicts are arguably well-rendered, they once again don’t make a lot of sense with the vast amounts of wasted space in the suddenly city-sized ship. (Like the script, it feels like those wider areas could be a lot tighter without losing the grandeur).  Janet Kidder gave Osyraa a bit more depth in later appearances with the feeling she could be more nuanced than she first appeared but this reverts back to basic boo-hiss mode that seems to squander the growth. Michael’s hand-to-hand combat with her is fine in execution, but feels like choreography rather than battle and really lacks a climactic coup-de-gras even with a fatal shot (when you’re not sure, as a viewer, if the baddie is dead or just wounded but they have been eliminated – it’s always unsatisfying). It’s also a bit hokey and convenient to have a regular character display a talent never seen or spoken of before to save the day – with Oyin Oladejo’s Lt. Joann Owosekun suddenly revealed as a champion breath-holder as needed and the empathic abilities of Book allowing him to handle the Spore Drive.  The Sphere intelligence, now evenly distributed between overtly-cute/marketable-as-toys but disposable droids has also seemed an on/off plot-device used far too often as a literal deus et machina to save the day but with no consistent substance.

In the nebula, there’s no real climax to the story as it resolves, the great resolution to the big ‘Burn’ storyline coming down to patting an alien man-child on the head and telling him everything’s going to be okay. Despite some nice effects (the wraith-like apparition being notable), it’s just people walking around looking worried and wearing random new prosthetics – with the exception of Doug Jones who seizes the rare screen opportunity to be ‘human’. It feels like it’s a long and sometimes emotional, sometimes lethargic thread in which to write-out Jones (though show-runner Michelle Paradise has since confirmed Jones will be back full-time next season, which is good as he’s one of the show’s strongest performers). One nice touch is that the ethereal Gray, for some convenient reason is given physical form and can be seen by the others. I never realised that Ian Alexander, who plays Gray was also the basis for another androgynous character, Lev in the acclaimed 2020 PS4 game The Last of Us 2, but they give a solid emotional performance here, even in limited screen-time.

There are nice touches along the way: the return of Adil Hussain, finally reprising his Aditya Sahil role from the opener,  some interesting camera-work to accentuate the holographic environment in the nebula, the the promise of a Federation on the mend and the 801st screen adventure finishes with the original Trek music (though it might have been more on-the-nose for the 800th).

That Hope is You – Part 2 (previously referred to in places as ‘Outside‘ before broadcast)  appears to have a remit to finally set the series and the crew’s new course in stone. After three significantly different seasons, we leave things on a fairly even keel:  we’re definitely staying in the 32nd century, the Discovery has a mission statement (as a ship boldly redistributing dilithium to the galaxy), a change in uniform and a new captain.

That last element seemed to be part of the inevitable plan to eventually put Burnham in the command chair, though the rationale for that is still somewhat dodgy to say the least. Michael has hardly been the poster-child for the command structure and there’s an argument she’s least suited for command. More often than not her actions have been successful because of sheer luck than any real battle-plan and she’s been willing to risk lives other than her own on impulse. The first season saw her basically ignite a war with the Klingons, the second had her being part of the cause-and-effect of the Red Angel storyline and ended up with her whisking everyone into the future. Most of her stories thus far have seen her going against the grain with very little fall-out to herself except bucketloads of tears and self-righteous pontificating. So for the by-the-book, but perfectly-reasonable Admiral Vance (Oded Fehr) to suddenly start praising her and extolling her ‘qualities’, equating her to his own daughter seems like a huge rewrite of his brusque persona – he could easily (if uneasily) have backed her promotion while Saru is away with a ‘You have lots of qualities, but I’ll be watching you closely because so much is at stake for more than you‘ and sounded far more consistent with the same result.

Sonequa Martin-Green  is fine, but if Burnham is going to be a good captain for the already confirmed fourth season  then she’s going to have to grow considerably to impress. As a season, it was a huge improvement on what came before, building on the better elements we’ve seen along the way. It was enjoyable without being memorable, but Discovery still seems undecided on its tone and direction. If the last episode does set up the new status-quo, perhaps we’re finally ready to go boldly as the full-on ensemble show it’s always had the potential to be mixed with the obvious echoes of the original… 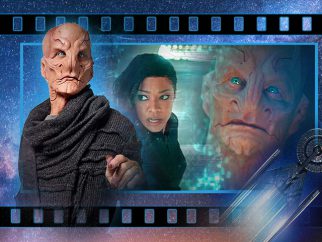