It's 'Die Hard' meets 'The West Wing' as Discovery and its crew fight a battle on two dangerous fronts...

Realising that the hijacked Discovery is setting course for the Federation hub, Burnham and Booker have to abandon their friends in the nebula and pursue the ship in an attempt to make sure it doesn’t gain entry to attack the fleet. But even after a last-second collision alerts Admiral Vance that all is not as it seems aboard the craft, it appears that everyone may be underestimating Osyraa’s plans. Rather than opening fire, she wishes to open a treaty, saying she wants a pragmatic alliance between the Federation and the Emerald Chain to benefit the galaxy as a whole.

While Vance looks at her detailed proposal and tries to work out Osyraa’s true endgame, the crew of the Discovery try to take back the ship against Osyraa’s forces – but it looks like they won’t be able to do it without help and sacrifices…

In many ways There is a Tide… directed by veteran Jonathan Frakes, wants to be both Die Hard and The West Wing.  On one hand you can’t ignore the imagery of a lone agitator literally crawling through shiny ventilation shafts while being pursued by forces that have taken over the structure. Burnham might as well have painted ‘Ho Ho Ho Now I have a phaser…‘ on the wall. Though she doesn’t seem that good at the hand-to-hand combat (she’s stabbed in the leg while busting some wrestling moves minutes after venturing out) she can walk across glass, blast people out the airlock with aplomb. She can also snark at those in control even when it might have been far more strategic to keep quiet and keep moving. It’s also interesting that we finally get to see a Vulcan nerve-pinch from her – it’s been a while since her Vulcan upbringing has even been referenced.

On the other hand, Vance and Osyraa essentially have to sit around and negotiate a contract which, on the face of it,  doesn’t sound half as exciting. However, Oded Fehr and Janet Kidder ensure that it’s kept interesting. While not reaching the sheer charismatic zip of the Michelle Yeoh / David Cronenberg exchanges a few weeks ago, the two characters (and the actors portraying them) give a level of nuance and style to proceedings and it’s a tribute to their scenes that we might have to reassess our opinions of both. Vance is truly committed to the higher values of the Federationa and has a dry wit(his admission of the origins of replicator food are fun). There’s no doubt Osyraa is a duplicitous opportunist with her eyes on power, but she’s also not quite the stupid gung-ho villain we might have expected from her early appearances. Yes, the plot demands she may make some predictable mistakes along the way, but otherwise she’s got a carefully laid out and more subtle plan han presumed. Federation oversight monitors the fact she’s not actually lying to them and though we know the Emerald Chain is the Mafia of the galaxy, the audience may begin to wonder if there’s at least some honest pragmatism to what she’s offering… an alliance between two parties who’ve both made questionable choices, one that would begin in small increments and assurances of change to the benefit of both. It’s not the ‘offer you cannot refuse‘ but as with all peace-treaties, would an imperfect start in an imperfect world be better than continued aggression? It’s a question that hovers around the negotiations even though you know Osyraa’s inevitably got a Plan B.

The rest of the bridge crew also get their moments as Tilly and her team use both subterfuge and skills to get rid of their immediate guards and start to help Michael undermine the Emerald Chain’s hold on the ship. Jake Weber makes an inevitable return as mercenary Zareh (proving once again that if you spare your enemies, they come back?) though, once again, he mostly postures and growls a lot. It seems unlikely he’ll be given another reprieve before we’re done.

There is a Tide… feels like the second part of a three-part finale – one that ends on an unexpected and tonally different note. The problem with a season having several story-arc threads is the emphasis it needs to alternate. Last week, the entire future of the galaxy was at stake as we learned the apparent cause of the Burn – and which left several of our cast members stranded and in mortal peril. This week we hit <pause> on that with none of the story taking place there. It’s not completely forgotten about – in perhaps the best scene of the episode, Stamets is furious that Michael’s decisions to protect Discovery and Stamets’ own knowledge by stopping him from returning to find his husband and fellow crew members left behind in the Verubin Nebula – though it’s a side-emotional issue that will have repercussions rather than the cosmic urgency to resolve that was the impetus of last week’s entry).  But it’s yet another changing of gears and viewpoints, something with which the improved show still has problems – going from ‘THIS is hugely important…‘ to ‘Wait, let’s put that on hold because THIS is very important!‘.  There’s now only one episode left to go and though the title ‘Outside‘ seems to suggest we’ll be heading back to the nebula next time –  it also  seems unlikely that Discovery is going to be able to satisfyingly resolve the two big dramas (Discovery being taken back from the Emerald Chain and preventing another Burn) as needed in just another 44 minutes of screen-time. Perhaps if Terra Firma hadn’t been a two-parter?

All indications are that the Discovery will be sticking around in its new era once this run is done, but one hopes it’s not another year before some of the key plot-points get tied up. 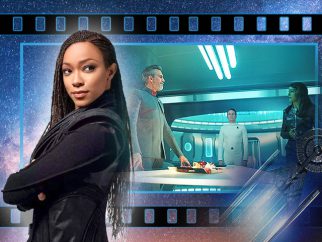