It's a New Model Army version of an old threat... but if the Earth needs saving, where is the Doctor?

The Doctor is being held in a high-security cosmic prison for crimes she doesn’t even remember… with no obvious way out and some unfortunate company to slowly pass the time. Meanwhile on Earth the remains of the Dalek (last seen in Resolution of the Daleks) have been mined and reverse-engineered for the their technology by billionaire Jack Robertson with his eye on creating a lucrative security force of similarly-designed shells.  What could possibly go wrong? After all, these are just law-enforcing robot shells not actual invading aliens… However the original Dalek DNA does not go quietly into the void and it soon becomes clear that the threat of the evil creatures is far from over.

But if the Doctor is still missing, what can be done? Perhaps the only way to defeat a bad Dalek with a gun is with a ‘badder’ Dalek with a gun… and an immortal Captain who won’t let any entendre go unpunished…

Even using the most tactful language, the last season of Doctor Who was something of a marmite run, considered an improvement on the first Chibnall/Whittaker season but finishing out with some major revelations/reboots/retrofitting of key elements of the mythology that did not go down well with some sections of fandom.  By the end of March 2020 we were now told that William Hartnell was no longer the first Doctor, the Doctor wasn’t even originally from Gallifrey and before a memory-wipe, he/she had once been a far more ruthless gun-wielding operative for darker forces… and that was all revealed shortly before Gallifrey went boom. Again.

So it’s perfectly understandable that die-hard fans and casual viewers alike might have been approaching this latest special with trepidation as interest.  Mostly filmed way back in the salad days of late 2019, months before COVID caused such havoc across the globe, the social-distancing aspect of its starting point (with the Doctor separated from her ‘fam’ and imprisoned in a vast Judoon gulag) and some ill-advised politically-driven policing decisions seem almost prescient.

In many ways the new special Revolution of the Daleks probably won’t change your mind of the current Doctor Who on whichever side you stand.  It is a slightly slower and slightly darker story though punctuated by many of the lighter sides of the Chibnall era to date. It’s social-distancing and alien ethnic cleansing – but with jokes. Meanwhile the Daleks within the metal shells have gone from wiggling flesh to full on back/face-hugging symbiotes that feel like a slightly less-acidic version of Aliens. The ‘new’ Dalek-casing design itself  doesn’t distract or annoy as much as some people feared. They were but pretenders to the throne, not too far in design from the ones we know and love/hate and by the end the originals are back.(It’s worth noting that it’s hard to remember the last time the Daleks were full-on terrifying genocidal space Nazis rather than annoying maxim-chanting racists – it’s always good to see them get beaten, but they’re like fleas rather than monsters with frequent use).  There are references to the Doctor having to deal with the issues raised in The Timeless Children and the sense of identity-crisis that it invokes, but the episode itself is more a tidy-up to the contemporary elements of the last run.  By its end we’ve sorted out the ‘new’ Dalek (exterminated as ‘impure’ by the originals), destroyed the errant Tardis left in working order in the season finale (by imploding in on itself) and made the Doctor’s Tardis a little less crowded with the departure of Graham and Ryan.

There are moments, towards the end, when it looks like Graham and Ryan might actually be killed off, though the show rarely goes that grim with regulars. Their decision to depart is more emotionally-linked, simply missing Earth and realising that ten months of waiting for the Doctor was time wasted. Truth be told, I haven’t been a fan of Tosin Cole’s performance, for me his Ryan has always seemed to be performed through a slow-moving fog which was assumed to be a deliberate choice but never appealed. At least in his final appearance he has more to say and do, but I can’t say I think the character is any great loss.  Bradley Walsh, however, was something of a revelation – his Graham was a solid everyday man handling the fantastical with a shrug and weathered insight and is further proof that the title character may need companions but that they shouldn’t always be romantic. It’s was no secret that Captain Jack Harkness was coming back and  John Barrowman did so in expected form, just about managing to refrain from making remarks about sink-plungers (oo-er). He’s neither wasted nor allowed to dominate proceedings, which is as it should be. Mandip Gill will be staying on and is given a fair amount of dangerous things to do. There’s hints of her growing feelings for the Doctor though it’s hard to say whether its romantic, sisterly or a mentor/pupil capacity – though she’d be wise to remember Jack’s observations about the finite chapter that travelling with the Doctor becomes.

A few things do niggle: Harrriet Walter’s PM (with an obvious hokey 10 Downing Street set behind her) felt like a luke-warm retread of Penelope Wilton’s Harriet Jones (with no chance of reprieve this time). By the end of his second appearance Chris Noth’s billionaire Trump-lite Jack Robertson is neither killed nor really redeemed in this outing and there’s no sign of the barely restrained contempt and the ‘I could destroy you with six words‘ of the Tennant era that would have felt fitting for the Doctor dealing with arrogant people who act above the law. In fact, not only is he allowed to get off almost scot-free at the end – he inexplicably seems to have seen benefits – perhaps so he can be brought back again at some point.  Equally, while it’s been fine to have Captain Jack back, the fact that he’s suddenly there in voice-over only for the ‘epilogue’ seems a little weird and robs him of a proper  ‘farewell’ scene. Perhaps the pandemic meant the only choice was somewhat obvious ADR – though his mention of Gwen Cooper adds a few more embers to the rumours of an imminent Torchwood revival. It also appears clear that the Doctor has a back-up variant of her usual clothes (which she changes back into off-camera) and that the chameleon circuit also disguises the interior of the craft enough to fool the Daleks as they bizarrely fly in, single-file, through its entrance.

The episode was good enough for a special (they have a track-record of being high-concept) with just enough drama, scares and laughs but it will be interesting to see a Doctor without her ‘fam’ in future and how that changes the beats of the show. It’s not known when Doctor Who will be back. Filming on the new run is underway but subject to constant COVID restrictions and review and so a late Autumn 2021 start, though still on the cards, is also open to change. We do know from the secret addendum to the episode that we can expect acerbic Liverpudlian comedian and commentator John Bishop to join the cast as ‘Dan’ whenever it does reappear. 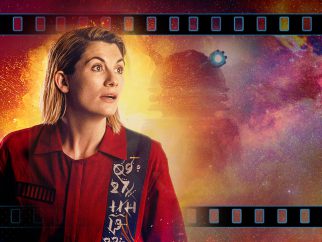