With rhythm and hues, it's time for Pixar to face the music - and it does so with all the heart and soul required...

Joe Gardner (Jamie Foxx) is a middle-school band teacher who takes pride in inspiring the students of tomorrow even if it can be difficult and with few rewards in the short-term. It was never what he intended to do, but his family made sacrifices along the way to ensure he had a better life and he’s ready to make the best of it. Maybe his life didn’t work out as expected and perhaps he put aside his passions for practicality, but life isn’t too bad.

But on the day his position is made permanent he also gets the opportunity to audition for a place in his hero’s band, the Dorothea Williams Quartet.  He’s good and he impresses her, but to make any offer official he’ll have to play a gig with them that night.  However on the way to prepare himself, Joe falls down through an empty manhole cover and suddenly finds himself on a stairway to the Great Beyond.

Surely there’s been some mistake? Has the universe robbed him of his big moment? Joe desperately tries to find a way back to Earth but to do so he’s going to have to go on a voyage of self-discovery, mentoring a new soul known as ’22’ (Tina Fey) who has resisted the best interventions of history’s most notable and inspirational figures or going to Earth at all.

In doing so, ’22’ will learn the beauty of life and music and Joe will learn to reassess his life…

Pixar have continuously remained at the front of animation, finding that sweet spot between cutting-edge computer imagery and the traditional, sometimes ethereal and emotional beats that have worked through the ages. Though many of its releases are geared at the young-at-heart there is proven appeal across the board with sly wit and a deeper message for those willing to grasp them. But in many ways, Soul (out on Disney+ this week) is one of the first titles they’ve done that specifically isn’t aimed at a young audience. Oh, it’s suitable for family-viewing in many traditional ways they’ll enjoy, but at its heart – and its soul – it’s aimed quite deliberately at the older audience, the ones who’ve reached a point in the lives when they wonder what happened to those earlier dreams, both the ones discarded and those that were exchanged for others along the way.

Noting both the fantastical amongst the mundane (an alchemy Pixar has established with aplomb), Soul is both down-to-Earth and abstract. The story has clear thematic and visual elements lifted from A Matter of Life and Death (the timeless 1946 classic starring David Niven and Kim Hunter) including the heavenly-records department’s faux-pas and the long staircase to the beyond and there’s also clear nods to 1978’s Heaven Can Wait, 1998’s What Dreams May Come and others… but Soul has a contemporary charm of its own.  The music is more than a lip-service hook – there’s a simply superb, a jazzy blues soundtrack delivered from Jon Batiste, Trent Reznor and Atticus Ross that becomes the beating tempo of the film and with an enviable attention to visual musical detail in the next-generation animation that brings to mind the key-stroke accuracy rendered in the more zany  Tom and Jerry 1947 masterpiece The Cat Concerto . It’s clear that the production was built around the music rather than other way around.

The abstract worlds of the Great Beyond in which Joe finds himself are  fun and nuanced – counsellors (all named Jerry but voiced by the likes of Alice Braga, Richard Oyade and Wes Studi) and Terry (Rachel House) as the troubled bean/soul-counter – resemble abstract Picasso paintings and those earthly beings who are ‘in the zone’ (including hippy sign-twirling / pirate Moonwind voiced by Graham Norton) are just as arty. But though Pixar never lets things get too dark, the ‘lost souls’ region, where figures lurch around like forlorn dark Baymax-shaped creatures strikes the right note of sadness and despair among the safer elements. Nicely pitched Earthly voices alsoinclude Phylicia Rashad, Cora Champommier, Margo Hall, Rhodessa Jones  and Daveed Diggs with Angela Basset playing Dorothea Williams.

Pete Docter, who also directed the likes of Monsters, Inc. and UP and Inside Out, continues to balance all the needed elements. Perhaps the ending feels like it’s missing just a few essential beats of its own to round things off – but if doesn’t quite pack the satisfying crescendo of emotional yardstick UP, it’s still up there in the Pixar firmament and the experience as a whole is a universally positive and fulfilling one that still hits most of the right notes. It’s  lovely Christmas concert of the senses that would likely earn it many awards, even in a year where competition (animated or otherwise) is sparse. 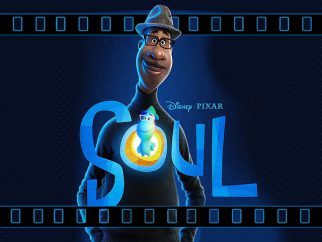