He can't save the Earth but can scientist George Clooney save an incoming NASA team?

A catastrophic atmospheric event starts to render Earth’s surface as uninhabitable and as the last few survivors head off in search of the tiniest hope of out-running it, only hoping they’ve remembered to bring all they need. One scientist Augustine Lofthouse (George Clooney) decides to stay near the North Pole. He is slowly dying of cancer, needing regular transfusions that he can administer himself, but he has one important duty.  The Aether space-craft is heading back from its expedition to see if one of Jupiter’s moons could be humanity’s next home. It’s been a success but because of the atmospheric problems, they have no idea that their mission is so timely.

The Arctic contains the only radio telescope remaining that might be able to receive their frequency and warn them not to return and given that Lofthouse was originally involved in locating this new  world, he feels it’s essential to finish the job. But when Augustine finds a scared young girl, apparently left behind in the mad rush to leave the base, he is reminded of the decisions that brought him here and the obstacles still to come.

Now the crew of the Aether and Augustine, separated by millions of miles, must find a way to re-establish contact. They can’t save the Earth but they may yet find hope in the darkness…

Though filmed in 2019,  The Midnight Sky (an adaptation of  Lily Broos-Dalton’s Good Morning, Midnight) might be the prescriptive salve for a year that seemed to challenge basic hopes, science and with a result that was chaotic on so many fundamental levels.

The Midnight Sky is definitely two movies in one, feeling like separate stories that work in parallel if not always seamlessly – the first shift between them feels extreme… we’ve just got used to the solitude of the icy Arctic when we head into space…though the stories are designed to converge as the tale proceeds. It’s now well known that Felicity Jones’ pregnancy was written in to the story after she was cast and yet it seems quite organic an addition, with the film being so much about aspects of the human condition. Jones, David Oyelowo, Kyle Chandler, Demián Bichir and Tiffany Boone make a good interstellar team aboard the Aether, rising just a little above traditional stereotypes to be individuals with their own personalities, working together well rather than a dysfunctional unit we often get.   Given that the film is set only thirty years ahead, adding to the emphasis of the urgency of climate-related issues, the leaps in technology on show do seem something of a stretch, pretty to see and useful but probably still too dynamic to be believable that soon. However, the hands-on logistics, especially the repairs-sequence outside the craft’s shell bring to mind the likes of Gravity (another Clooney touchstone) and you ultimately go with the flow.

Actor/Director/Campaigner Clooney is the pivot of it all and is as excellent as ever in all capacities, dropping some serious weight for the role and appearing more like a cross between a tired David Letterman and a pissed-off Santa. He’s now an assured hand at the helm and manages to bring the human factor to the equally-sterile Earth-bound and space-station settings.  Caoilinn Springall, hopefully not getting paid by the word, has an expressive face as Iris and it’s easy to see how the visitor would cause cracks would quickly begin to show in Augustine’s more brittle shell. He’s not so much a curmudgeon as singularly-dedicated to his work to the extent he’s grown comfortable with his own company, especially when he knows he’s personally running out of time – but who actually thrives when given a second chance to make a human connection. A scene where the two fight with the garden peas from their meager meal is genuinely delightful. Ethan Peck (recently seen as Spock in Star Trek: Discovery‘s second season) makes a believable young Augustine/Clooney, though initially the flashbacks seem surplus to requirements but are more important as they continue.

The nature of the catastrophic atmospheric event that renders earth’s surface uninhabitable is never really spelled out in detail – some long-distance visuals and brief scientific notes are vague enough to be the maguffin of the piece, though it does appear that it’s sudden and man-made. There are hints it could be radiation-linked but once the evacuation happens in the opening minutes of the piece, we never hear from the evacuees again, though one line suggests they went far underground. (The film was shot in Iceland and real conditions echoed the changes in climate and the instability of the ice).

The Midnight Sky is worth watching – the talent on-screen and behind it make it an experience that won’t feel like a waste of time, but with the possible exception of a nerve-wracking space-walk and a tense disintegrating ice-shelf escape neither will have it have the result of  punching the air in excitement either. It might have had more visual impact if released, as originally planned, at the multiplexes, but a decent-enough wide-screen tv should help. It’s all just little too familiar and derivative, paying quality homage to the best and with the best of intentions – but like the ice-sheet, there are cracks in the logic that grow wider and more obvious the more you think about them.  It’s the kind of film you’ll go with in the moment for the sake of it and in the spirit intended, but find the obvious faults with thereafter.

In some ways, it’s a parable disguised as science fiction/fact and in that sense it is an ideal Christmas movie… the idea that however cold and bleak the world might get outside, there’s always some way to find warmth.

And this time it’s not John Carpenter’s The Thing.

The Midnight Sky is now showing on Netflix… 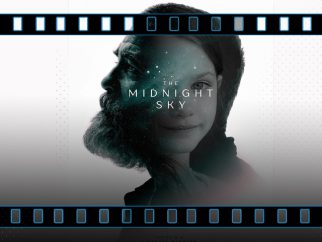