Discovery's crew seek the origin of the star-spanning 'Burn'... but it may be more or less than they bargained for...

Discovery heads to investigate the cause of the Burn, though the ship they’re looking for remains at the heart of a turbulent nebula that is going to make access incredibly dangerous. Saru, Culber and Burnham find a way to beam down, knowing that they’ll have limited time until the radiation starts to reach dangerous, even fatal levels.

But getting to the ship is one thing – what they find there will cause further problems. There is indeed one survivor, but cocooned against the outside world by the holographic processors still operating, Su-Kal cannot possibly conceive the idea of an outside world. The team must find a way to reassure him, even as his fears become manifest and the possible source of the original Burn is revealed.

And if that wasn’t dangerous enough, the Emerald Chain launches an attack against the Discovery in a bid to claim its spore drive…

We’re back to the ‘Burn’ aspects of Discovery’s season but it’s hard to know what to make of the episode’s revelation in what seems like an incomplete story. The idea that the mysterious Burn that blew up warp-driven vessels across the known galaxy in an instant was caused by an all-powerful wave of emotion by a petulant child (Su’Kal) who just happens to have in/conveniently adapted to his Dilithium-rich environment by gaining universe-warping powers, seems like a fantastical  reach, even for a sf show like Discovery (though one has to remember it’s only been a week since a cosmic time-travelling entity removed Michelle Yeoh from the equation, so we may be grading on a curve….) . Perhaps, just perhaps, this would work better as a story-element dictated over thousands of years of awkward evolution, but the story would seemingly have us believe that this is the son of the original Kelpien captain whose only obstacles were being born on the trapped ship and then spending much of his ‘adult’ life being taught/coddled by the remaining holographic systems that were trying to instruct him about life in general and appeared to have failed miserably. Trek has a track record of coming across beings with whom communication is difficult but the key to finding the resolution to confrontation, but this seems a bit contrived.

The idea that the main computer system ‘re-images’ the visitors as different species to make Su”kal more comfortable is a fun visual conceit but one that feels like a production joke rather than a necessary plot point. Of course, it’s interesting to see Doug Jones as Saru sans his usual prosthetics and in ‘human’ form, but that change in particular makes absolutely no sense given the explanation for it – surely a Kelpien would be the most reassuring form for a confused member of his species? That’s not the only problem with Saru’s actions – it’s easy to note the emotional complications events will have as he has to juggle his duties as captain and his need to connect with his own race, but there’s no real story-logic to him withholding the fact that he knew from the ship’s distress video that the captain of that ship was pregnant.  All that being said, it’s Jones who carries the main weight of the episode and shows he’s more than capable of doing so.

There’s some ominous dialogue along the way as Culber and Stamets discuss the dangers of the mission though it seems unlikely that the show would kill either of them off  given a) its already done that plot and b) killing off a banner gay relationship on a prominent show would hardly play well. However there’s also a niggling feeling that something could be in the works for Saru/Jones, perhaps departing to mentor Su”kal?  Burnham and Tilly do get a nice scene where the former gives the latter some prompts on how to handle her unlikely promotion.

The Emerald Chain make a timely and inconvenient re-appearance and after much posturing between Osyraa and Tilly, the villains take the Discovery with remarkable ease and lack of real drama, ultimately leaving Burnham and Book both off-planet and off-ship and with nowhere to go (cliffhanger!). It’s a big complication but one that feels too-easily and suddenly accomplished and throws into sharp relief the fact that this is exactly the situation they’ve been warned to avoid and didn’t. It’s hardly going to play well with Discovery’s alliance with the future Federation whatever the resolution.

While there’s definitely a feeling that various season-threads are being drawn together as we head into the final episodes – and the VFX department are earning their money – it’s still hard to know whether the current run – a vast improvement  – will finish on a high or not. 8-Ball says ‘future cloudy, ask again later…‘ 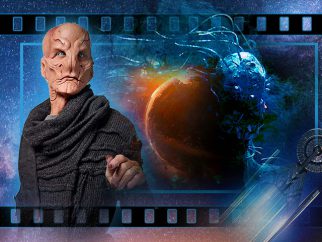