There's impressive ambition in this intense Russian sf epic, but also a lack of consistent tone...

The near future… and a mysterious event blacks out technology across the globe, with the exception of a ‘circle of light’ across part of eastern Europe. The lives of billions are thrown into chaos or perhaps even ended as it becomes impossible to contact anyone outside the circle.  The Russian military isn’t sure whether it is an attack or something else, but it soon becomes clear that there is a very real threat to (and from) the survivors, one that will stretch soldiers, doctors and a handful of humanity to their limits.

But as the origin of the incident is revealed, it will also point not just to the stars but ancient history… and mankind’s survival and place in the universe may depend on acknowledging its past…

There’s no doubt from the opening minutes of The Blackout: Invasion Earth that this is a high-budget sf outing. From the crisp camerawork to the Blade Runner-quality rendering of a futuristic Moscow (and beyond), the film is a clear example of a sometimes over-looked capacity for Russian film-making to actively compete with the western cinema industry for spectacle and scale. In the past we’ve had the likes of Nightwatch, Sputnik, Attraction and Guardians etc and The Blackout: Invasion Earth, despite a somewhat hokey title, is a layered, easy on the eye experience. Not only are proceedings punctuated by the gleaming towers, neon wonderland and desolate enclaves of world-building but some of the specific tech used shows some serious thought going into the how’ as well as the ‘what’ – aircraft look like next-gen vehicles, the medical equipment makes sense and an early use of ’emergency lighting gel’ looks like the kind of things that could be in active development if it’s not already here.

In short it has all the pieces to be epic.

However, tonally and plot-wise, there’s an uneven mix, as if the film wants to say a lot, covering every demographic and base it can… but can’t quite decide where to settle and which characters to prioritise… so it does a bit of everything and all with the same gusto and urgency. You’ll watch the first hour of the film thinking it’s one thing only for a shift as it progresses. Less the all-out  Independence Day, that you first expect from the poster, the story has a tougher trench-level presentation (albeit within the needed sf high-concept / suspension of disbelief) and the inclusion of considered military, theological and social viewpoints make this far harder to categorise as a single-genre entry. Initially it has the besieged feel of Edge of Tomorrow (without the time-travel element), then a kevlar’d Walking Dead (without the circulatory-challenged) and then The Raid (even, later on, with some close-quarter martial arts), but you could certainly point to Stargate, The Arrival and a raft of inferior B-movies as inspiration along the way. Unfortunately, some of that initial impressive world-building, rich for exploration, gives way to more generic material, still astonishingly well-rendered, but far less interesting beyond the immediate peril. After imaginative sequences involving cityscapes, falling planes and a scary, immersive attack by rabid bears, the film settles in for more traditional fare instead of honing in on something new.

Admittedly, it’s interesting to find an apocalyptic drama that doesn’t make the US and its cities the centre of everything. America has ‘saved the world’ at the multiplex so many times that we sometimes take for granted the idea that all significant sf events must involve the West. Here we have a film that simply ignores that premise and sets its events  half a world away with America and Western Europe merely outliers mentioned in passing and the real drama happening in a fully-realised landscape that isn’t as alien as international audiences might expect.

Yes, there’s too many exposition-heavy scenes along the way and the script itself often comes across as simultaneously abstract and stiff, particularly the regular television-studio reports, but some of this could be equally down to the translation effect (we reviewed the dubbed version, though there’s also a subtitle option). The domestic cut for the film (known as Avanpost or ‘Outpost‘) and released a year ago, was closer to two hours and thirty minutes, meaning that there seems to be some considerable material exorcised from the international version. Even with that, it’s slower than western audiences might expect or like, more akin to a mini-series pace that’s been edited down and with a fair amount of detours for the running time. Amidst well-choreographed, carnage-ridden set-pieces, there are many scenes with people just talking rather than fighting… the characters might be familiar archetypes but we end up caring about them and believing in their in-the-trenches peril even when we wish the plot would find its centre.

Ultimately there’s a real sense of ambition from start to finish, one that you simply have to admire on that level, but equally there’s a lack of clear focus and just so many concepts and ideas fighting for prominence that they fail to come together as the sum of the parts and the film lurches from one thing to another as if it had passed through several changing visions and agendas during production. For some films you can observe there’s a good film trying to get out – here there’s several excellent ones but none given quite the space they need and therefore suffer. The finished result may fail to find and satisfy the audiences it’s aiming to target because it spreads its extra-terrestrial net too broadly.

It’s entirely possible to find the film deep and meaningful or utterly silly,  a benchmark production or a missed opportunity… but there’s no denying that flaws and all,  it’s an experience created with an impressive budget and scope and speaks well of Russian cinema’s aspirations…

The Blackout: Invasion Earth will be released in the UK on 28th December on Blu-ray, DVD and VOD on digital platforms… 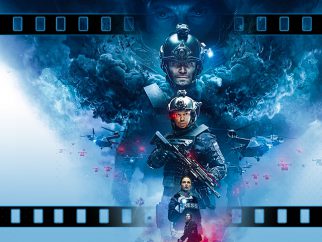