Two decades on, 'The West Wing' still speaks with eloquence and passion to some timeless truths (and voting!)

If all the world’s a stage and all the men and women merely players, then the best productions are the ones that make you forget the stage exists at all and it’s a tribute to the legacy of the seminal Aaron Sorkin show and all involved in this ‘The West Wing: When We All Vote…‘ episode recreation that a stage that is inhabited by those performers alongside a few props and minimalist architecture still feels like a fully realised world. In what could have been  a well-intentioned disaster, everyone rises to full height, bringing their A-game with a air that only seems effortless. With the Sorkin script and direction by oft-West Wing helmer  Thomas Schlamme, the best aspects and techniques of television and stage are combined in a quite amazing partnership of talents

The personal politics of the people on the stage may leave little doubt as to how they’ll vote on 3rd November, but it would be a mistake to dismiss a presentation about the importance of voting in and of itself as partisan. Hartsfield’s Landing was a third season episode of The West Wing that innately spoke to the importance of strategy, of knowing the bigger picture, of accepting individual’s different strengths, weaknesses and priorities… so anyone dismissing this 2020 recreation as partisan propaganda for the Left arm of politics does themselves no favours. Sorkin’s version of politics is sometimes verbose and grandiose, wish-fulfilment and sometimes self-serving but it speaks to higher values that all could largely agree on. The era depicted is years (it seems centuries) before the current fractured landscape with no hint of smart-phones, facebook or twitter and even the intermissions, with no less guest-players than Michelle Obama, Bill Clinton, Samuel L. Jackson, Marlee Matlin and Hamilton‘s Lin-Manuel Miranda are less about them pushing you to where you put your ballot paper and more to making sure your vote is counted in an age where allegations of suppression are high.

Yes, some actors have clearly aged in the years since, though largely done so gracefully. Others such as Janelle Maloney  (as Donna Moss) and Richard Schiff (as Toby Zeigler) look so unchanged that they most likely have portraits in their attic kept under lock and key. All the cast, slide back into the personas that they made their own and for die-hard fans of the original, it’s a welcome breath of both fresh and nostalgic air and a reminder of how lyrical television can be when it simply tries hard enough. Of course, The West Wing sadly lost John Spencer’s Leo late in its run due to his untimely death and here the essential part is taken by Sterling K. Brown. Though Dule Hill ribs him about being ‘adequate’ during one of the breaks (and though Spencer is also sorely missed), Brown rises to the unenviable challenge and instead of imitation gives his own spin of the stalwart character, which ultimately fits in well).

It’s somewhat a shame that the special is only available legitimately on HBO Max. It’s a quality service but a premium one and this platform alone probably won’t be enough to make as many people sign-up, even huge West Wing fans. It can’t expect to get the viewing figures a network could have managed (imagining this on NBC in primetime is a thing of beauty) and if the reason is to get people out to vote, that bigger audience would be preferable. However that’s simply a business-model (The West Wing will head to HBO after its current Netflix home runs out) and you go with what you have and the stage provided for it.

Twenty years on, politics like this remain wish-fulfilment, but there is still some astoundingly astute dialogue amongst the meandering Bartlett anecdotes,  powerful punchlines and prat-falls that warm the heart and remind you that the secret of drama, comedy and politics is always… timing.  I always felt smarter and more inspired after watching The West Wing. One of the best gifts I ever received was from my dad who suggested to my mum the complete box-set would make a good convalescence gift after a hand-brake medical incident in 2008. It’s a show that inspires and impresses and I always felt smarter for having watched it. Time hasn’t changed that, indeed, it’s crystalised those qualities. So the music (the intro is played by no less that the original composer W.G. Snuffy Walden) and the words that follow that electrify the hairs on your skin and leave the indelible mark they should. 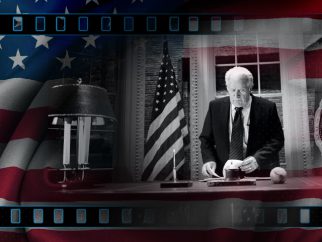