'Zombieland', but with uncanny undergrowth - a largely family-friendly take on the apocalypse...

Over a decade ago, a falling meteorite led to a rapid mutation of many creatures on the Earth’s surface. Now even crabs, frogs, snails could prove perilous if you cross their path. That’s the reason that survivors live underground and only venture out when they have to.

On the day of the apocalypse, Joel’s family were killed and he was separated from his first real girlfriend, Aimee. Joel now resides in a bunker where everyone else has matched up. Unable to overcome his PTSD when any monster breeches the bunker defenses , he often freezes in the face of danger and his role is largely reduced to the bunker’s resident tech-guy and chef.  He has managed to locate Aimee and they speak by the intermittent ham-radio, but he’s weary of his isolation.

Joel decides he must venture above and seizes the opportunity to make the journey to Aimee’s base, but is he remotely prepared for the monsters and people who will cross his path?

Love and Monsters is an enjoyable romp through the post-apocalypse and mostly suitable for family viewing. A possibly timely exercise in staying-put and not venturing out into danger, its biggest problem is that while perfectly fun in a pixel-pounding, self-deprecating way, it can’t quite settle on what it wants to be. One minute it’s a bug-eyed version of Zombieland (and that’s certainly the way the marketing leaned, a little misleadingly), the next there are nods to Tremors (underground, tunneling beasties), I am Legend ( a man and his dog walking around the apocalypse) and  even Stand By Me (both the original song and and the classic film’s uncomfortable encounter with leeches). As it meanders between encounters and homages, it never seems confident enough in its own more unique material to settle on one and go with it for more than one act. The result is a story that has some pacing issues and frustratingly never rises to fulfil its potential.

Dylan O’Brien (Teen Wolf, The Maze Runner) makes a good hapless hero in a classic story of ‘zero to hero’ and overcoming ones fears. In a raft of post-apocalypse productions, we often get the brave warrior type and Joel is probably more like the real ‘us’, the ones that might well have no real clue how to deal with fantastical obstacles and simply muddles through. The grizzled Michael Rooker (of The Walking Dead and Guardians of the Galaxy fame) was marketed centre-stage, seemingly indicating he had a Woody Harrelson-like role in proceedings, but the encounter between Dylan’s Joel and Ariana Greenblatt (the young Gamora in Avengers: Infinity War) as ‘Minnow’  (think a post-apocalypse Hit Girl) who is travelling alongside Rooker’s Clyde, is annoying cut short, resembling a snarky but effective bullet-point where you remain convinced they’ll reappear as part of the plot (and except for an epilogue, they don’t, which is a shame). There’s a different movie there that might have been better.

Equally, the romance between O’Brien’s Joel and Jessica Henwick as Aimee at the core of the story, plays out to likely expectations, but allows Joel to be tried and tested. Henwick plays a younger role than her Colleen Wing character in Iron Fist)but manages to pull off that mixture of youthful exuberance and battle-tested responsibility.  However the audience may be left with that niggling feeling that while Joel’s slow transformation from PTSD-survivor freezing in the face of danger to more self-confident to action-hero is fine, his late-in-the-day appreciation by others (who’ve previously taken his inaction for cowardice or apathy and therefore also taken him for granted) is received with with way more gratitude from Joel than they probably deserve. In short, he deserves more sympathy and better friends.

The creature effects, a major selling-point for the enterprise, are fun… a sense of genuine lolloping danger rather than outright terror -as if Pixar were tasked with the job of The Walking Dead‘s version of Animal Planet. It might not quite work for youngest audiences, but should work well for kids of any other age, including adults. And running at less than two hours, it’s all a brisk, if chaotic run, an assortment of set-pieces that don’t over-stay their welcome but obviously indicate a sequel wouldn’t be out of the question… 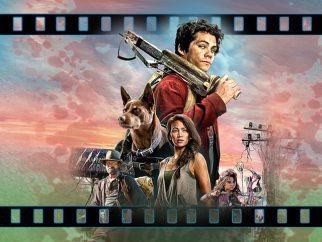