Just renewed for a fourth season, is this week's third season opener a game-changer for the Trek series or not?

After saving the galaxy from a massive, temporal AI threat, an armoured Michael Burnham and the Discovery have been propelled through a wormhole and flung far into the future. Still separated from her ship and crew, Burnham crash-lands on a desolate planet, or more accurately crashes into a ship owned by a man called Book. To be entirely accurate this may not even be Book’s legal ship or cargo, but with both he and Burnham now forming an uneasy alliance, the question is if either should fully trust the other?

After much physical and verbal conflict, it appears they may have no choice to combine the few resources they have. But in this future galaxy so much has already been lost to history and myth. Where is the Federation? What has happened to warp-drives? And did the Discovery even make it through?

In both literal and narrative sense, there’s something of an unapologetic course-correction for the start of Discovery‘s third run: a statement of intent and essentially placing Discovery‘s cast in the future rather than being the prisoners of arms-length continuity they’ve been to date. The first season of Discovery was interesting but ultimately went through a Mirror Universe far too darkly and was a little too pleased for introducing ‘fuck’ to the Trek tv galaxy.  The second found an uneasy balance between continued angst and the (re)introduction of original tv elements such as the Enterprise, Christopher Pike (Anson Mount) and Ethan Peck as Spock. The angst still didn’t feel right and the latter classic couple were so good they threatened to eclipse the main cast (and are now destined for their own spin-off).  Going into the third… well, who knows? It’s hard therefore to judge the show based on one new singular entry, rather than by the greater barometer of what it does now those chains are off.

Blank canvasses are both fun and intimidating. There’s always that innate danger in wiping slates clean that said slate needs repainting and the show wastes no time in putting down some future-past markers, one ominously described as ‘The Burn’ and the other an anti-time-travel directive (because, sure… that’s going stick) which feel ripe for the show to investigate more thoroughly. Yet how ‘different’ the show will be may need to be far more than a cosmetic move. Just how different is this future in reality, bar the rise in anarchy and the banishment of warp-drives? There’s hints that Burnham wants to learn the specifics of said cosmic events (with a hint she wants to somehow go back and prevent them) but that’s going to prove a writers room / production dilemma… if Discovery does well in the future-setting, would it really take the risk of heading back along the timeline to less lucrative pastures and if it doesn’t just where do you take that fourth season?

But let’s not get ahead of ourselves. That Hope is You (Part One)  is the needed scene-setter as Michael crash lands far into the future. Essentially a fairly minimalist story stretched to fill the time with showcase graphics and a ‘previously on…‘ motif that echoes through the hour while simultaneously musing ‘what now and where next?’, the return of Discovery boasts a certain new confidence and style that it will still have to keep earning going forward. The talk of is how the wanderers will recreate the optimistic, altruistic ideals of the long-lost Federation, but the journey will be as important as the destination. The look of the show, even one that was already shiny, now looks cleaner and more expansive. The planet-side scenes themselves, largely filmed in Iceland, are suitably desolate and give a real sense to Burnham’s feelings of loss and being lost. The trading-post hub has another  shiny ‘Vegas-in-space’ type atmosphere which feels like a Washowskis’ shiny take on Mos Eisley sensibilities. If it doesn’t feel particularly original, it’s well-enough rendered with plenty of prosthetics, CGI and choreography to fill the time. But again, this could be new wallpaper, rather than a new blueprint and the next episodes should decide which.

Those who sometimes grow a little weary of  Michael Burnham (Sonequa Martin-Green) and those moist-eyed rallying-cry speeches may not find much solace here as she’s the only member of the Discovery crew on show in this first episode and she has plenty to be emotional and talk about. That being said, she has some laughs at her own expense when a truth-serum she’s given basically sends all of Burnham’s emotions into abstract overdrive and she starts psychoanalyzing herself to comedic effect. A cosmic wanderer balancing pragmatic need and karmic philosophy and named Book feels like a long-distance handshake to the late Ron Glass in Firefly, though this is a different character in practise. David Ajala’s performance starts off as a self-serving Han Solo-type rogue but eventually becomes an anthropological conservationist which feels a little contrived but at least adds some layers to a familiar trope that will also be worth exploring. He and Burnham have an obvious chemistry that will likely move from contempt and distrust to the opposite as things progress, but the dynamic works well so far. Book’s cat, going by the excellently-suitable moniker of ‘Grudge’ is no Baby Yoda but one suspects he might have a following by the time we’re done.

All in all, it may not be enough to win back all the people who have shrugged a little at Star Trek: Discovery to date, but it may well build on the party faithful who’ve been along for the ride so far and give them some reinvigoration of their prime directives.  Season Three is off to a decent start, but how boldly it will go from here will be the real test.

Star Trek: Discovery Season Three has episodes released weekly on CBS All Access in the US and on Netflix in other territories. Season Four begins filming in November. 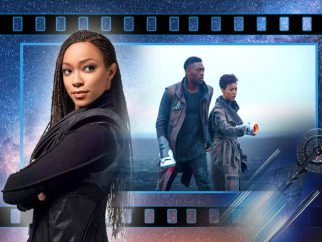