It's a case of green-baize-moi in 'Break', as an underdog faces his crucible and a way out of trouble...

Spencer Pryde (Sam Gittins) is a low-level criminal, acting as a runner of A-levels drugs more out of boredom than for the extra money it brings in to his cash-strapped adolescence. Near-misses and a few fatalities amongst his friends don’t deter him as he has few other choices.

The one thing that he does find pride in is his snooker skills – something of a prodigy, hitting centuries or more by the age of thirteen. When his absentee father gets out of prison seeking to help his son get out of a downward spiral and give him a chance to learn from a professional mentor, Vincent Qiang (David Yip), Spencer initially resists out of pride and spite. However, with ever limiting options and debt, the lure of ultimately qualifying a match in far away Beijing has its appeal as a way to pay off the people he owes.

But there are also those with a vested interest in keeping him right where he is and as he struggles to find a way to navigate his dwindling choices, Spencer may find out he’s his own worst enemy…

The story of a guy finding a sporting talent to lift him out of his circumstances is hardly a new one. From This Sporting Life to Rocky to When Saturday Comes, they have all pitched the tale of the underdog defying the odds and social obstacles and confronting inner demons. Break joins that league in a familiar but promising way, transferring the earnest need from the traditional field or ring to the green baize table of snooker.

Feeling like a Taron Egerton contemporary with young Ewan McGregor self-assurance and even younger Sean Bean defiance, Sam Gittins – who has been quietly making a name for himself over the last decade – does well as Spencer, coming across as a punk-ass Stephen Hendry, a young man lost and only finding satisfaction when he picks up a cue. Veteran British actor David Yip is good as Vincent Chang, a pool hustler who knows more about snooker than he first appears and teaches Spencer Pryde some early lessons in humility – think of him as a green-baise Mr Myiagai with cues instead of chopsticks. Luke Mably (who made an impact in tv’s Dream Team and then on the big screen opposite Julia Stiles in 2004’s  The Prince and Me) and Terri Dwyer (who began her career in the early days of Hollyoaks and shares a producing credit here) play older, if not wiser characters as Spencer’s estranged parents.

Break would also turn out to be screen veteran Rutger Hauer’s penultimate film and though it’s a long way from the likes of Blade Runner, The Hitcher and the raft of genre favourites, even in frailer form he still brings an imposing screen presence. It does feel like an extended cameo, which is a pity because his character could have been expanded out to play a bigger part in the story and clarify some of his motivations… and several other characters including Anna Danshina as a widow wanting justice for Spencer’s murdered friend hint at a longer cut.

Familiar London council-estates and darkened alley-ways form the backbone of the main story, though we eventually make it further afield. Some of the later Beijing set scenes are shot on location, though it’s clear that most of the interiors are UK-bound, so snooker-stars Ken Doherty, Jack Lisowski, Liang Wenbo and Rob Walker don’t have to travel too far for their own cameos, placed there for die-hard fans of the sport)

COVID has played unprecedented havoc with major film releases throughout the summer – with no real end in sight  – but it may actually have played to Break‘s benefit. Ultimately the film feels like it  knows its social cues rather than its snooker cues and the result is more of a confidently-strutting tv movie with sometimes uneven pacing than a full-on cinematic release competing with big-budgets and broader star-power. It’s not The Color of Money or The Hustler and one complaint is that it does rely a little too much on its wide-boy remit at the expense of cranking up any specific green-baize tension until its final act (and there are moments when you feel any other sport could have been substituted to make the same exit-strategy point with little alteration to the rest of the piece).

But what it may lack in honed script and originality,  it makes up for with touches of genuine heart and earnest.  The decision to showcase it as a drive-in experience in a set of social-distanced carefully-regulated events in late August could work well for word-of-mouth and increase its ‘independent’ status.

“Being an independent film, we were hugely affected by Covid-19,” says Dwyer. “We didn’t know when or where we could release our film. After 10 years of hard work we wanted to give the film a premiere it deserved. We thought an open-air drive-in would be the perfect place to host our event and would be the springboard to roll out the film nationwide, with safe and secure procedures in place.” 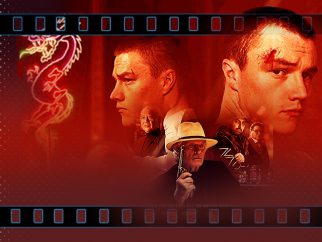