Lower your expectations and the animated Trek 'Lower Decks' delivers a self-reverential raft of in-jokes...

Ensign Boimier (Dan Quaid) dreams of one day making it to the rank of Captain aboard a starship, but for now he’s stuck on the lower decks of the U.S.S. Cerritos and determined to show everyone he can follow rules to the letter. That doesn’t always endear him to fellow ensigns such as Mariner (Tawny Newsome) who enjoys flouting the rules just to annoy him, the cybernetically-enhanced Rutherford (Eugene Cordero) whose obsession with tech often gets in the way of dating and newcomer Ensign Tendi (Noel Wells)  who is just thrilled to be the latest recruit.  Together they are the sort of misfits that are rarely given huge responsibilities and who are more often not given the jobs the bridge crew would like to avoid.

But on a ‘second contact’ mission, to further establish the more pedestrian protocols with a newly-discovered planet’s population, they may inadvertently have the solution to a crisis. When a ‘rage-virus’ turns many of the Cerritos crew into cannibalistic zombies, it’s up to Boimier, Mariner and Co to muddle through and find a way out… even if involves been suckled by a spider?

In recent times Trek has had a resurgence… and with plenty of new shows within its universe set for appearances over the next eighteen months, it’s the animated Lower Decks (new to the CBS All Access platform) that becomes the opening salvo.

Largely dispensing with the more solemn, serious take at the heart of Discovery and Picard, this is the kind of show that is absolutely not part of canon, though you’ll hear it roar throughout. But even if it slides into one-liners at every turn, the show is clearly made by those who love Trek and the prat-fall lampooning of its format and history is done with the same affection of the source-material as those who made Galaxy Quest, though here with more opportunistic zest than clever melancholy. And, bluntly, Lower Decks might be a little too zany for its own good – its slapstick snark travelling at light-speed and with the momentum of an atom on its third cup of coffee, particularly when Tawny Newsom’s Ensign Mariner is in full flow. (All her lines are delivered with a ‘louder must be funnier’ remit and ultimately about half of them work).

Amid the humour there’s some attempt to give a little bit of edge to things. By the time we’ve played out the pilot episode, pitched well at just under 30 minutes, we know that there’s a secret family connection being kept under-wraps and that there’s an almost malicious complacency in the bridge crew claiming sole credit for the efforts of its lower ranks – especially by the ‘Number One’ like, Ransom (Jerry O’Connell).  It’s a Rik and Mortyesque experience (not surprising as Mike McMahan is at the helm) though one that’s knowing and self-referential but never quite as subversive as it thinks it is or could be with a little more daring. But there’s no mistaking it’s all here to make us smirk and feel a little smug when we catch the references.

There are almost too many nods to franchise mythology to mention, some in the characters’ conversational anecdotes and others in background animation and just enough to make you wonder if it would still work without them. The idea of ‘Second Contact’ being almost as difficult and complex as ‘First Contact’ (albeit in a ‘let’s do the paperwork and not screw up galactic relations‘ way rather than ‘OMG! Aliens are real!!!!‘ shock and awe) is ripe for exploring and exploiting. In this case it leads to a ship-wide outbreak of rage-zombies that stays just the right side of squeamish but fully embraces The Walking Dead in a way that might have you wishing you’d seen a live-action version of the concept.

Certainly there’s more laughs in one episode of Lower Decks than there’s been in several seasons of Red Dwarf and there’s every chance that while there’s not enough here as yet – other than that nostalgia – to guarantee cult status, it proves a decent enough guilty pleasure for a generational warp down memory lane and will be worth keeping an eye on to see if its voyages of discovery show further enterprise. 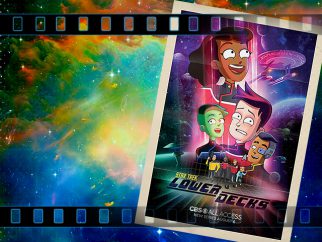 COVID-19: Is Mulan’s move to Disney+ a game-changer?