Talmudic ass-kicking and Tarantino-flavouring - 'Hunters' is interesting but controversial viewing...

It’s New York, circa 1977: Jonah Heidelbaum (Logan Lerman) lives with his grandmother Ruth (Jeannie Berlin) and though he respects the Jewish religion they both share, he finds himself more concerned with simply surviving the everyday pressures of  wanting to financially-support the household and avoiding the police and thugs when he’s doing a spot of petty drug-dealing. But when his grandmother is murdered in their home – by someone she clearly recognises – Jonah blames himself for not acting quick enough to save her. An old friend of Ruth, the enigmatic Meyer Offerman (Al Pacino) offers his support and words of wisdom, but Jonah wants to make the culprit pay for himself.

With the police making little progress, Jonah resorts to desperate measures… but he has no idea the dangers into which he is venturing, the scale of a conspiracy that reaches back decades and the ruthlessness of those seeking to change the defeats and fortunes of the past in an effort to move forward.

Jonah’s next decisions could be a matter of life and death on a historic scale..

Hunters, the newest drama for Amazon Prime customers, is a peculiar beast:  a story about retribution, revenge, sadism, genocide and family… but one tying it all together with a dark sense of humour perhaps best encapsulated by the Yiddish term ‘bitterer gelekhter‘ or ‘laughing through tears’. As the poster for the show indicates, there’s more than a large debt in style owed to Quentin Tarantino – aspects of his infamous pace and flippancy; the prestige selling, the nods towards pop-cultural touchstones and a soundtrack that offers a period-drama pentameter but – in this case – with something far more profound than simple lip-service the cause.

There’s an avalanche of 70s pop-culture references, from the Farrah Fawcett TV Guides, the dissecting of Star Wars villainy to a ranking of superheroes and the moment when Jonah Heidelbaum (Logan Lerman) enters the home of Meyer Offerman (Al Pacino) and says he knew the old man was rich “but not Bruce Wayne rich“. And in many ways this does indeed feel like the entry-point origin story for a group of erstwhile gumshoe superheroes… the X-Mensch if you must, with Heidelbaum a more sullen, narcotic-friendly Kitty Pryde and Pacino as a more hirsute Professor X. (True, they don’t have mutant abilities – though Heidelbaum has an uncanny ability in spotting clues and connective tissue and we really only meet the rest of the garish ‘gang’ in the closing seconds – but this is definitely a heightened origin story or sorts).

And therein lies the major stumbling block. Undoubtedly, the mixture is a positive tinderbox of potential recriminations. It certainly won’t be for everyone, but the lightness of touch that comes within arm’s reach of the darkest of matters is something of a trademark of executive producer Jordan Peele who frequently enjoys peeling the band-aids away from scars and telling a joke while he does so. The series, to be clear, isn’t making fun of the Holocaust in any way shape or form, but the grand guignol aspect married to the grotesques of aging Nazis is exaggerated enough for shuffling-in-your-seat entertainment value that it is in danger of losing some of the innate horror that already exists and might have been enough without the OTT flourishes.

This is Pacino’s first full television series and in the early stages at least, the veteran stays away from the ‘shouty, angry’ roles that have often formed the punctuation of his long career in favour of the more enigmatic, irrascible and bewhiskered mentor role. It’s easy to see why he was tempted by a multi-layered role that both embraces and subverts some of the stereotypes on which it passes comment. Lerman’s Heidelbaum also walks a careful line, questioning his faith while honouring it and searching for answers through and beyond its pages.  Initially events are so steeped in Jewish culture that those of alternative faith might feel they are facing a tsunami of shekels and a mountain of mina and there’s no denying that its subject-matter means that a deep-dive into certain beliefs and mantras is going to be useful… but once some of the pillar are established it’s quickly  as much about character as culture and hunters embraces both the sacred and profane in its journey.

Supporting players such as Lena Olin, Greg Austin, Dylan Baker and Jerrika Hinton (as a high-ranking Nazi, a hitman, a murderous suburban heavyweight and a determined FBI agent respectively) make some immediate impact, which is interesting to watch. However, the likes of team-members Carol Kane, Saul Rubinek, Josh Radnor, Tiffany Boone and Kate Mulvany barely make a mark in the pilot but will likely come forward better thereafter.

Sharply scripted and shot, Hunters boasts a slow-burn set-up that will keep you watching, but it feels more like a compelling idea on paper than the zealous achtung-action result on screen.  Its claim that it is inspired by a true story also feels dangerously disingenuous: the Holocaust atrocities were already horrifying on a genocidal level and the hunt for veteran Nazis surviving and thriving in the West years after WWII, has real-life historical examples, but some of the shock-sequences of Nazi nihilism shown here feel more like sweat-palmed Eli Roth set-pieces that are there to revel rather than recoil.

Still, the series, now streaming on the multimedia platform, has enough style, wit, intrigue and talent to keep going for the moment… but can it sustain the run entire 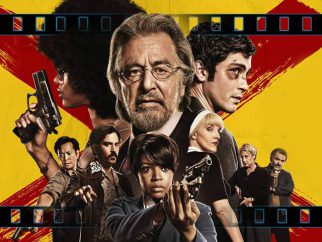