Borg to Run - Chris Chibnall cranks up the speed and scale for the start of the current 'Doctor Who' finale...

Given the earnest warning from Captain Jack Harkness (John Barrowman) and the contempt of  Ashad, the Lone Cybermen (Patrick O’Kane) at Villa Diodati, the Doctor and her companions head into the far future and the last days of the great Cyber War to see if they can undo the damage that the Doctor’s decision has wraught.

But the Doctor may be far too late – for humanity and for herself. Because in an effort to do the right thing, she has placed her ‘fam’ in deadly peril and at the very edge of the universe she is about to face her own past and future in the most unexpected way…

In the distant future, at the obligatory edge of the universe, the Doctor and her fam arrive to assist the last few human survivors of a war that has seen devastating losses for both the Cybermen and humanity. That they arrive after the massacre, that their equipment fails to pass any muster whatsoever and that they’ve left the Tardis conveniently off camera – and, for some reason, unreachable – somewhat dilutes the ‘help’ they promise. Separated from the others, Graham and Yaz find themselves aboard a dilapidated shuttle with what’s left of the survivors’ group. Julie Graham’s determined and sardonic Ravio is the most interesting of them, even taking time to flirt with Graham  –  but once again there are more characters who are surplus to requirement…be honest, did you even remember the names of the other two – Alex Austin’s Yedlarmi and Rihannon Clements’ Bescot ?)  There’s  just enough resources to get them off-world but likely a very cold and lingering death as the power begins to fail. They manage to navigate into the debris-field and have a ‘Hail Mary!‘ docking sequence with a seemingly abandoned fleet-carrier that proves to still have some very dangerous cargo.

The Doctor, Ryan and survivor Ethan (Matt Carver) have slightly better luck, hijacking a far superior Cyber-craft and speeding past their counterparts, though Ashad still manages to sneer at them via virtual projection as they head towards a legendary gateway out of the universe.  ‘Ko Sharmus’ – be it the place or the man they find there – ultimately feels and looks a lot like Old Luke Skywalker and his Last Jedi island retreat and seems a useful, if conveniently abstract way to join up the current part of the story with our long-promised Gallifreyan component (absent from the action so far, but which we knew was coming). At this point it’s all very mysterious and abstract and Chibnall clearly relishes the fact he has time to build the mystery while not really having to explain most of it for another week.

The third factor is the most obscure and seemingly disconnected. In what appears to be early 20th Century rural Ireland (or a stereotypical facsimile thereof) we have our own version of Clark Kent, a mysterious baby given the name Brendan (later played by Evan McCabe) and who grows up to support truth, justice and the Gaelic way. He joins the local Garda and even more mysteriously ends up not dying when he’s shot and plunges from the top of a cliff onto the beach-head below during a chase. That would be good news, accept that his survival seems to unnerve some of the locals and even, years later, when he retires as an old man, there’s some inexplicable familial faces that return to strap him down. There’s several intriguing elements here, beyond the obviously strange reappearance of his adoptive father and friend: the almost cyber-head/chameleon-arch to which they attach him, a prominent time-piece that is often used to have some connection to the Time Lords and the thief Brendan was chasing also looks similar to the face under the Lone Cyberman’s helmet.  Whether these are coincidences, deftly-placed imagery or have any other hell-bent significance time will, literally, tell, but we’re still betting on the whole scenario being almost virtual).

Narrative-wise it’s all very interesting if fast-paced. A little like the first episode of the current run, this is an episode that’s mostly set-up and momentum: a lot of interesting questions, more casual collateral damage and the promise of great stakes to come. It’s built around those three locations and splits up the team for solid reasons with the liberty of two-part pacing, which helps. Again echoing Spyfall, it’s the late entrance of The Master  – with full-on cackling maniacal flourishes that you’ll love or hate –  that nearly tips the real sense of dread and ‘How do they get out of that?‘ cliffhanger into pantomime territory. That being said, it’s now entirely clear that Chibnall intends to bookend the season with massive spectacle and rug-pulling. As both the start of a finale and as a Cyberman story there’s much to like. After the loss of previous companion Bill Potts (who the Doctor still presumes is dead rather than ‘puddled’) the Doctor takes Cyber-bullying particularly personally and it appears her silver nemeses could be more of a primary foe to this incarnation than the Daleks (though the Skaro pepperpots seem to be next-in-line for Christmas, can’t a Time-Lord get some respite from metal monsters?)

Technically: The FX on the episode are of various quality between truly wonderful, very good and just sloppy. The cold-open (inexplicably missing from most of this season’s episodes and now with a sinister, portentious monologue which helps) moves us through cosmic debris and in on the dead eye-piece of a broken cyber-head that, in turn, plunges into the opening credits… it’s inspired and effective (not quite the ‘Centurion’/Rory monologue and pay-off, but it promises as much).  However only a few minutes later we’re standing in the ruins of a future planet and the massive Saturn-like ringed planet in the sky above inexplicably disappears between various shots as if it was simply forgotten. In wouldn’t be the first planet Who has lost in its time, but in this case it merely seems like lack of attention to detail. In between we have impressive composites of a cyber-army and some physics-defying exteriors of starships and shuttles which work well but are best when glimpsed rather than studied.

This is definitely a step-up and a stride-forward for Doctor Who in its current form – for once an interesting mix of RTD and Moffat styles, certainly not perfect but better balanced than it has been and a solid tribute to the legacy of the Cybermen threat. Yes,  it’s largely a ‘pursuit’ instalment and there are overt Borgian similarities that can’t be ignored, but Ashad’s vitriol and zeal – powered by his own inadequate ‘upgrade’ – make an interesting addition as a leader of an unfeeling army.  The Daleks have their Davros, why shouldn’t the Cybermen finally get an icon as well?

Judged in its own right it’s a solid chapter – but one that may have to be re-evaluated, for better or worse, in the wake of next week’s conclusion and we’ll see how well it continues to play that hand… 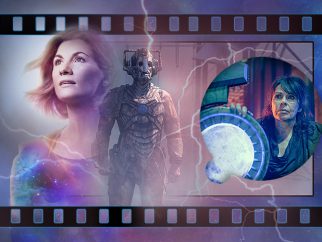