In the fifth of ten, Seven of Nine is back - but, however dramatic, what would Gene Roddenberry make of it all?

Picard (Patrick Stewart) and the crew of the La Sirena arrive at Freecloud , a neon-hued, elitist  hive of scum and villainy that caters for all tastes as long as you have cold, hard credits. It’s here that Bruce Maddox (John Ales), the man who created Dahj and Soji was last seen… and it turns out he’s crossed some of the wrong people. There’s little chance Picard will be able to get close to Maddox and his captor unless he has something to offer in return. The newly-arrived Seven of Nine (Jeri Ryan) suggests offering herself in exchange in a subterfuge that’s audacious, dangerous and not a sight for sore eyes.

But it soon becomes clear that almost everyone involved has a secondary agenda and reasons for coming to Freecloud – many of them highly personal – and that they might not all align to anyone’s benefit… but how far will people go to protect their investments, their secrets and to set right their past?

A Guardians of the Galaxy meets Firefly remit with a budget somewhere in between, Stardust City Rag is an episode that runs the whole gamut of styles: silly, earnest, horrifying, dark and frivolous: an effective kiss-me-quick cocktail with both a serious kick to it and a ridiculous umbrella for effect.  The outrageously silly costumes that are worn ‘to blend in’ serve no real purpose except to provide a laugh (which they do, albeit a limited one) and it’s actually Elnor’s straight-faced confusion at the various flamboyant deceptions that works best… that and his palpable realisation and disappointment that he’s the only interstellar traveller not getting cosmic spam pop-ups.

But before the silliness and the later soul-searching is the horror aspect. The episode starts with perhaps Trek‘s most gruesome scene ever, one that might well put it into ‘R’ rated territory on the big screen. We watch a man’s eye being extracted without proper tools or anaesthetic, with all the sinew and blood you’d expect from such a vivisection. Okay, so it’s an electronic-implant eye – belonging to a recast Icheb, a character we last saw deBorgified in an episode of Voyager –  but the screams are still pretty convincing. It’s a scene that goes beyond just uncomfortable into the realms of actually being unnecessary in its explicit execution.  It’s perhaps an over-played statement of intent that this isn’t your grandad’s Next Generation that might have worked just as well or better with inference rather than the eye-popping attention to detail. (With previous profanity and now torture, both arguably too front-and-centre, one wonders if nudity is around the corner?)

In that regard Necar Zadegan as the almost-unfortunately named Bjayzl (misheard until I checked the spelling) doesn’t quite pull off a ‘Servalan’ with her cool, heartless power-dressing, powermonger role. It’s a part that requires sheer intimidating presence and it isn’t quite there, though the script and the sleek fashion give it the old college try. After several weeks of much name-dropping, scientist Bruce Maddox (now played by John Ales), unfortunately, turns out to be an expendable maguffin, essentially a stepping stone simply to direct our fugitives in the direction of the Borg Cube Artefact – though it does lead to an a-ha! moment that validates an ongoing theory about one of the crew. Elsewhere the real reason for Raffi (Michelle Hurd) being on Freecloud becomes apparent when she tracks down her son… whom she abandoned years earlier. Unfortunately things don’t go well and the olive branch she’s delivering wilts under possibly reasonable recriminations. It’s an element to Raffi that makes her very human, Hurd being given the chance to play a far more vulnerable side to her character, while another handles this week’s ‘attitude’ chores – but feels oddly shoved into the already-overflowing mix that ultimately makes it seem under-served and at odds with so many other story-threads getting the spotlight.

But, yes, it’s Jeri Ryan’s Seven of Nine that gets the headlines and she makes the most of what seems to be a one-off guest-spot (discounting her late arrival last week) giving us a grungy, dark,  vengeance-seeker that might have been more of a cliché if it wasn’t just so good to see her back at all. For a character that spent most of Voyager trying to win back her humanity, this episode is largely about the pain that comes with that – and possibly losing it again. Like many of the characters in this series, she’s a product of decisions made over a decade before that came with a massive personal cost – though her method of putting it ‘right’ certainly puts her at odds with Picard. It’s somewhat strange to think that these two pillars (should that be Pillers?) of Trek have never met on-screen before and certainly the episode plays the fact that they seem to be acutely aware of the other’s legacy… not to mention the innate connection they share having both been victims of the Borg and have the rare distinction of living to tell the tale (which is briefly discussed in the episode’s best scene).

Stardust City Rag has many of  the right, entertaining ingredients, lots of easter eggs and some strong talent on board (including Jonathan Frakes returning as director and some stylish, creative editing that went back and forth chronologically, but worked well). But after a majority of episodes moving at a snail’s pace, the opposite becomes true here:  there’s just too many disparate things competing for prominence. It’s almost as if a handful of good ideas had been quickly slammed together into one script whether they fit or not. Equally, the silliness and humour seem there in case we’re starting to think the writers and the Trek universe are getting too depressing or nihilistic… but it actually succeeds in making the darker counterbalances to the fun even more prominent. I mean, let’s be honest: has any character in the show made any good choices in the last decade or ones that aren’t coming back to haunt/kill/maim them?

However… much I’m enjoying it on any number of levels: dramatically, nostalgically and topically…and I certainly am –  one wonders if the late Gene Roddenberry might actually be quietly dismayed by what is arguably the dismantling of his more positive deep space vision for a drama that’s just as engaging but full to the brim with a far more bleak melancholy? 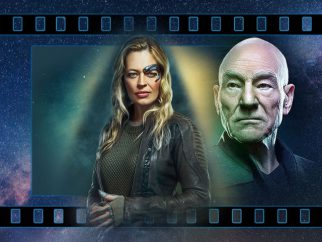