NEW-TV: More than ‘The X-orcist Files’, ‘Evil’ delivers the goods…

Despite it's initial X-File-ish set-up, 'Evil' has an intelligent pilot that asks all the right questions...

Dr. Kristen Bouchard (Katja Herbers of Westworld) balances the everyday job of being an ‘expert scientific witness’ with a willingness to hear opposing viewpoints and challenge them. More often than not, she’s hired to challenge alibis, excuses and motives and she’s very good at analysing deception.  However, she’s more concerned with being thorough and right than being on the winning side.  So when she refuses to continue fully towing a prosecutor’s official line at the trial of an accused multiple-murderer who’s claiming demonic possession (disagreeing on how her findings are presented even if she agrees he’s a human monster rather than an unholy one) there’s a parting of the ways.  It’s a moment of personal integrity, but integrity won’t cover her behind-on-the-payments bank balance nor keep the security of a roof over the heads of herself and her four daughters while her husband is off embracing his inner chakra climbing mountains and being a Sherpa in the Himalayas.

Her commitment to her job and the truth catches the attention of David Acosta (Luke Cage‘s Mike Colter) who works for the Catholic Church and offers her a variation on her last job. He’s thinks that the target of her last case Orson LeRoux (Darren Pettie) could actually be legitimately possessed and wants Bouchard to join him and his tech-advisor Ben Shakir (Aasif Mandvi) as a sounding board in his own investigation, noting the sometimes subtle differences between human evil and the potentially unholy kind. He wants to know if Leroux needs an exorcism or just a secure cell…and values the truth, whichever way it falls.

But Bouchard’s inclusion in Acosta’s investigation doesn’t go un-noticed by those who wish it otherwise and in the days that follow, she begins to experience strange night-terrors and a sense she’s being watched. Is her life in danger and if so, from whom or what? An encounter with another expert witness Leyland Townsend (Person of Interest‘s Michael Emmerson) does little to ease her unease, but one way or another Kristen hasn’t got where she is by running away. She’s going to  face her fears and use all her expertise to uncover the truth…

It would be easy to presume that new CBS show Evil was going to be one of two things: outright, abject and unapologetic spooky horror or an X-Files clone for the Conjuring generation. The truth is that it’s neither and both, the pilot episode at least being a far more nuanced outing for a primetime show than many will have expected  and one that consistently – and somewhat refreshingly – zigs instead of zags. Early on there are the requisite cornerstones of your typical supernatural outing: an imprisoned killer who suddenly starts speaking in tongues, strange and possibly unearthly sounds permeating around a house and a night-terror / sleep paralysis sequence with a strange visitor that doesn’t eclipse the benchmark equivalent in The Haunting of Hill House but is still unnerving in an off-beat way. It’s a show that feels as if it knows what you think is coming and then says ‘Are you sure?‘ Mirroring the serious remit of the team to explore all options and causes, the story constructs a story about deconstructing ‘facts’ through both faith and research and – though it doesn’t push too hard at network tv boundaries in format – it works within them in a subversive and interesting way and doesn’t give short-change to either.

There’s good drama to be had in a show where the team are largely divided on strategies – but it’s a very different vibe than the early chasm between Mulder and Scully. Perhaps more walky-and-talky than some primetime slots are comfortable with, it’s still refreshing in the current climate  to witness – even in a fictional situation – intelligent, constructive disagreement:  a willingness to not discount the other’s stance but be able to explain their own without it coming to disrespect or snark.  Bouchard says she totally believes science can explain everything that happens, however amazing  just ‘not all at once’ and cites helping the deaf hear again or landing a probe on a comet millions of miles away as ‘miracles’. Acosta counters with the observation that ‘Science is only good for repeatable phenomenon…and most of life, the most interesting parts… they don’t repeat‘. Those both feel like valid, considered opinions that each character is willing to respect in the other.

Herbers has just the right intensity for the role – her character dealing with the strains of a job that might qualify her for a job in Mindhunter with the normal stresses of running a household (her husband off enjoying the life she once did when she didn’t have as many responsibilities – so how long before that becomes a bigger issue?). Colter as Acosta ( or DaCosta in some publicity materials) still has the charismatic ‘stillness’ he showed in Luke Cage but in a role that requires less physical altercations per minute and arguably even a little too relaxed for a trainee priest. Michael Emmerson appears fairly late in the pilot and any memory of his more benevolent Finch in Person of Interest disappears in a performance that makes his LOST role as Ben seem like a well-adjusted teddy-bear. There’s also able support from Aasif Mandvi as Ben Shakir who’s the techie of the investigating team (a performer who seems to be spending much more time in straight drama roles than on the comedy circuit that made his name) and extended cameos for screen veterans Christine Lahti and Kurt Fuller. Euan Morton as ‘George’ also makes an impression.

The show comes from Robert and Michelle King, most famous for creating The Good Wife and in literally going from Good… to Evil, they’re remained sure-footed. While there’s certainly a recognisable, even well-trod, formula  as a starting-point, the show feels smarter than most in its execution, knowing that the right questions are as important as the right answers and populated by characters that have their stances continually questioned and grow from it. Though the ultimate question may be whether its slower and assured pacing will take hold in a primetime that prefers more categorised sf, car-chases, shoot-outs, faster results and pulse-pounding intrigue. Will the Kings be able to hold back the mountain of potential soapier elements that act as outliers in the pilot?  One hopes so. But if you demand a little more then this well-considered pilot will likely bring you back for more and if it can sustain that balance, Evil may turn out to have the goods. 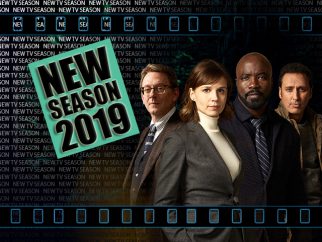