As the team investigate claims of possessed toys, David discovers 'honkytonk' and Kristen has a horrific case of bad egg-timing...

Kristen discovers that her missing egg from the RSM Fertility Clinic was not destroyed and has in fact been obtained by another couple – but given the fact the woman in question is now eight-months pregnant, what can she do?

As the team look into a case of possibly possessed toys, it seems the assignment may actually be at the will of the Vatican’s Entity group and that leads to friction between David and Kristen.

And elsewhere, just what has possessed psychiatrist Kurt to trust anything Leland has to offer?

Returning to some of the elements from previous seasons is a double-edged sword for Evil. On one hand it alleviates complaints that some of the numerous and seemingly important plates have been left spinning off-screen in favour of the episodic details and newer threats – yet on the flipside it also asks us to stop for a moment and remember where we were on those arcs. Some are more easy than others, but it’s moments like this when we could probably do with a more conventional and lengthy ‘Previously on…‘ starter.

Loyal fans will remember that our team had uncovered some unpalatable corporate secrets about the Invitro-services offered by the RSM Fertility Clinic, the company that originally helped Kristen conceive Lexis (Maddy Crocco). It seemed that the infernally-linked corporation had ‘accidentally’ kept one of Kristen’s eggs and were now had a raft of equally diabolic lawyers refusing to co-operate in returning it or clarifying its fate.  Given that Kristen has started to have night-terrors again, involving the demonic ‘George’ and now joined by a vision of Lexis as well – Bouchard checks in with her FBI friend who has been digging into the egg situation and can give her an update. It seems that after much legal-wrangling the business has accepted that the egg was not destroyed but was actually passed on to another fertility clinic where it has already been implanted into another couple. There’s little Kristen can do but fume and litigate  – the woman in question is nearly eight months pregnant and it’s her dream child. Trading carefully – and noting the husband’s growing unease about aspects of the pregnancy… because do fetuses growl? –  Kristen and the couple come to an agreement over the complicated situation: Kristen understands their feelings and unwitting participation and won’t involve them in any legal action but she will be part of their lives. She offers them the benefit of her experience as a mother and respects their boundaries but also being very aware that RSM didn’t go to all this trouble for nothing and that’s definitely not going to go unpunished. Of course, by the end of the episode we know that something terrible has happened, involving a sharp garden implement as a weapon…. it’s just off-screen but it has Kristen screaming.

(In one way or another Kristen is generally being put through the ringer. She decides to lay it on the line, summoning David and stating how disappointed she is that he’s been lying to her about his work with the Vatican’s Entity and wonders how much she has been personally compromised by working for the Church – was all that a part of Leland’s plan? Though David tries to assure her that his ecumenical work is his attempt to serve a greater good and that even he’s feeling compromised by his ‘spy-work’, it’s clear that it may take some time for Kristen and David to feel at ease with the situation.  Nor is Kristen aware that Sheryl has taken Lexis to meet Bouchard Snr.’s boss to test her awareness of the rising darkness – though it’s Sheryl who’s left disappointed or relieved by Lexis’ lack of reaction… and let’s not even talk about suckling a baby demon in what we hope was another dream!)

David’s tenure with ‘the Entity’ group is making his activities and job requirements seem like some weird Mission Impossible initiation with errands full of coded messages that he has to relay back to Victor LaConte (Brian d’Arcy James). It’s so overtly subversive and sometimes ridiculous that David himself openly ridicules it, saying it’s just a game to La Conte (La Conte replies that it is, but a very serious one). Which leads us back to the other dangling plot-line. Think back to last season and spiritual leader / mystic Grace Ling (Li Jun Li) was mysteriously snatched away, likely back to China. She’s been mentioned a few times this season, though I wish I could have gone back to see her introductory episode to remember everything. When David ultimately finds conflicting messages he has to pass on, he pushes back against LaConte and finds that the coded messages are helping her regain her freedom. While that’s good, it’s so convoluted and bizarre a strategy that the viewer is really just dragged along in its wake and even the successful and apparently safe reappearance of Grace doesn’t deliver with the impact it probably should.

The sub-plot involving Psychiatrist Kurt (Kurt Fuller) is meant to show how well Leland entices and tempts people to the dark side, but it’s been so easy for him to influence the doctor that it doesn’t quite convince. Being of sound mind and body (as much as anyone on the show) Kurt was shaken by his recent sight of a demon, but while that explains his need to gain insight, the hocus-pocus involved in the automatic-writing and agreeing to attend a reverse-seance and also undergo a possession as a victim seems like something he’d be drawing the line against well before it got to this level. It’s great to see subversion at work, but Kurt comes across as vulnerably stupid and almost comic relief rather than the desperate end of a Faustian pact. (And, again, the show casually explains Kurt didn’t snip Sister Andrea’s hair but collected it from her hairbrush… which still paints a disturbing picture as to how he got access.

The main plot is supposed to concern demonic toys but this is another example of an abstract ‘case of the week’ that is essentially dangled until we head into other territory. The faces on the cuddly toys changing into more fearsome expressions sounds like a fun story point – as is the dismembered figure inside an eight-ball-type decision maker, but if I’m right most of these occurrences were literally contrivances to get David to hear code-words and probably not genuine (though the digit turns out to likely be from an industrial accident in China). The case does give a chance for more of Asif Mandvi’s comic-timing as Ben and a jack-in-the-box with a mind of its own is a nice old-school scare.

As always, Evil remains a subversively fun and acerbic weekly watch, but closing in on the end of the current run (a fourth is confirmed), it may still be a case of how well the show-runners Robert and Michelle King can pace the final two entries and still keep everyone satisfied. It’s got no shortage of smarts but needs a bit more sequential answers and long-game pacing amid the imagery… 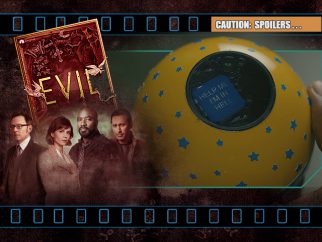