When a power-failure sweeps across the Long Island area, knocking out electricity and cell-phones, local sheriff Jo Evans (Allison Tolman)  is quickly roused from sleep and – making sure her father Ed (Clancy Brown) and daughter Bree (Ashley Aufderheide) are okay – rushes to the scene of what seems like a private plane crash on the nearby shoreline.

But as quickly as they were there, several NTSB (National Transportation Safety Board) agents are gone and suddenly the official line is that this was a downed drone. Nothing to see. Move along, now.

However, Jo can’t do that… because she knows it wasn’t a drone and now she’s found a young girl on the shoreline, one who has no injuries, but can’t recall her name or history. When the NTSB agents turn up again at the hospital and try to bully their way to the child’s room, Jo steps in… aware a growing number of things don’t feel at all right. Worried about the conflicting agendas, she decides not to enter the girl in the system until she knows more about who is interested in her and agrees to provide a roof over her head for one night.  Bree immediately takes to the young house-guest and they agree she should be called ‘Piper’ until her real identity is uncovered.

But when Piper’s so-called ‘parents’ show up to claim her, it does nothing to clarify the situation. Jo is not convinced by their story and the situation escalates when there’s an attack on Jo’s home. Now the police chief has no choice… she’s going to find answers: for the sake of her family’s safety and Piper’s future.

But is Piper actually more than capable of protecting herself?

I fully admit that when I saw the remit for ABC‘s Emergence there were barely average expectations. A law enforcement officer breaking the rules to protect a child from nefarious forces, a mysterious plane-crash, a conspiracy…all feel like a cluster of ideas that we see revolve from year to year like an annual primetime wheel of fortune. And all too often either the casting or the execution of such scuppers proceedings.  So coming away from this particular pilot episode it’s pleasing to note that while the feeling of ‘formula’ is strong, its execution is actually far better than expected and at least off to a good start…

If typecasting is a genuine problem then here is an actor probably faring better than most. Lead roles in such primetime shows often go to the overtly glamorous and it’s to Emergence‘s casting credit (and likely to Tolman’s award-winning success as another forthright, caring police officer in Fargo) that it has this striking – but far more relatable – performer at the head of the spear. She brings with her the more important smarts and heart needed for a role… one that could easily have been bland or generic in other hands. Tolman’s character is neither overly-warm or fuzzy nor cold and ambitious, she’s simply doing the best she can combining the demands of being both a single suburban mother and local police-chief and actually proving she’s rather excellent at both. Yes, there’s Jo’s slightly awkward but respectful relationship with her ex (Scrubs‘ Donald Faison), but that’s nothing dark in a show with a consistently light but reassuring touch.  There’s a touch of sarcasm and stoicism a’plenty, but there’s none of the acidic snark that’s become a staple elsewhere.

Though it’s tempting to lump in Alexa Swinton’s winning performance as  a powered-up poppet alongside Millie Bobbie Brown’s iconic Eleven in Stranger Things (technically, both have moments when they appear to telekenetically send cars cartwheeling), that mysterious element is really the only narrative parallel, with both shows having a distinctive tone of their own and different stories to tell. However both performers walk the line between scenes of wide-eyed innocence and more dangerous, tinderbox tensions and you’re likely to walk away from the pilot’s last scene wondering what direction the show will take.

Such structure will be key. Recent entries like Manifest have quickly become soap-operas with convoluted obstacles and even milestones like LOST floundered with made-up-as-they-went-along mysteries and a tendency to expand rather than explain. Ironically, Emergence feels more organic in its characters, something plenty of other shows miss out on, but the mythology will be important. However good Tolman and Swinton are (ably supported by the likes of the intimidating Clancy Brown as Jo’s reliable but ill father, The Mentalist‘s Owain Yeoman – using his real British accent – as an investigative journalist and Faison as the supportive ex), audiences will need to remain invested with the central puzzle of Piper (mutant, alien, or hints of an AI-evolving intelligence… plenty of routes to go down at this point). Those are significant plates to keep spinning in unison.So far the  familial set-up feels happily devoid of all but necessary contrivances (most character decisions are relatively logical and understandable in the circumstances) and there’s a lack of unnecessary ‘quirks’, but we’ll see if that can be sustained.

If far from a bonafide, guaranteed hit, it’s definitely one to keep an eye on because of the people involved (including the talent behind the scenes such as creators Tara Butters and Michele Fazekas and the writers’ room) and it will at least be interesting to see what comes next… 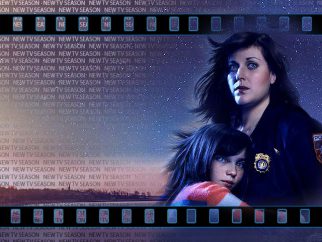