It's only taken a decade for Marvel to accept the potential of a female-led tentpole blockbuster and 'Captain Marvel' certainly delivers an overdue and satisfying romp...

The Kree warrior known as Vers (Brie Larson) could be one of the best soldiers in the Supreme Intelligence’s attempts to keep the galaxy in order, though Vers is warned by her mentor Yonn-Rogg (Jude Law) that her emotions make her powers unstable and a risk to herself and others.  But Vers can be headstrong and is driven to prove herself, especially as she only remembers fragments of her past before joining the elite guard.

Some of those memories appear to be restored when she is captured during the defence of an outpost – one that turns out to have been infiltrated by the shape-changing race known as the Skrulls. Eventually escaping and pursuing the fugitives to Earth, Vers begins to realise this is  not her first time on the planet and that the visions she’s having are linked to an alien encounter covered up by the government and the life of a pilot long since believed dead. The pilot was called Carol Danvers.

But when it becomes clear the Skrulls may have infiltrated Earth’s fledgling defence organisation SHIELD, who can she trust to give her the genuine answers she seeks and deserves? Perhaps a woman named Maria Rambeau (Lashana Lynch) and a man named Nick Fury (Samuel L. Jackson)…

From the very first moments, when you realise that Marvel have tweaked their logo to show not their usual superhero line-up but to highlight their late mover-and-shaker Stan Lee in his many cameos, audiences are likely to know that their latest visit to the MCU is going to be a powerful treat… and while not perfect, it’s still as much a guaranteed Blockbuster as the video store into which the titular hero crash-lands.

Captain Marvel achieves the remarkable ability to be both retro and relevant. It talks to timeless issues of fight-or-flight, military strength, fluid morality as much as alien autopsies and Nineties soundtracks. Flipping the bird at the executives and internet trolls that bizarrely doubted the mere idea and value of a woman-led superhero flick on some misguided innate level, it thrusts a female superhero and potential role-model to the forefront of the 2019 box-office (with a message of empowerment and self-belief that’s pro-female while never being anti-male) but simultaneously giving us some knowing nostalgic riffs courtesy of the 1990s setting. In that sense it cleverly feels gloriously contemporary while also laying a garden of retrofitted easter-egg groundwork for the fledgling Marvel Cinematic Universe we’ve since experienced.

Larson, who won the role over stiff competition and already has an Oscar win in her resume,  provides audiences with a character who is guaranteed to become a favourite. Larson’s Danvers fluctuates between cocksure warrior and adrift, distrusting loner and yet is given a consistent throughline full of heartfelt moments as she picks at the scabs of her fractured memory. And in many ways, this is an origin story in reverse – presenting a character who is already in a hero mould and letting her and the audience discover pieces of her past that take a while to fit together for the bigger picture. Initially, that makes some of the earlier scenes seem confusing or disjointed and the movie doesn’t really start to coalesce until its second act. This is a film where you might have to just go with the flow for a while as it deconstructs one story and constructs another.

There are nice sleights of hand in the mix, moments when the film unexpectedly zigs instead of zags on a number of levels, sometimes for the sake of a singular punchline or pay-off, others in more fundamental plot-changing ways. In the latter sense, the strategic marketing has played some of its cosmic cards close to its narrative chest and slyly enough to catch some off guard. (Worth noting: Stan Lee’s official cameo in the film – his final appearance will actually be in Avengers: Endgame – is perfectly pitched: smart, knowing, short, sweet and ‘ordinary’ but touching all the same.)

Fine, the idea of talking on a pay-phone to the other side of the galaxy stretches suspension of disbelief to light-year levels when used more than once to make some connective tissue, but – hey – the Doctor has done worse and at least she doesn’t reverse the charges. Also, the good Captain’s power-levels and power-set seem to fluctuate and aren’t that well-defined given changing circumstances (does she need a helmet in space or not?). Effects-wise, the film delivers pretty much what you’d expect by now, with explosions, atmosphere-bouncing dog-fights and some impressive hand-to-hand combat between various members of the cast and their antagonists as they battle across trains, planes and automobiles. The skrulls themselves are well-rendered, able to be both comical and sinister at different moments – a case of the make-up and CGI visages feeling less distracting than hearing Ben Mendelsohn’s somewhat heavy Australian cadence emerging from their leader (though the actor certainly has fun).

Samuel L. Jackson gives us a laid-back Nick Fury, far different from the clipped authoritarian of the modern era and has some fun with the audience as we eyeball the possible reasons for his future lack of interest in 3D movies.  Lashana Lynch gives strong support as Maria Rambeau, Carol’s closest friends from her days in the Air Force and a much-needed anchor for her return. As mentioned elsewhere, the base’s cat ‘Goose’ (named after the character in Top Gun, part of the obvious genetic make-up of this film) steals more than a few scenes.

Will Captain Marvel have the same success and reach as the game-changing Black Panther? That’s hard to say as last year’s Vibranium-powered entry had some deeper-set elements (subsequently highlighted by its winning of Academy Awards in various design departments) and thematic, tactile ingredients for a genuine cultural impact. Though there’s clearly a case made for its fresher gender representation here, Captain Marvel‘s success is perhaps less about changing the landscape in overt ways, but simply ignoring those presumed gender presets and getting on with entertainment. For instance, while there’s much to praise about Wonder Woman, even that important entry felt the need for an obligatory love interest. Captain Marvel, tellingly, doesn’t need such fluff and it’s not remotely missed when it’s got sisters doing it for themselves.

Ultimately, the simpler truth is that Captain Marvel – directed with aplomb by Anna Boden  and Ryan Fleck (who also co-wrote the screenplay) – has all the ingredients needed for an entertaining romp full of  spectacle and heart… a Men in Black vibe from the lady in red, blue and gold. Nothing more, nothing less. It deserves all of its inevitable success and the box-office will face stiff competition to surpass an entry that has as much unapologetic fun along the way. Of course, as the mid-season credit scenes reminds us,  Avengers: Endgame is already on its way as a kind of immediate tail-spinned sequel for the good Captain with a bastion of cosmic bravado and so it could still be up to that challenge… we’ll know soon enough. 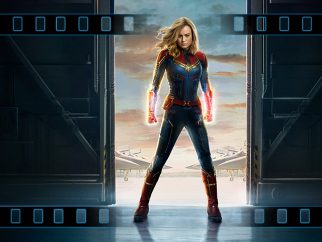