Star Trek's latest incarnation goes back to its very earliest - as 'Discovery' returns to Talos IV...

Spock and Michael head to Talos IV, knowing full well the strict regulations that should prevent them from venturing to the planet’s surface.  Spock has been there once before but this time there could be less reason to smile. When they arrive at the set co-ordinates, it appears a black hole has consumed the planet – but surely that’s impossible?

As Spock relates what really happened in the preceding months and the connection he made with the Red Angel, Pike gets an impossible  communication from an old friend, one who tells him to trust his crew and his instincts. But how far will Pike go to keep promises old and new… and what will the cost be when Section 31 intervenes once more?

One suspects that the latest episode of Star Trek: Discovery  – entitled ‘If Memory Serves…‘ – will have those who remember the 1960s version of Trek salivating and those more casual viewers scratching their heads just a little… because of all the episodes to date (possibly, ever) this is the one most deeply steeped in established in the deepest, earliest parts of Trek lore and thrives on your knowledge of it. That’s true to such an extent that the first five minutes – ahead of the main titles – is essentially reserved for incidents from the Original Series and footage previously only seen in The Cage / The Menagerie. It features Jeffrey Hunter as Christopher Pike and Susan Oliver as Vina  (not to mention Leonard Nimoy as Spock). This means that by the time we segue into the main episode, which fits in  the timeline between the events of those episodes, we’re being asked to accept the characters suddenly being played by their newer counterparts.  That’s something of a leap, if a necessary one, but if you go with it, then there’s plenty of rewards for doing so and its undeniably a tribute to Anson Mount and Melissa George that they handle their side of the balance with aplomb. Design-wise, this is  also one of those occasions where Discovery‘s editing and design departments definitely excel themselves by having well-judged call backs to those old episodes (the ringing plants, the Talosian make-up and scene-shifts etc) that don’t seem out of place.

This is the first time since his casting that Ethan Peck really gets to give us his fuller version of Spock and while he has a lot to live up to, he also handles things well enough – a cold and clinical Vulcan with just the hint of suitable wry, dry-witted humanity when the moment calls for it.   While you can complain about how long it’s taken to get to this proper introduction to Spock, it may have been worth the wait, if not the exact meandering route. What’s most interesting is that the events of ‘If Memory Serves…‘ essentially explain why the Spock we saw all those years ago in TOS‘s The Menagerie felt so indebted to Pike and was SO committed to returning him to Talos IV.

The Red Angel arc gets some lip-service – largely the maguffin that drives the reasons for people being in situations rather than on the situations themselves. The awkward relationship between Stamets and the resurrected Hugh is also included, but however heartfelt and touching it feels more like a few moments of filler or perhaps a placeholder for later.

All in all, this is not an episode for casual viewing, but one for the die-hard Trek fans, a love-letter to its origins with promise for the future. 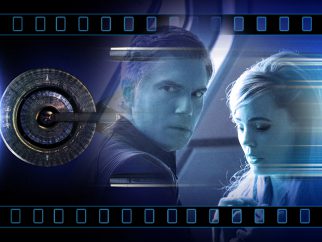