The latest take on the characters created by Stieg Larsson shifts Lisbeth Salander centre-stage but into distinctly super-human, super-agent territory...

Notorious hacker and punisher of evil men Lisbeth Salander (Claire Foy)  returns to her base of operations and receives an offer that intrigues. A man named Frans Balder (Stephen Merchant) is horrified that the computer program he created is going to be used less scrupulously by the American paymasters. The program, known as Firefall, can control any nuclear warhead anywhere in the world. It can not be copied but it can be moved… and Balder needs Salander to move it away from the heart of the NSA database.  But when she successfully completes the hack and fails to turn up, he believes he’s been double-crossed and notes that the complications could now be even worse.

However Lisbeth had every intention of honouring her mission until there were… complications. Now, she, Balder and his autistic son August are in serious danger from multiple sources: the NSA who want their program back, the Swedish government who want to know where the Balders have gone and a shadowy organisation spoken of only in hushed whispers… who call themselves the Spiders.

And at the heart of the web is a secret that Salander believed dead and buried… but one that could not only kill her, but endanger the whole world… is the only person she can truly trust actually Mikael Blomkvist (Sverrir Gudnason) the very man who once  made his name exposing her life-story?

The Girl with the Dragon Tattoo was a best-selling book and an acclaimed start to a best selling trilogy of stories that detailed the uneasy relationship between a crusading Swedish journalist and an emotionally-fractured cyber-hacker – each playing their part in taking down a massive conspiracy. Told in icy Nordic style, brutal and uncompromising on a variety of levels, it made waves internationally and also generated a Hollywood remake of its first chapter.  It was a compelling calling card for everyone involved – even if author Stieg Larsson died before it achieved its wider success. The Girl in the Spider’s Web is based on many of the same characters, though taken from the novel subsequently penned by David Lagercrantz after Larsson’s passing.

Claire Foy is the latest actor to take the central role of hacker Lisbeth Salander. Foy is in fine form, as always. Following the etiquette that dictates serious actresses should have at least one mainstream vigilante in their resume, her version of Salandar adds yet another string to her quiver of excellent and incredibly diverse roles (in the last few years alone she’s appeared in the couldn’t-be-more-different UnSane, The Crown and First Man). But it’s arguable whether ‘…Spider’s Web‘ itself adds anything deeper to the central character.  Noomi Rapace, the original and still definitive Lisbeth by a good Nordic mile, had a fractured, gothic appearance that spoke to both intimidating physicality and steely contempt to how she was perceived by others.  The US remake of ‘…Dragon Tattoo‘, flawed in its familiarity but well-intentioned, at least gave Rooni Mara an askew demeanor. But far from being an outlier and outlaw, Foy’s vigilante hacker looks and feels perfectly calibrated, a loner designed not by tragedy but by marketing committee.  The leather is perfectly scuffed, the ruffled hair is perfectly disorderly, it’s all very co-ordinated and connected. As she appears like a hooded graphic novel ghost from the shadows to wreak vengeance on abusive men, roars away from her makeshift, hotwired super-secret headquarters, speeding across a frozen lake on a Ducati or steals a Lamborghini Aventador from a high-rise car-park,  the perfectly displayed product-placement of impossibly expensive accessories speaks more to Gotham City grandeur than alienated grunge and goth. This is Catwoman chic via Skid Row Chanel.

And when the feature film isn’t busy being batty, there’s an equally distinct James Bond vibe. A nefarious organisation with a mysterious boss and a sinister moniker, a computer program that can hijack every nuclear warhead on the planet, a gun that can kill from a mile away, duelling government agencies, disposable henchmen and limitless bullets – move over, 007, the Spiders have their own silky Spectre!

The character of crusading reporter Mikael Blomkvist was the main role in the original Stieg Larsson trilogy (which comprised of  The Girl with the Dragon Tattoo, The Girl who Played with Fire and The Girl who Kicked the Hornet’s Nest) but here he’s largely there in support as Lisbeth takes the spotlight. Sverrir Gudnason gives us a decent but rather unmemorable take on him that, once again, isn’t as dynamic as the original version (essayed by the late Michael Nyqvist). Sylvia Hoeks (seen in Berlin Station and soon to play the title role in a Sylvia Kristel biopic) slinks across the scene effectively as the vengeful Camilla and actor/rapper Lakeith Lee Stanfield’s turn as a desperate NSA agent is fun.  The wider supporting cast are a mixed bag. American actor Christopher Convery is quietly stoic as the young prodigy August Balder, fitting in to that other cinematic staple of making every autistic child a super-genius and Stephen Merchant as his computer-programmer father Frans keeps the laconic, always slightly embarrassed gait and cadence despite playing it all with suitable seriousness.

The finished film, directed by Evil Dead helmer Fede Alvarez (also inked to direct the Labyrinth re-imagining) is perfectly fine for what it is, mixing cyber-crime and almost Siberian temperatures… but it may be too whizz-bang for those appreciated the original trilogy and too slow for the Mission Impossible crowd.  If the anarchic but dour Swedish tone and the hi-tech, faster American elements clash rather than blend together evenly – and they don’t work as much as one might hope – then the result is still a decent if uneven and yet wholly predictable beat-for-beat thriller: visually enjoyable but not narratively memorable.

‘The Girl’ has now had her story told repeatedly, too often framed by the men who ruined it, and it might be nice to see the Woman who rose from the ashes, rather than the studio looking for a new franchise… 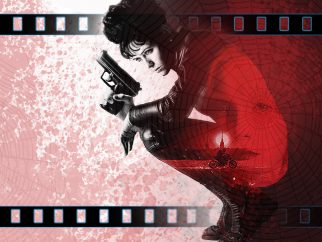