As a cinema reboot is readied, SyFy have taken possession of the rights to make their own series of the demonic doll franchise...

Cinema’s most famous demonic doll (and, let’s be fair, nowadays that’s a growing niche market) looks set to be swapping the big screen for the blood-soaked televisual variety with SyFy announcing a Chucky series.

Rumoured for quite a while and the subject of bidding rights, SyFy are now developing the show based on the Child’s Play film franchise about a doll possessed by serial killer Charles Lee Ray.  The original film was released in 1988 and featured veteran character actor Brad Dourif providing the voice of the killer character – with able support from the likes of Catherine Hicks and Chris Sarandon and Alex Vincent as their young son Andy, the immediate subjects of ‘Chucky’s’ wrath.  Though later movies would become known for their black humour and over-the-top set-pieces, the first outing was played largely as a straight-up if unapologetically supernatural thriller. Dourif voiced Chucky in all the sequels and the growing Andy/Alex would return for the first sequel in 1990 and also Curse of Chucky (2013) and Cult of Chucky (2017).

Cult of Chucky actually saw Charles Lee Ray’s persona jumping out of the doll and into the human body of Nica Pierce (played by Dourif’s real-life daughter Fiona Dourif). Few specifics of the series are known at this point, but Brad Dourif, soon to be seen in the Deadwood revival, is likely to reprise his key role and Mancini has talked about making the show ‘darker than ever before’. 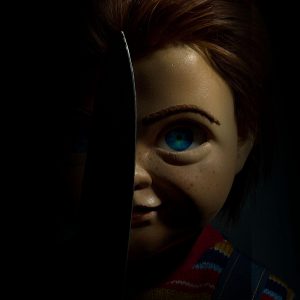 A Child’s Play cinema reboot of the original film is also in the works and was shooting in Canada at the end of 2018 for a June 2019 release. It stars Aubrey Plaza, Bryan Tyree Henry (Atlanta) and Gabriel Bateman and is directed by Lars Klevberg.  Dourif will not be providing the voice for this version but it has not yet been announced who will take on the Chucky persona.

An early image (left) showed a slightly re-imagined Chucky doll, conceived to be more ‘A.I.-driven’ in this incarnation. The imagery and set-up received a decidedly mixed reaction from existing fans.