'Spinning Man' sports an eclectic, talented cast but its meandering exploration of 'truth' simply doesn't deliver on its promise...

Evan Birch (Guy Pearce) teaches philosophy at the local college and specialises in linguistics – the art of saying, or not saying, what one means by carefully choosing words. He has a reputation as a strong but diffident academic, the kind that is smart but not always easy to get along with. That being said, rumours persist that he and his wife Ellen (Minnie Driver) and young children moved to the vicinity of Pearce College because of Evan’s alleged dalliance with a student in his previous job and it appears that he still attracts a lot of female attention.

That fact works against him when a local cheerleader, Joyce Bonner (Odeya Rush), goes missing and one of the few potential clues is an older man seen near her last known location by a nearby lake and in the vicinity of a grey car. Birch was near the lake and drives the same kind of vehicle.  When approached by the investigating team led by Detective Malloy (Pierce Brosnan), he bristles at their attitude and their immediate expectance he will comply with all their requests to let them examine his vehicle. He denies them permission and though the decision is respected by his savvy attorney (Clark Gregg), it makes Malloy even more suspicious of Evan’s behaviour.  When some of the claims Evan makes about his movements and of no interaction with the girl start to fall apart, it becomes a case of not only knowing what the truth is, but how any of it could be proven.  Is a provable lie as good as a confession of guilt? As Mallory, Ellen, the college staff and even Evan himself begin to question the facts of the case and their own memories of what happened, will it be possible to discover Joyce’s actual fate and the impact it will have for everyone involved?

The presumption we have going in is that Spinning Man will spin a yarn where we’re not entirely sure who’s done what and why but we’ll find out… and on a basic level it’s entirely true that by the time the two hours of screen-time are up, the audience will be told what happened – but when it comes it is presented as a side-dish on a feature that is far more a character study of behaviour than an a whodunnit. It’s a tale that about philosophy and in true form it waxes philosophical, never making a point it can’t circle, study and write a thesis upon before dissecting and leaving discarded when something else takes its fancy because it’s all subjective anyway.

Pearce gives us a man that we’re not meant to like, even if he occasionally has a sliver of our pity. He’s the kind of annoying guy who can scold you for splitting an infinitive, knows the difference between ‘Can I..?‘ and ‘May I..?‘ and has read enough libraries on the subject of philosophy to justify any argument or stance or moral foundation he chooses to select. In short, he’s a book-smart man but one who has lost his sure-centre because of it – the ‘stuck-in-neutral’ position of someone who feels there’s always a counter-argument and feels superior when he gets to mansplain that to others.

To illustrate, there’s a moment in Spinning Man where Pearce’s lecturer in search of ‘absolute truth’ sets his class the task of proving that a chair he’s placed at the front of the room is actually there – pointing out the difference between knowing something and being able to express it as an absolute certainty rather than as a perception. Your mileage on whether that’s an intriguing argument, a valid study of linguistics or just an utter pretentious waste of time may vary.  In the same way, the film strokes its metaphorical chin, glances nonchalantly towards the audience and says ‘It’s one thing to explain it, but isn’t it far more interesting to study the effects of it all and ask what ‘truth’ really means in consequence?’

To which the answer is, at least this case, a resounding ‘No. Bollocks to that. There’s definitely a chair there and I want my bloody resolution’.

What may have worked better on the original printed page of George Harrar’s book or as a far off-Broadway stage-play, feels like a dry, unsatisfying sleight of hand on the screen as the film meanders along for most of its running time giving us plenty of moments that seem loaded with significant and portentous elements and then simply hits the brakes just as you’re expecting something meaningful. We see Birch’s momentary fantasies about some of the young girls he encounters and which might seem deliberately damning, but though they paint him as something of a lecherous creep, the film tries to muddy the waters by also pointing out that there’s no initial proof of anything other than a dirty, distracted mind – especially when compared to some of Evan’s more overtly lecherous lecturers and colleagues.

Pearce, a strong actor who was once firmly on the fast-track to mainstream recognition, now specialises in these awkward outliers – in the sense of both characters and films, finding his niche in  sometimes unsettling personas and in that sense it’s spot-on casting. Pierce Brosnan is getting more meatier parts as he grows older, able to play hero or villain and his Detective Malloy has just the right amount of dogged determination, frustrated but not for one second intimidated by Evan’s attitude as the investigation inches forward. The best moments of the film are their head-to-heads, each deniably needling the other in search of firmer ground.  Minnie Driver as Evan’s tolerant wife Ellen always seems on the verge of a more significant performance, but for most of the film is a frustrated, reactive role that never quite explodes the way you want it to.  Clark Gregg, on loan from Agents of SHIELD is wasted in a couple of throwaway scenes and though Alexandra Shipp smoulders as an smitten pupil, there’s only so much that can be done with an under-written part.

By the time the final credits roll, it’s both a relief and annoyance and though linguistic experts and philosophers could arguably argue the merits of ‘absolute truth’ forever, it’s likely the majority of Spinning Man‘s audience will have loss interest and flicked over to Netflix in search of a better yarn.

Spinning Man is now available on DVD in the UK and US. 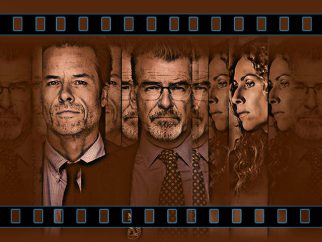