Revenge is a dish best served hot in this superior Middle-East thriller...

It’s 1972 and like almost any other time in its existence, Beirut is a tinderbox of conflicting agendas often held together by hope, anger and pragmatic alliances against other enemies. Mason Skiles (John Hamm) is a fast-talking diplomat, a respected negotiator and mover and shaker of legendary ability who has been able to avoid most of the pitfalls of the dangerous job. He knows all the players and genuinely cares about the getting the best outcome for everyone. But one night he’s approached by a friend and colleague, Cal (Mark Pelegrino) and told that the young boy that Skiles and his wife hope to adopt my have familial connections of interest to the CIA. It’s a revelation that Skiles is sceptical of, but it leads to a tragedy that sees Skiles heading back to the US and vowing never to return.

Ten years later and that resolve is going to be tested.  Miles, now forced to use his talents to work on far smaller domestic union disputes, is approached to attend a teaching conference back in Beirut. He’s tired, weathered and too often finds solace in a bottle but his radar is still sharp enough to know when he’s being played, especially when the money is as good as is being offered. He takes the flight but has no intention of being back there any longer than he has to be. After all, the area holds too many bad memories and has not get any less dangerous, far from it….

Feeing like a directorial mix of Oliver Stone when his talent still matched his cynicism (which would have been some time ago), the late Sydney Pollack with his mastery of cranking up tension-filled conspiracies and Aaron Sorkin with his deft ability to make walking and talking a badge of honour, Beirut is a  dusty, sweaty and compelling slice of geo-political intrigue helmed by Brad Anderson that evokes not just the Eighties but sadly serves as a timely reminder that the more things change etc etc…

Though it’s the type of film we’ve seen before – essentially using a stranger in a strange land / war zone as a metaphor for internal angst and conflict – it’s handled stylishly by a talented cast and aided by strong cinematography and an intelligent if sometimes weighty script. With the potential betrayals in the air and administration vultures circling, it helps to have some historical knowledge of  the various factions who were the most active in the region during the Eighties, but the emphasis on the various deal-making and deal-makers rather than examining and evaluating their various causes. It is the kind of multiple cat-and-mouse title that could (and arguably should) have got a much wider cinematic release in the US (where it was released in April). Beirut and his Skiles’ journey land somewhere between George Clooney’s Syriana and Michael Collins outings and frankly, it’s a mystery as to why Hamm isn’t getting the same recognition that gave Clooney such acclaim.  Hamm shares not just the same chiseled good looks and ability to pick memorable (interesting, but not always flattering) roles but also enough genuine screen presence to deliver on that range. Yet somehow, the strong performances and easy charisma don’t get as many column inches and award-recognition.

Rosamund Pike is another often under-rated actor with range and though she’s strictly in a supporting role here, she gives conflicted officer Sandy Crowder a well-rounded persona that isn’t the usual ‘love-interest’ template. Breaking Bad‘s Dean Norris oozes corruption, plaing an oily CIA honcho – initially unrecognisable under a wig that makes him look more like Elliot Gould in Ocean’s 11. Shea Whigham, Larry Pine and Mark Pellegrino all make the most of their screen-time.

Generally dark and ominous in tone, there are still moments of gallows humour: a hotel sign instructs guests to refrain from coming out to take snaps of any bombings and, poignantly, a wedding photographer shoots his subjects (only with a camera) amongst the rubble. But the sense of inevitable tragedy is never far away.

Creating less of a splash that one might have expected, it’s definitely worth catching as long as you aren’t expecting an action’ fuelled piece. This is certainly an outing that deals more with a case of diplomatic impunity. A delayed UK cinema release retitled as ‘The Negotiator‘ in August may also help raise its profile.

Beirut is released on DVD on 3rd July in the US 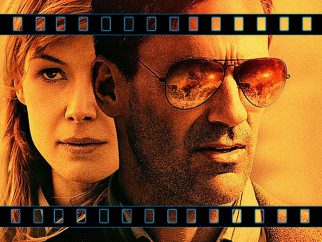